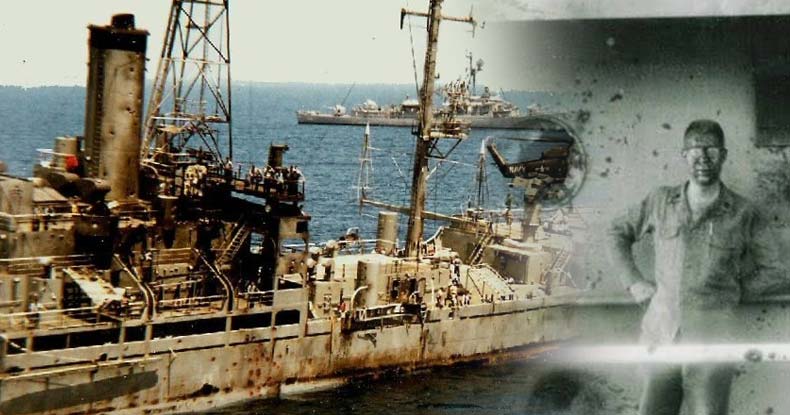 JEA: James M. Ennes was one of members of the USS Liberty and the author of Assault On the Liberty: The True Story Of The Israeli Attack On An American Intelligence Ship. I did correspond with him decades ago, and his assessment was that Israel bombed the USS Liberty deliberately. The US should start putting Israel on a financial diet, but political whores aren’t willing to do that.

The USS Liberty is lumbering in international waters. It is flying a brand new 8’x5’ flag, which unmistakably identifies it as a U.S. vessel. The ship’s markings are ten feet high on both sides. It is not a warship. It is an intelligence-gathering ship. For all intents and purposes, it is defenseless against any warship or attack aircraft, having but four .50-calibre Browning machine guns without shrapnel shields as its only offensive weapons. On board are 294 souls.

Suddenly, and without provocation, Israel attacks the ship with unmarked warplanes (using French Mirage jets) and torpedo boats. For over an hour, the helpless ship is riddled with machine-gun fire, rockets and torpedoes.

Much of the ordinance Israel used in the attack on The Liberty was provided by the United States.

Within moments, the ship is completely disabled. As it seems certain that the ship will sink, lifeboats are lowered, but Israel’s attacking torpedo boats immediately riddle the lifeboats with gunfire. Helicopters from Israel carrying Special Forces troops hover over the ship, which is now listing at nine degrees.

Clearly, Israel intends that no one survives.

The ship has no engines, no rudder and no power. As the Special Forces soldiers from the attacking country are being positioned to launch their final assault, The Liberty’s Captain barks, “Standby to repel boarders.” One sailor yells, “They’ve come to finish us off.”

The 67-minute attack would prove to be the bloodiest assault on a U.S. ship since World War II.

When the attack first began, American fighter jets were dispatched to assist the American ship and its crew, but those jets were turned around—BY THE WHITE HOUSE, specifically President Lyndon Johnson and Defense Secretary Robert McNamara.

Thirty-four of the ship’s officers and crew are killed, and a majority of the rest of the crew are wounded. Only a divine miracle and superhuman, Herculean effort from the sailors in the bowels of that steel graveyard keep the ship afloat.

When the attack first began, one Israeli general protested to his commanding officer saying, “This is pure murder.” One Israeli pilot refused to attack the ship because it was American. He was imprisoned by the Israeli government. But many of the Israeli pilots shouted with glee when they saw The Liberty burning.

“Great! Wonderful! She’s burning! She’s burning!” transcripts show one of the Israeli pilots shouting during the attack. Transcripts also proved that Israeli attackers had positively identified the ship as being American a full 26 minutes before launching the torpedo attack.

Now get this: Instead of sending The Liberty to the nearest safe port, which was Crete, only one day’s sail away, Navy commanders ordered that the ship go to Malta, a seven-day journey across the deepest parts of the Mediterranean Sea—with the ship now listing at fifteen degrees. Obviously, the White House was certain that The Liberty would sink before making it to Malta.

But the ship didn’t sink.

When the White House knew there would be survivors who could tell the truth about what happened, it immediately employed a massive cover-up to conceal the facts of the attack. It began with a psyops public declaration that the attack had been an “accident.” But the attack was never really investigated.

There was no need to investigate; everyone in the upper echelons of the U.S. government knew what had happened. In fact, those at the very top were co-conspirators in the attack.

“The Navy was ordered to hush this up, say nothing, allow the sailors to say nothing,” said Rear Admiral Thomas Brooks, a former Director of Naval Intelligence. “The Navy rolled over and played dead.”

Israeli diplomats tapped influential American Jews, many of whom were close friends with President Johnson, to help with the cover-up.

Documents show that Eugene Rostow, who was third in command of the State Department, repeatedly shared privileged information about U.S. strategy with Israeli diplomats. Others who assisted Israel included Supreme Court justice Abe Fortas and Arthur Goldberg, who was the U.S. Ambassador to the United Nations. Many of these and others who helped the embassy are referred to by code names in Israeli documents. For example, Democratic fund-raiser Abe Feinberg is identified in Israeli records by the codename “Hamlet.”

Israeli diplomats likewise hammered the media to kill critical stories and slant others in favor of Israel. Diplomats hustled, for example, to derail a potential news story about pressure on New York Representative Otis Pike to launch a congressional investigation into the attack. “We have made sure that the journalistic source will refrain from writing about this for now,” cabled embassy spokesman Dan Patir.

Johnson, whose focus largely was on Vietnam, looked for a compromise that would guarantee that American families were compensated but would not risk a clash with Israel’s domestic supporters. He ordered Nicholas Katzenbach, second-in-command at the State Department, to negotiate the deal: If Israel publicly apologized for the attack and paid reparations, the United States would let it go, no more questions asked.

Captain Ward Boston, the lawyer for the Liberty court, broke his silence in 2002, stating that investigators were barred from traveling to Israel to interview the attackers, collect Israeli war logs, or review communications. Furthermore, he said Johnson and Defense Secretary Robert McNamara had ordered the court to endorse Israel’s claim that the attack was an accident, which Boston personally did not believe was the case. “I am certain that the Israeli pilots that undertook the attack, as well as their superiors who had ordered the attack, were well aware that the ship was American.” (Source)

To this day, the Israeli-controlled mainstream media refuses to say a word about the attack on The USS Liberty. And not one single U.S. president (including Republicans) has given the surviving crew of The Liberty due public recognition—not Nixon, not Bush I, not Reagan, not Bush II and not Donald Trump: All of them gave The Liberty survivors the royal snub.

And when is the last time you heard any Republican House or Senate member say anything about The USS Liberty? No one in Congress will talk, because the vast majority of them—Republicans and Democrats—are bought off by the Israeli lobby. And the ones that aren’t know that their future careers—and maybe even safety—depend on their silence.

The only two members of Congress that I can personally remember who were willing to blow the whistle on the Israeli attack on The USS Liberty were both Democrats: Cynthia McKinney from Georgia and James Traficant from Ohio. And we all know what happened to each of them.