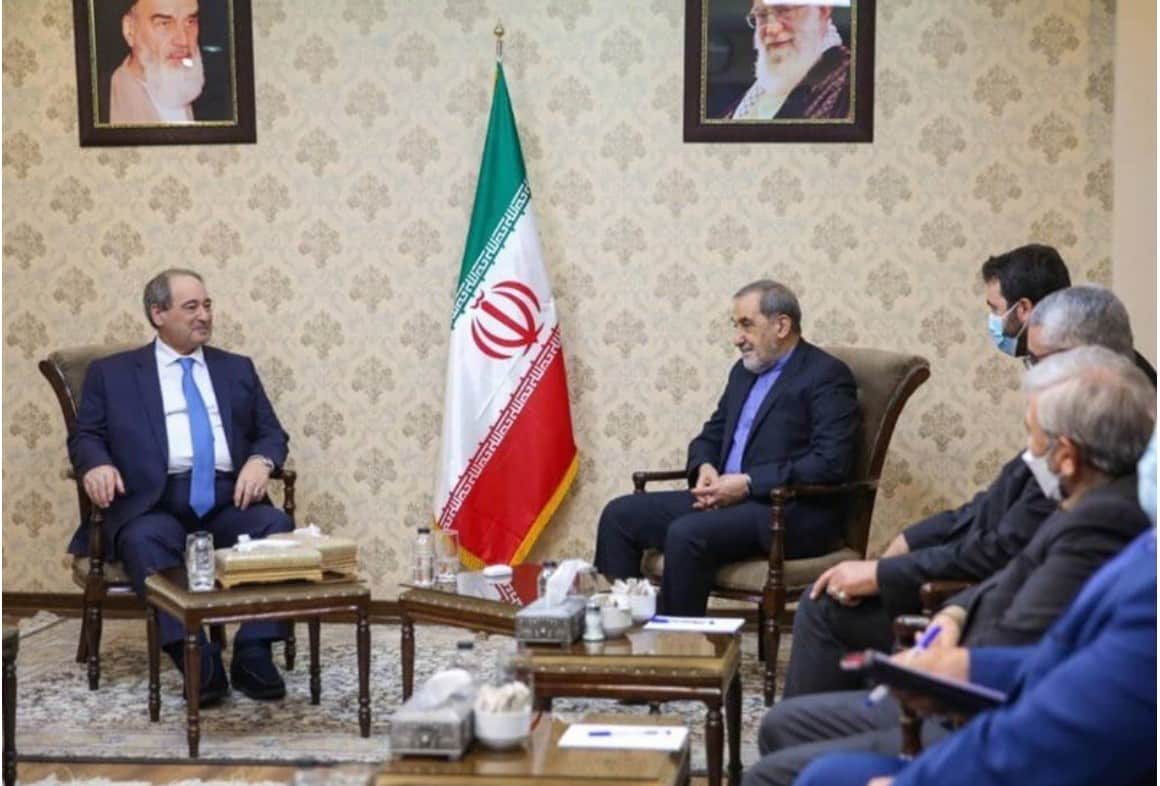 TEHRAN — Syrian Foreign Minister Faisal Mekdad met on Tuesday with Ali Akbar Velayati, advisor to the Leader of the Islamic Revolution on International Affairs, to discuss bilateral relations as well as international and regional issues.

During the meeting, which was also attended by the Syrian Deputy Foreign Minister Bashar al-Jaafari, Velayati stressed the strategic relations between the two countries, as well as the need for special focus to promote relations between Iran and Syria.

Syria has been at war with foreign-backed militant and terrorist groups terrorists since 2011.

“The confrontation with the enemies in Syria continues, and the alliance of the countries of the Resistance Front in recent years has made it possible to take effective, successful and unprecedented measures against the continued domination of foreigners in this very sensitive region, coveted by the United States and Britain in the past.”

The veteran politician added that the formation of the resistance front which has achieved great successes has given the Islamic world hope that with the resistance the aggressors can be humiliated.

“What the Syrian president has done in recent years against the cowardly invasion of some countries in Syria with the leadership of the United States, the Zionists and some reactionary countries in the region, is unique in its kind,” he noted.

He then reiterated that this couldn’t be achieved without the support of Iran, Russia, Hezbollah and most importantly the resistance of the brave Syrian nation.

Elsewhere in his remarks, the advisor to the Leader said, “The Yemeni resistance has defeated the occupiers and will soon force them to retreat. We will soon be witnessing an independent, powerful country and a strong supporter of Islamic values.”

Saudi Arabia which has been bombarding Yemen since March 2015 is pressing allies to supply additional missiles for its U.S.-made Patriot air defense systems as its conflict with Yemen’s forces once again intensifies.

Riyadh has asked both the United States and certain European states to provide additional munitions for its Patriot systems, The Wall Street Journal reported on December 7.
The request comes as missile and drone attacks from Yemen into Saudi Arabia have spiked in recent months, with more than 20 drone strikes and 10 ballistic missile strikes landing in both October and November of this year, according to the report, which cited a Saudi government official.

This shows that the Islamic world has realized that reliance to aliens is a thing of the past.

The advisor to the Leader was indirectly referring to a move by certain Arab countries to approach Syria. The recent visit by the UAE foreign minister to Damascus and his meeting with the Syrian president is an example.

There are even talks of readmitting Syria to the Arab League.

Velayati also predicted that Lebanon will leave behind these difficult days created by U.S. sanctions on Beirut.

“Undoubtedly, the Lebanese people also will overcome the problems created by the United States and its mercenaries in the region and will continue to resist as the flag bearer of Lebanon’s independence and territorial integrity.”

In late October, Saudi Arabia also cut economic and diplomatic ties with Lebanon under the pretext that Lebanese Information Minister George Kordahi had criticized the Saudi war on Yemen.

However, Kordahi resigned on Dec. 3, saying he was putting the country before his personal interest to help end a dispute with Saudi Arabia brought on by his comments.

Velayati reiterated that Lebanon is among the countries of the Resistance Front that can be a model for the whole world with its positive effects in recent years, which is unique in contemporary history.

For his part, Mekdad thanked Tehran for its support to the Syrian people and government and pointed to the key importance of Damascus-Tehran relations, saying a meeting between the presidents of the two presidents can mark a turning point in relations.

“The relations between the two countries are very important and the meeting (between the two presidents) will take place after the necessary preparations are completed,” Mekdad pointed out.

Syria’s chief diplomat also said, “The interaction and cooperation between Iran and Syria is a message for future generations to understand the strategic dimensions of this strong relationship and not allowing foreigners and adventurers to interfere.”

Explaining about the latest development in the region including Syria, Mekdad described the continuous aggression of the Zionist regime against his country and the illegal military presence of the U.S. in Syria coupled with Washington’s sanctions on Damascus as a violation of the sovereignty and territorial integrity of that country and the main source of insecurity and economic pressure.

The Syrian foreign minister stressed the need for the United States to withdraw from the region, saying that Washington has no future in the region and must leave the Syrian territory.

In a report on Oct. 26, Al Jazeera reported that the United States will not be withdrawing its roughly 900 troops from northeast Syria any time soon, despite mounting speculation it would do so following its much-maligned August pullout from Afghanistan, according to officials with knowledge of the Biden administration’s plans.