[ Editor’s Note:  Is Smollett a Schmuck? The Chicago jury rammed a telephone pole up the minority grifter behind for what they ruled was a fake hate crime. He thought his hiring a couple of local brothers to stage a ‘homophobic attack’ would trigger the instant pity machine to bring an angel in to boost his lagging career.

After all, Smollett claimed to be gay, black, and Jewish, so who would dare risk challenging that three pack buzz saw? The jury was not intimidated with his con.

The prosecutor said the police department had to expend huge resources investigating the bogus hate crime charge. It also created more minority animosity in a city that has been busy with real social upheaval during the Trump era as ‘Divider-in-Chief’.

A city and a country with major problems on their hands had bigger things to deal with than getting hustled by a fired TV star trying to get back in public view by being a victim of anti-gay discrimination.

One would think he would be toxic now in the entertainment biz, but don’t be shocked to find him as the head organizer for ‘gay blacks for Trump’, as the orange terror knows how to make use of angry people with a chip on their shoulder.

Dear Mr. Smollett, just move on and get a job like everybody else is having to do and stop looking into the mirror getting depressed over how a handsome man is not rolling in money like he use to be. Others have cured themselves. “You can, too, but it’s up to you.” Free poetry from me… Jim W. Dean ] 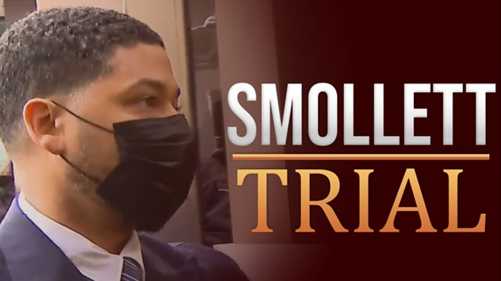 CHICAGO — Former “Empire” actor Jussie Smollett was convicted Thursday on charges he staged an anti-gay, racist attack on himself nearly three years ago and then lied to Chicago police about it.

In the courtroom as the verdict was read, Smollett stood and faced the jury, showing no visible reaction.

The jury found the 39-year-old guilty on five counts of disorderly conduct — one count for each separate time he was charged with lying to police in the days immediately after the alleged attack. He was acquitted on a sixth count, of lying to a detective in mid-February, weeks after Smollett said he was attacked.

The charge is a class 4 felony that carries a prison sentence of up to three years, but experts have said if convicted, Smollett would likely be placed on probation and ordered to perform community service.

The damage to his personal and professional life may be more severe. Smollett lost his role on the TV program “Empire” after prosecutors said the alleged attack was a hoax, and he told jurors earlier this week that “I’ve lost my livelihood.”

…In closing arguments on Wednesday, a prosecutor told jurors there was “overwhelming evidence” that Smollett staged the attack, then lied to police about it for publicity. His defense attorney said prosecutors’ case was based on lies.