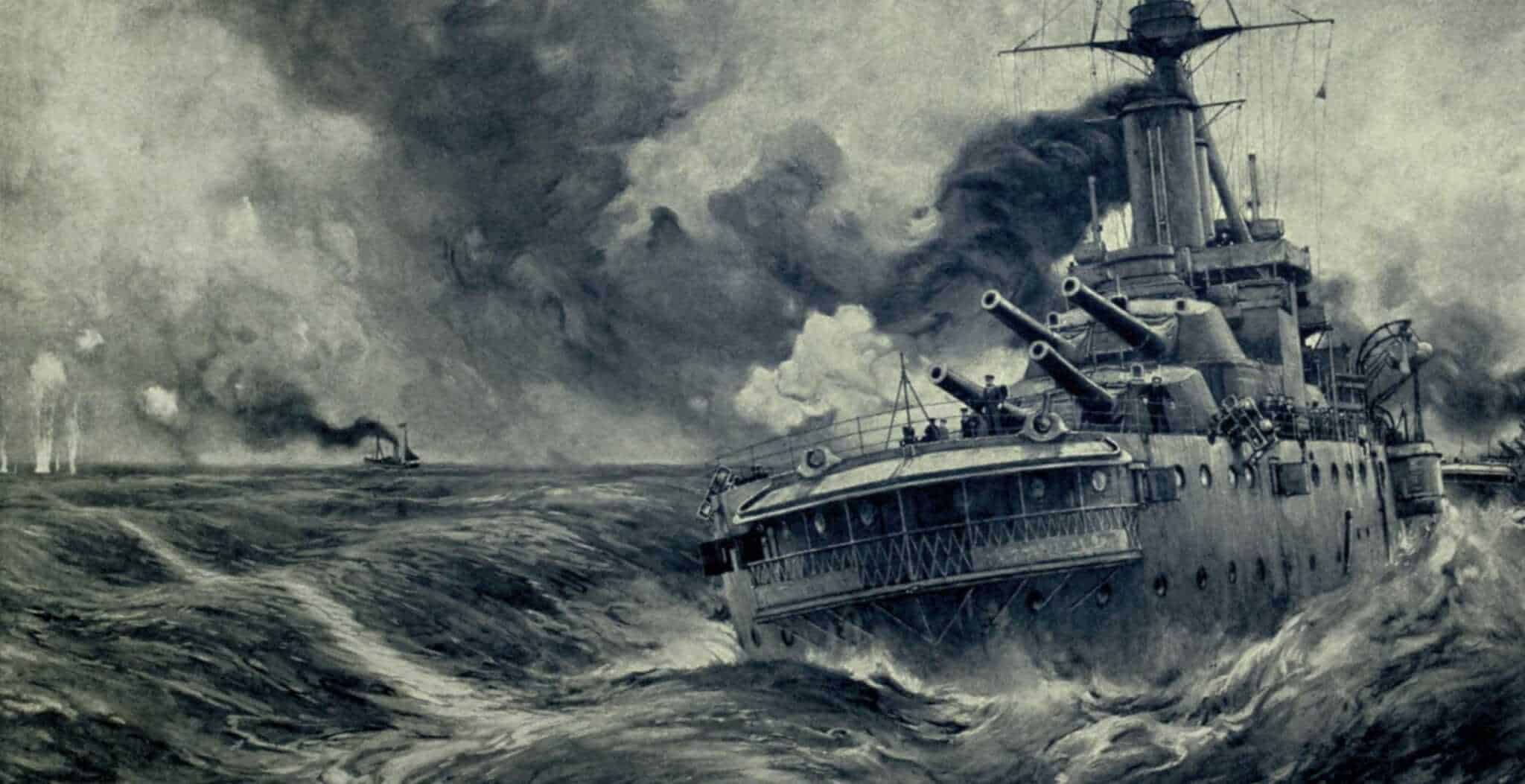 JEA: Woodrow Wilson was arguably a warmonger. Arthur S. Link, “a guardian of Wilson’s reputation,” admitted that Wilson laid “the foundation of a new world order.”[1]

Observers agree that Wilson “contributed to the rise of some of the most murderous dictators who ever lived. No U.S. president has had a hand—however unintentional—in so much destruction. Wilson surely ranks as the worst president in American history.”[2]

What was Wilson’s crime? He actually “joined the side that placed a lower value on human life.”[3] He sent America to the people who wanted to reduce Germany to rubble. He dragged America into World War I and, as a result, many Americans got juiced by the powers that be, most specifically the Allies.

This eventually created ideological chaos across the political spectrum in the United States and abroad, and World War I, as we all know, set the groundwork for World War II. Vladimir Lenin himself admitted: “Our revolution was born of the war.”[4]

“By the fall of 1917 the Russian army collapsed, and there wasn’t anything left to defend the Provisional Government.”[5] One observer, who refers to World War I as “a senseless bloodbath,”[6] argues,

“We wouldn’t have had Stalin without Lenin, and Lenin probably would have been a forgotten man if Woodrow Wilson hadn’t pressured and bribed the Provisional Government to stay in World War I.”[7]

The perennial question is this: Who was really playing with the political remote control? Listen to Wilson here:

“They know that there is a power somewhere so organized, so subtle, so watchful, so interlocked, so complete, so pervasive, that they had better not speak above their breath when they speak in condemnation of it.”[8]

Whether he liked it or not, Wilson, like George W. Bush and others, was obviously being used like a puppet in an ideological experiment. And here Wilson perceived that The Power That Be always end up ruling the majority. So, who was ruling Wilson? Who was he working for?

Wilson was basically working for Paul Warburg and Jacob Schiff. Schiff in particular always looked for fresh blood and always wanted to ignite wars. He was the wealthiest Jewish banker in the world at the time and hated the Tsarist government. He called Russia “the enemy of all mankind,”[9] and even financed plots against Russia.

Schiff “was hostile to Russia until 1917. According to the Jewish Encyclopedia, Schiff ‘belonged to the most important creditors of both his own and many foreign governments, part of which was the 200 million dollars which he lent to Japan during the Russo-Japanese war in 1904-5.’”[10] Schiff also financially supported both Trotsky and Lenin and financed subversive movements in Russia.

WORLD WAR I broke out in the summer of 1914. Within two years Germany had won the war.

The German submarines, which were a surprise to the world, had swept all the British convoys from the Atlantic Ocean and leaving Britain without ammunition and food for her soldiers.

At that time the French army had mutinied. They lost 600,000 of the flower of French youth in the defense of Verdun on the Somme. The Russian army was defecting. And the Italian army had collapsed.

Not a shot had been fired on German soil yet Germany was offering England peace terms. They offered England a negotiated peace on what the lawyers call a status quo ante basis which means: “Let’s call the war off and let everything be as it was before the war started.”

England, in the summer of 1916, was considering Germany’s peace terms. They had no choice. It was either accepting this negotiated peace that Germany was offering them or going on with the war and being totally defeated.

While that was going on, the Zionists in Germany, led by the Jew, Chaim Weitzman, who later became the 1st President of Israel, went to the British War Cabinet and said: “Don’t capitulate to Germany. You can win this war if the United States comes in as your ally. We can arrange this. But in return, you must promise us Palestine once the tide turns in your favor.”

THE ZIONIST JEW CHAIM WEITZMAN was a Russian born chemist who moved to England in 1904. By 1915, Weitzman had developed a chemical process of producing acetone from maize. Acetone was a vital ingredient in production of artillery shells which Britain and her allies had a short supply of in the beginning of World War I.

It was during this period that Weitzman, through the mediation of Walter Rothschild, met Sir Arthur James Balfour, the First Lord of the Admiralty, and David Lloyd George, Britain’s Minister of Munitions.

Both of these political figures were under the influence of the Rothschild banking dynasty, of which the Zionist Jew, Walter Rothschild, was the head. It did not hurt Weitzman’s goals when in 1916 Lloyd George became the British Prime Minister and Arthur Balfour the Foreign Secretary.

During this time period in America, President Woodrow Wilson was campaigning for his re-election in 1916 on his popular campaign slogan, “He Kept Us out of War.” But on April 2, 1917, President Wilson addressed both houses of Congress and pleaded with them to declare war against Germany. What made Wilson change his mind?

SHORTLY BEFORE PRESIDENT WILSON’S RE-ELECTION, he received a Jewish visitor in the White House by the name of Samuel Untermeyer.

The Firm had as one of its main clients, Kuhn Loeb Bank, of which Jacob Schiff, an agent of Walter Rothschild, was the head. Both Untermeyer and Schiff contributed generously to the National Democratic Committee that installed President Wilson in the White House in both of his elections.

Untermeyer informed President Wilson that he had been retained to bring a Breach of Promise action against President Wilson. Untermeyer’s client was the former wife of a professor at Princeton University at the same time that Wilson was a professor at Princeton University. Untermeyer informed Wilson that his client was willing to accept $40,000 in lieu of commencing the Breach of Promise action.

Untermeyer produced a packet of letters from his pocket written by President Wilson to his colleague’s wife when they were neighbors at Princeton University. These letters established the fact that an illicit relationship had existed between Wilson and the wife of his Princeton colleague. Wilson immediately acknowledged his authorship of the letters. Untermeyer then informed Wilson that his former sweetheart was in dire need of $40,000.

President Wilson informed Untermeyer that he did not have the $40,000 to pay his blackmailer. Untermeyer then volunteered to give Wilson’s former sweetheart the $40,000 out of his own pocket – but on one condition: that President Wilson promise to appoint to the first vacancy on the United States Supreme Court, the Zionist and Talmudic Jew, Louis Dembitz Brandeis.

Many were surprised that Wilson, the son of a Christian minister, would appoint to the highest court in the land the first Jewish Supreme Court Justice in US history.

Justice Brandeis, through the advice of his Zionist colleague, Rabbi Stephen Wise, volunteered his opinion to President Wilson that the sinking of the S.S. Sussex by a German submarine in the English channel with the loss of lives of US citizens justified a US Declaration of War against Germany.

Relying to a great extent upon the legal opinion of Justice Brandeis, (as well as fear of what Brandeis knew of Wilson’s illicit affair), President Wilson appealed to Congress to declare war against Germany.

This Congress did, on April 6, 1917. The Declaration of War against Germany by the United States guaranteed the Jews throughout the world that Palestine would be turned over to them upon the defeat of Germany even though Britain had already promised it to Trans-Jordan upon the defeat of the Ottoman Empire.

Indeed, Congress declared war against Germany because of Wilson’s assertion that Germany had sunk the S.S. Sussex and that US citizens aboard had perished with the ship. But after General Pershing’s troops were fighting in Europe, the hoax was exposed. The S.S. Sussex had not been sunk and no citizens of the US had lost their lives.

But now the United States was officially at war in Europe. In this war, 115,516 American soldiers were killed and 202,002 were maimed for life.

That is what the Anti-Christian Jews of the world conspired to achieve in their crooked diplomatic underworld.