[ Editor’s Note: Once again we have an ongoing international agreement scandal going on in plain sight with most interested parties pretending they don’t see anything out of line. The taxpayers are getting screwed was these officials get paid comfortable livings for duties which they do not honor.

Why? Well, the main reason is they look around and don’t see anyone else honoring them, hence they don’t want to be ‘the chump’ the is too stupid to see what is going on and get on the Santa Claus train of ‘take the money and keep your mouth shut’ option.

Next comes international media, an institution just shredded of any credibilility, preyed upon by vultures of every sort. This eventually evolved into the new and improved version of ‘just buy the mother upper’s and use the in any manner you want’.

Long time VT readers are well aware of the blockbuster security stories we have broken where no one in military or civilian authority, politics, academia, and certainly no one in the veteran or patriotic orgs has ever called wanting to learn more.

But we keep scratching the scab by republishing the ‘dirty dozen’ one in bits and pieces to remind ‘them’ that we are still here despite all the bans and blocks, and we still have a lot more to release when the time is right where it can have some effect, as in if someone really makes an effort to take us out.

We have one that should be published soon. To this end we are really trying to stay healthy as when we are no longer around we do not have a line of aspirants waiting to take over. The renumeration is not attractive and the risks are constant, but it sure is a lot of fun tormenting the bastards whenever we can… Jim W. Dean ] 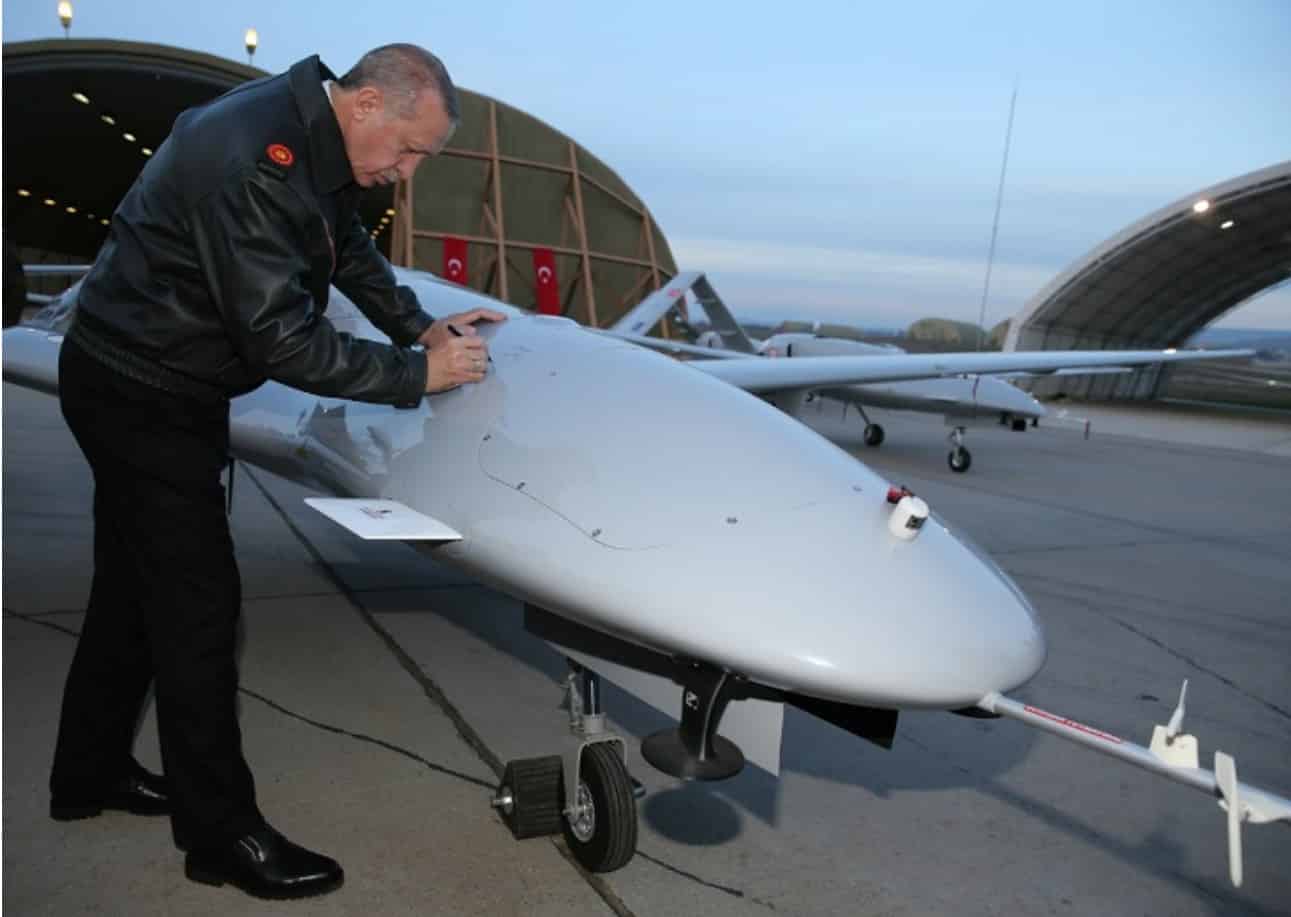 On December 3, Turkish President Recep Tayyip Erdoğan called Russian President Vladimir Putin. The heads of the two states spoke about Libya, Ukraine, and what is happening in Transcaucasia.

While discussing the Ukrainian conflict, the Russian President stressed the importance of full and strict compliance with the Implementation of the 2015 Minsk Package of Measures and other agreements, including in the Normandy format, according to the Presidential Executive Office website.

The Russian leader said that any attempts by Kyiv to use force in Donbas and to continue its destructive line aimed at disrupting the Minsk agreements were unacceptable. In particular, this is evidenced by the provocative activity of the Ukrainian armed forces in the conflict zone, including the use of Turkish Bayraktar unmanned combat aerial vehicles.

The Russian side made these comments because the additional ceasefire monitoring measures agreed by the participants in the Contact Group for the settlement of the situation in eastern Ukraine have been in force in the territory of Donbas since July 27, 2020. As a result, there is a ban on offensive and commando-type reconnaissance activities, aircraft use, and other actions.

The armed conflict in the southeast of Ukraine began in 2014 between the citizens of Ukraine, when the residents of Donbas refused to recognize Kyiv’s new government after the coup d’état in February 2014. In 2015, the Normandy Quartet leaders agreed on measures to implement the Minsk agreements of September 19, 2014. Ukraine passed a law on the special status of Donbas in 2014, but it never came into force.

Reacting to the claims made by Moscow, the Turkish press again made a rather clumsy attempt to shift responsibility to Kyiv. It claimed that Turkey could not be responsible for using drones because they became Ukrainian, not Turkish, after being sold. In this regard, Ankara began to strenuously stress that the Turkish side allegedly did not violate anything in this sale, as there were no bans on its arms supplies.

Ankara is blatantly disingenuous, forgetting the International Code of Conduct for Arms Transfers, including those to armed conflict zones, which was approved by a majority vote (154 out of 193 UN member states) at the UN General Assembly on April 2, 2013, for which Turkey voted.

It should be reminded that on October 26, it became known that the Ukrainian army used the Bayraktar TB2, a Turkish unmanned combat aerial vehicle for military purposes in Donbas.

The General Staff of the Armed Forces of Ukraine confirmed this, which was reported on Facebook by the General Staff Press Service. According to the statement, Lieutenant-General Valeriy Zaluzhnyy, Commander-in-Chief of the Ukrainian Armed Forces, gave the corresponding order.

For the first time in the area of the United Forces operation, the Bayraktar reconnaissance drone system was used in combat. According to the press center, a Bayraktar with a guided bomb destroyed one cannon of the military near the settlement of Hranitne in Donbas.

It is well known that the Bayraktar UAV contract was signed between Ukraine and Turkey in 2018. At the same time, the contract included only six drones and three control stations. The contract amounted to $69 million. The Bayraktar TB2 is a Turkish unmanned combat aerial vehicle with a range of 150 km and a cruising speed of 130 km/h.

Amid Vladimir Putin’s telephone conversation with Recep Tayyip Erdogan on December 3, there was a discussion between the two leaders on ways to resolve the armed conflict in Donbas. The American publication Bloomberg, referring to sources in government agencies in Ankara, reported that Turkey had sold Ukraine many more Bayraktar TB2 drones than previously stated. New supplies are also possible in the future.

According to them, Kyiv has purchased “dozens” of drones, missiles, and control stations from the Turkish side since 2019. According to newspaper sources, Ukraine has ordered several dozen more drones from Ankara, which are now under development and are being delivered.

In turn, representatives of the defense company and the Turkish government officials refused to comment on the number of Bayraktar TB2 UAVs sold to Ukraine. At the same time, according to reports by several media, including the Swedish Nordic Monitor website, Turkey is actively training Ukrainian soldiers, including in the use of Bayraktar UAVs, which, in particular, takes place near the frontline in Donbas. Initially, such training was provided only for Ukrainian special forces personnel, but now training is also offered to members of other troops.

In early November, Serhiy Shaptala, Chief of the General Staff of the Armed Forces of Ukraine, also said on the Ukrainian 1+1 TV channel that Kyiv would increase the number of Bayraktar drones in the Ukrainian army in cooperation with Ankara.

At the same time the Ukrainian media stresses that military cooperation between the two countries has been increasing significantly in recent years, not only in the field of drones. It is pointed out that during the last 4-5 years, the number of agreements and contracts between Ukraine and Turkey has multiplied, $1 billion being defense contracts signed over the previous 3-4 years.

At the same time, sensing Ankara’s readiness to actively stand up to Kyiv in the resolution of the conflict in Donbas, including by deepening the military cooperation between Ukraine and Turkey, the Kyiv political elite has already emphasized on public calls to transfer the Minsk format to Istanbul or Ankara.

The above clearly demonstrates the frankly duplicitous behavior of Erdoğan, who expresses his readiness to participate in settlement of the conflict in Donbas in a personal conversation with the Russian President, while on the other hand, continuing to strengthen the armed confrontation between Ukrainians, secretly pumping Ukraine with his Trojan horses, which are various military weapons and drones.

However, another Erdogan Trojan horse for Ukraine is the Turkish Stream, which has recently been actively developing, causing more and more competitive damage to Kyiv. Turkish Stream has become a substitute for gas supplies to the Balkans and Turkey via Ukraine.

Thus, 23.2 billion cubic meters of gas was pumped through the Turkish Stream during the first 11 months of 2021 alone, for which Ukraine could have received $736 million.

But this did not happen. The reduction of gas pumping through Ukraine will continue in 2022, so Ukraine will lose more than $ 1 billion next year only because of the Turkish Stream.