Home World Italian and Russian Reporters MURDERED in Donbass: No One Guilty! 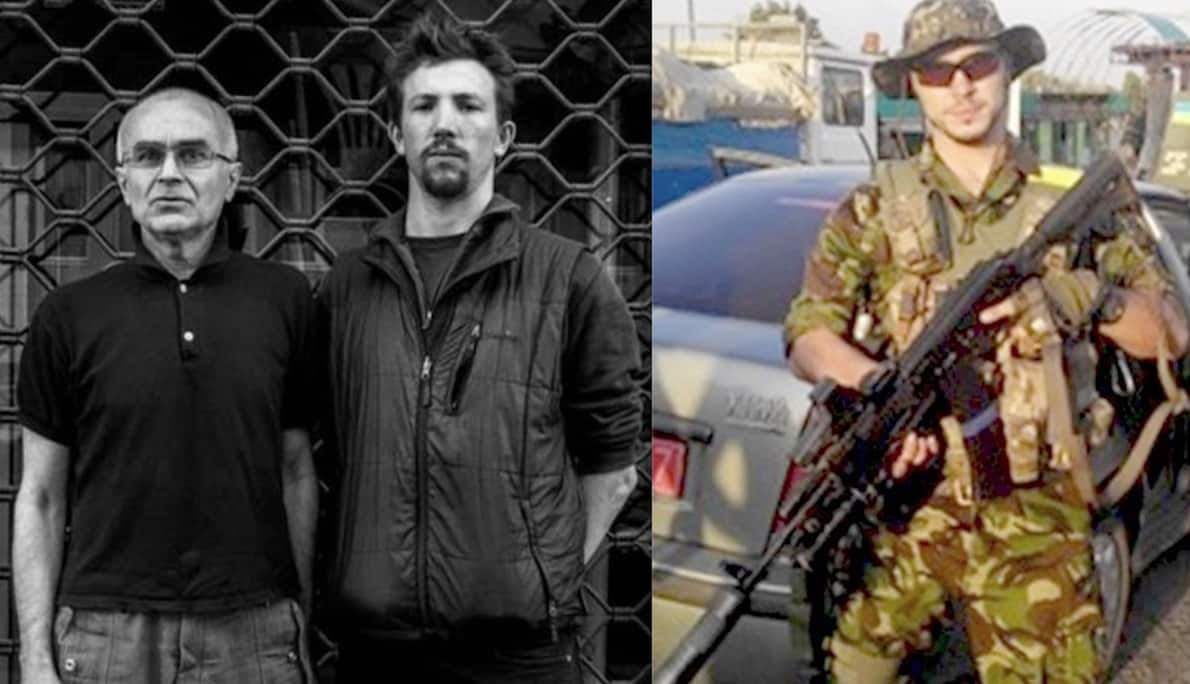 On the cover image the reporters Mironov and Rocchelli, beside to NGU Warrior Markiv

In the end, the line of “Europa +”, the party of Emma Bonino financed by George Soros, which had officially asked for the acquittal of the dangerous paramilitary of the Ukrainian National Guard, won.

In latest days, the Italian Supreme Court of Cassation confirmed the acquittal for Vitaly Markiv, accused of the murder of Andy Rocchelli, the Pavia photojournalist killed in Donbass on 24 May 2014, killed in a “mortar shooting” together with the Russian interpreter and photographer Andrei Mironov, while a Frenchman had survived by a miracle.

Markiv, a soldier of the Ukrainian National Guard with an Italian passport, was sentenced in 2019 to 24 years in prison by the Court of Assizes of Pavia and subsequently acquitted, in November 2020, in the appeal process.

Despite a mountain of evidence collected scrupulously by the Pavia prosecutor Giorgio Reposo and his collaborators and an unequivocal first degree sentence on the decision, political pressures weighed in the scorching climate of a Donbass civil war triggered by the bloody coup in Midian square in Kiev where some Mercenary snipers fired on demonstrators, killing over 100 people including 20 policemen and soldiers.

”Target Shooting to Italian and Russian Reporters in Donbass”. But NGU Warrior Acquitted of Murder as asked by Kiev & Soros-puppets

Soros, along with various Western embassies, also financed the revolt (already attempted with the Orange Revolution of 2004) through the media, including a Muslim reporter who arrived from Afghanistan who later became deputy director of the national war industry.

The coup forced pro-Russian president Viktor Yanukovych to flee and brought Soros-funded and NATO-backed politicians such as Arsenij Jacenjuk and Arsan Avakov to power, arrested a few years earlier in Italy for alleged corruption.

Avakov himself returned to Italy to attend all the trials in Markiv, a prominent member of the NGU (Ukrainian National Guard), where various groups of voluntary militias from the Pravyj Sector (Right Sector) but also the infamous neo-Nazi ultra-right Azov Battalion converged, accused by Amnesty International of torture.

Alongside the NGU, the former Chechen ISIS Foreign Terrorist Fighters returned to Ukraine from Syria also fought in the interminable conflict against the pro-Russian independence republics of Donetsk and Lugansk.

In this fiery climate of the cold war between NATO countries and Russia, which flows right on the borders of Ukraine, a small judicial error was enough to acquit the paramilitary sentenced in the first instance.

The Supreme Court rejected the appeals filed against the acquittal and in fact confirmed the appeal sentence. The Attorney General had asked for Vitaly Markiv’s acquittal to be annulled, urging a new appeal process.

One year ago, the Milan Court of Appeal in the reasons for the sentence highlighted a lack of evidence due to a formal error: the statements made by the military and Markiv’s superiors had been collected without the possibility, which was due to them, not to answer the questions. “So the test must be canceled.”

“The reconstruction of the facts – reads the sentence – as it emerges from the procedurally usable evidence and from the considerations made in the preceding paragraphs, leads this Court to agree with the conclusions of the Court of Assizes of Pavia regarding the origin of the blows that have Rocchelli killed and Roguelon wounded, that is mortar shots fired from the Karachun hill by the Ukrainian army, where the photojournalists, the taxi driver and the civilian were hidden […] they were therefore there to carry out their activity as photojournalist [ …] The attack took place without any provocation and offensive either on their part or the pro-Russians “.

War Propaganda in ME and Eastern Europe: Israel Stockpiling Weapons for possible attack on Iran. US delivers rockets to Ukraine

The Milan Court of Appeal also finds that, correctly, the “Ukrainian state was sued as civilly liable”. A passage, the Rocchelli say, “that we consider extraordinary: it means that the immunity provided for states does not apply in the case of violation of human rights and crimes against humanity. On the eyewitness, the French William Roguelon, who had miraculously escaped the attack, the Court considers him “fully reliable”.

The defense hears with satisfaction the ruling of the Supreme Court of Cassation: “A process that should not have started” – “It is a great victory in a process that should never have started”, commented the lawyer Raffaele Della Valle, lawyer of Vitaly Markiv. “I’m excited, we got out of a nightmare. Markiv is a free citizen, who has already returned to Ukraine, and he will be able to continue his military career ”. The lawyer specified that the Supreme Court declared the appeals “inadmissible” against the acquittal.

Every year Italian politicians and journalists are indignant at the death of their colleagues in the so-called rogue states where dictatorial regimes govern. Now they can also be indignant against Roman justice …