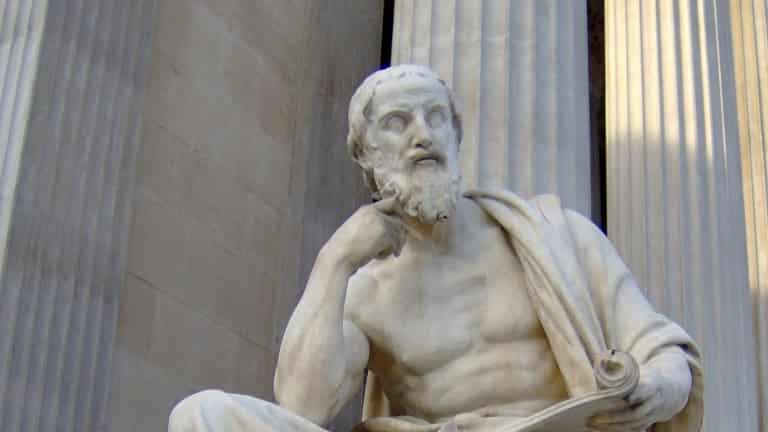 A reader (I will call him Johnny for privacy) contacted me and asked, “Why neither you, nor indeed anyone else at VT, has yet ventured to report the writings of Herodotus?” Johnny went on to say: “Attacking the Protocols has been a popular bleed-valve for years, and can be called ‘controlled opposition’, but Herodotus is a bit more real. Anyone got the cojones for that?”

I was completely bewildered, since Johnny never focused on specific issues in his first email. I responded by saying:

The writings of Herodotus are pretty vast. So what are you referring to? You should also know that Herodotus, though he has been described as “the father of history,” has also been criticized for his inclusion of “legends and fanciful accounts” in his work. Thucidides himself accused him of making things up.

Then Johnny sent me the following of Herodotus:

[3.91] The country reaching from the city of Posideium (built by Amphilochus, son of Amphiaraus, on the confines of Syria and Cilicia) to the borders of Egypt, excluding therefrom a district which belonged to Arabia and was free from tax, paid a tribute of three hundred and fifty talents. All Phoenicia, Palestine, Syria, and Cyprus, were herein contained. This was the fifth satrapy.

I again was confused because I didn’t get the point he was trying to make. I responded by saying: “So, what do you want me to do with this? Publish it? If so, what does that have to do with anything?”

In the same email, Johnny said: “The geography of Herodotus has been attacked less often than his historical accounts. There is no notice of Israel.”

Now we’re talking. My response was pretty succinct: “So, if Herodotus doesn’t mention Israel, then what’s the conclusion that you’re trying to make? Israel didn’t exist? Is that a thought that you should even entertain?”

Instead of addressing this very issue, Johnny illogically declared: “Sorry to bother you.  You are obviously not the man I thought you were.  Israel is a coinage of the late 1940s, almost two and a half thousand years later.”

I quickly responded again by saying:

Obviously you have not been aware of the historical research and archaeological digs that have been going on since the past decades. I would highly encourage you to pick up a copy of James K. Hoffmeir’s Israel in Egypt: The Evidence of the Authenticity of the Exodus Tradition (Oxford: Oxford University Press, 1999). And you are still not answering the question that I asked earlier. So if Israel isn’t mentioned by Herodotus, therefore it didn’t exist? Are you really serious?

For Johnny, Herodotus seems to be the alpha and omega, the beginning and the end. If he doesn’t mention Israel, then Israel never existed. Imagine if we use that logic in any historical event. In her almost 900-page tome The History of the Ancient World: From the Earliest Accounts to the Fall of Rome, Susan Wise Bauer never mentions people like Democritus, therefore they never existed! How absurd can we get?

Once again, Johnny did not want to answer the serious question. He declared: “Sophist entrapment question. Infra dig. ‘Have you stopped beating your wife?’ The 1940s’ coinage for a new geographical territory squatting in Northern Palestine, largely thanks to Balfour and his Zionist handler, does indeed tip the hat to the Egyptian ‘Ra’, along with ‘Isa’ (father) and ‘El'(god), recorded in the OT as a personal name change for Jacob, was it not?”

I was on the brink of throwing in the towel. I said:

“It is pretty obvious that by avoiding to answer serious questions–and I was not trying to put you in a corner, since this is a historical question–you want to believe what you want to believe with respect to Israel or anything related to this issue. That is perfectly fine, but please do not bother people to be engaged in a discussion when you are not willing to even consider historical studies.”

Johnny: “Projection delusion again. Herodotus has a decent claim to be a student of his times, now able to be called “historical.” No counter-balance to your Egypto-Canadian (Is he Jewish by any chance?) from the Copenhagen Group?”

You see what’s going on? Johnny didn’t want to even consider the historical study that I sent him. He would rather use ad hominem attacks and red herrings because they are apparently easier than presenting serious evidence.

I told Johnny that I was planning to publish our interaction at VT. He responded again:

“Breaching privacy without my consent? Is that not betraying a journalistic source? A proper editor would not do such a thing.  I am not concealed abroad. Not a good look for VT’ reputation. That would only help if you included the 180 degree correction, a polar reversal, in any report, but at the moment you are threatening a breach of confidence to a source and you do not have my consent.  I value my privacy and that of my family, and the security of my residence, which has previously been the subject of an arson attack at 2am. Ever enjoyed one of those?”

I responded: “I am not breaching any privacy whatsoever. You decide to email me about these issues and to engage in this dialogue. This is not a matter of private conversation, since this is a historical subject. I will not mention your name, but the discussion will be mentioned with proper quotations from both you and me.”

If Johnny still thinks that this is a private issue, then he ought to read the email conversation between Daniel Dennett and Michael Ruse. Johnny responded to the article by saying:

“The Alexis item you have just published is a gross breach of confidentiality and thus trust.  As I suspected, it has been edited in his favour.  Unprincipled and historically ignorant scumbag.  Bleed-valve for the Zionazis? That is all you will ever hear from me by way of any contributions.  Herodotus is not the only person not to notice the invisible Israel).”

I responded: “I challenge you to show where the article ‘has been edited in [my] favour.’ Keep in mind that I have all the email correspondence you have been sending me. If I misquote or miscite you in any way, please show where the misrepresentation lies.”

Once in a while I would encounter people like that, and I usually ignore them. But the entire discussion has been a complete shock to me–one of the worst discussions I have ever had.