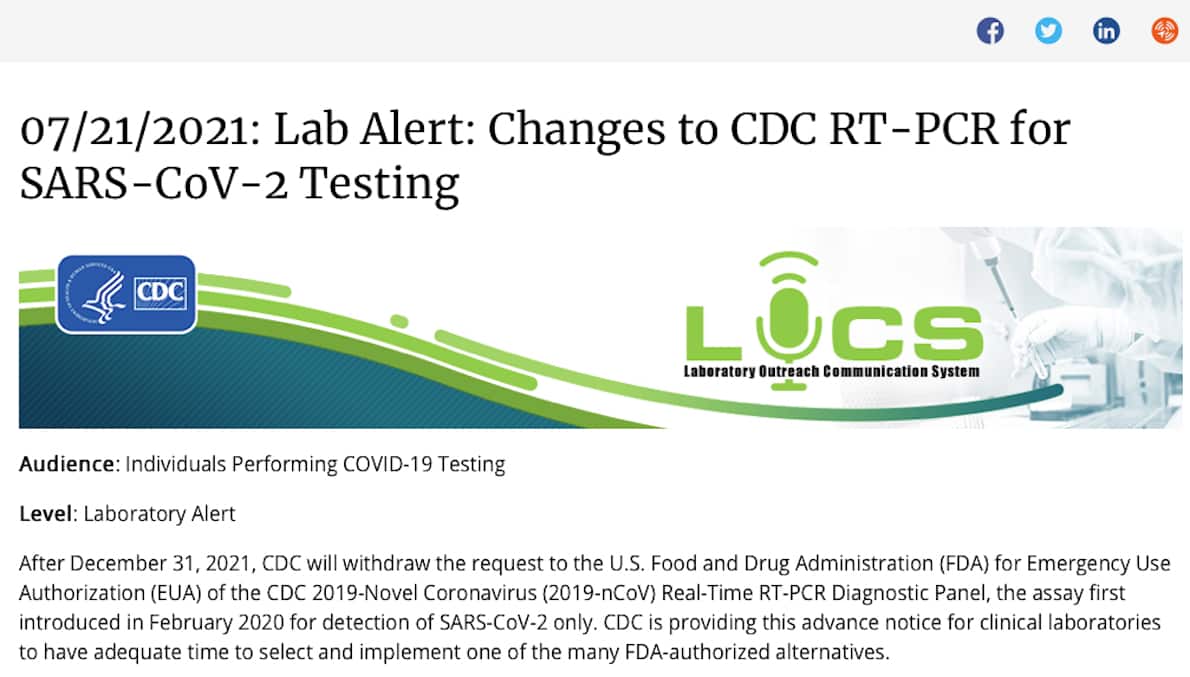 On 21 July 2021, a palindrome date and therefore lucky, the 18 lines that rewrite the history of the Covid-19 pandemic were published. The CDC (Centers for Disease Control and Prevention) of the USA, the highest health authority of the American government for monitoring diseases and in particular infectious ones, has launched an alert that assumes the range of a nuclear missile against the rubber wall of the international narrative on the emergency caused by the SARS-Cov-2 virus (believed to have been built in the laboratory by many scientific researches now).

«After December 31, 2021, CDC will withdraw the request to the U.S. Food and Drug Administration (FDA) for Emergency Use Authorization (EUA) of the CDC 2019-Novel Coronavirus (2019-nCoV) Real-Time RT-PCR Diagnostic Panel, the assay first introduced in February 2020 for detection of SARS-CoV-2 only. CDC is providing this advance notice for clinical laboratories to have adequate time to select and implement one of the many FDA-authorized alternatives».

This is the “Lab Alert” launched by the Division of Laboratory System (DLS), the specialized section of the CDC (link at the bottom of the article). On its own it would already be enough to confirm all the investigations carried out in recent months on 97% unreliable tampons, as claimed by various scientific researches and international judicial authorities.

But the official communication of the CDC (branched body in all confederate states) states between the lines something already shocking, anticipated by Gospa News already last year: that is the risk that the nasopharyngeal swabs PCR, subject to cycles of variable amplifications, may not distinguish Covid-19 from a simple flu.

«Visit the FDA website for a list of authorized COVID-19 diagnostic methods. For a summary of the performance of FDA-authorized molecular methods with an FDA reference panel, visit this page – added CDC –  In preparation for this change, CDC recommends clinical laboratories and testing sites that have been using the CDC 2019-nCoV RT-PCR assay select and begin their transition to another FDA-authorized COVID-19 test. CDC encourages laboratories to consider adoption of a multiplexed method that can facilitate detection and differentiation of SARS-CoV-2 and influenza viruses. Such assays can facilitate continued testing for both influenza and SARS-CoV-2 and can save both time and resources as we head into influenza season. Laboratories and testing sites should validate and verify their selected assay within their facility before beginning clinical testing».

Real time PCR – also known as Quantitative PCR, abbreviated qPCR – is a method that simultaneously amplifies (polymerase chain reaction or PCR) and quantifies DNA, similar but not to be confused with the RT-PCR (Reverse Transcriptase -PCR) method . DNA is amplified by DNA-polymerase chain reactions. After each round of amplification, the DNA is quantified. Common methods of quantification include the use of fluorescent stains that intercalate with double-stranded (ds) DNA and modified DNA oligonucleotides (called probes) which are fluorescent when hybridized with a DNA. Real-time PCR is often combined with Retro Transcriptional PCR (RT-PCR) to quantify the expression levels of specific RNA: retro-transcription (or reverse transcription) produces single-stranded complementary DNA called cDNA (complementary DNA) keeping the relative concentration ratios of the different RNA species unchanged. In this way it is possible, for example, to measure the relative expression of a gene at a particular time, either in a cell or in a particular type of tissue. The combination of these two techniques is often referred to as quantitative RT-PCR.

For the first time in the history of a pandemic, a government health authority admits what is already suspected by many investigative experts and journalists and reported by Gospa News. We were in fact the first to report an article from Russia Today which, thanks to a reporter with scientific specializations, reported the anomaly and this alleged risk of confusion between Covid-19 and normal flu.

A hypothesis indirectly confirmed also by one of the leading Italian researchers, the professed Francesco Vaia, Director of the National Institute of Infectious Diseases Lazzaro Spallanzani in Rome. He was the first to admit that they were waiting for diagnostic tests capable of distinguishing the SARS-Cov-2 virus from the so-called common cold, as also reported by our webmedia.

Dr. Vaia himself has recently partly diminished the alarm for the Delta variant of Covid-19, confirming, as shown by very low hospitalizations and intensive care (about 2% in Italy), that it is very contagious but has a “symptomatology very low “. While the Epsilon variant, identified in California, has shown incredible resistance to vaccines so as to corroborate the theses of those scientists who believe it is caused precisely by anti-Covid serums as it is considered dangerous to “vaccinate during a pandemic”, as reported by the biologist Franco Trinca who, citing eminent international virologists, defined it as a practice similar to “a weapon of mass destruction”. Contradictions that confirm that the SARS-Cov-2 virus exists and can also be very dangerous.

The sensational communication of the CDC is destined to have great repercussions all over the world because in fact it helps to certify that there is no certainty of how many people were really infected by Covid-19 and how many false positives, even if in reality this it is not new.

Already Professor Giorgio Palù, academic virologist in Italy and in the USA, when he openly sided against the possibility of new lockdowns in October 2020 (before being called by the Conte government to lead the Italian Medicines Agency – AIFA) on the basis of two elements: the effective therapies identified by the doctors (but largely ignored by the Ministry of Health) and the uncertainty of the outcome of the PCR swabs variable according to fewer or greater cycles of amplification, capable of detecting the presence of any bacterium.

After the alert launched by the CDC, the pandemic scenario from 2020 onwards changes diametrically, especially in Italy, where the Conte and Draghi governments have both been supported by the Democratic Party which has had multiple intrigues with the vaccine giants since the secretariat of Matteo Renzi in compliance with the global immunization plan wanted by Barack Obama and Bill Gates. In this gloomy picture, the legal actions taken by the magistrate Angelo Giorgianni take on even more importance, who made a complaint to the International Criminal Court of The Hague deeming the lockdown crimes “against humanity”. But also the complaints filed by the biologist Franco Trinca and by the lawyer Alessandro Fusillo and by the consumer leader Marco Tiberti for state massacre.

If in fact the unreliability of PCR swabs, used as the main method of monitoring infections from the SARS-Cov-2 virus, has made any closure and restriction of freedom uncertain both in Italy and in many other countries of the European Union. On the other hand, the risk of confusion between Covid-19 and influenza has made the guidelines of the Ministry of Health on watchful waiting and paracetamol inadequate. Thus confirming the hypothesis, supported in the denunciation signed by Trinca, Fusillo and Tiberti, of a massacre among those who had actually contracted the dreaded virus. SARS-Cov-2, according to bio-engineer Pierre Bricage, was in fact built with the grafting of HIV sequences of different viral load which therefore make it little, medium or highly lethal.

Thinking that all this took place on the basis of the intrigues of Italian and American Democratic politicians with Big Pharma to sell vaccines outlines a chilling, inhuman, apocalyptic horizon but unfortunately increasingly confirmed by countless clues. Among which is now added the case of tampons certified as unreliable.

This latest news represents a gigantic sword of Damocles on the government line of Italian Prime Minister Mario Draghi who – like the American President Joseph Biden (funded by Pfizer), has “threatened” the risk of death for the unvaccinated – in order to justify the mandatory Green Pass in many contexts of social life adopted in recent days in Italy and French on the basis of a monitoring of Covid positives based in reality on fake tests!