Home World Hunt for No Vax. In Italy Policemen, Doctors in the Viewfinder. In... 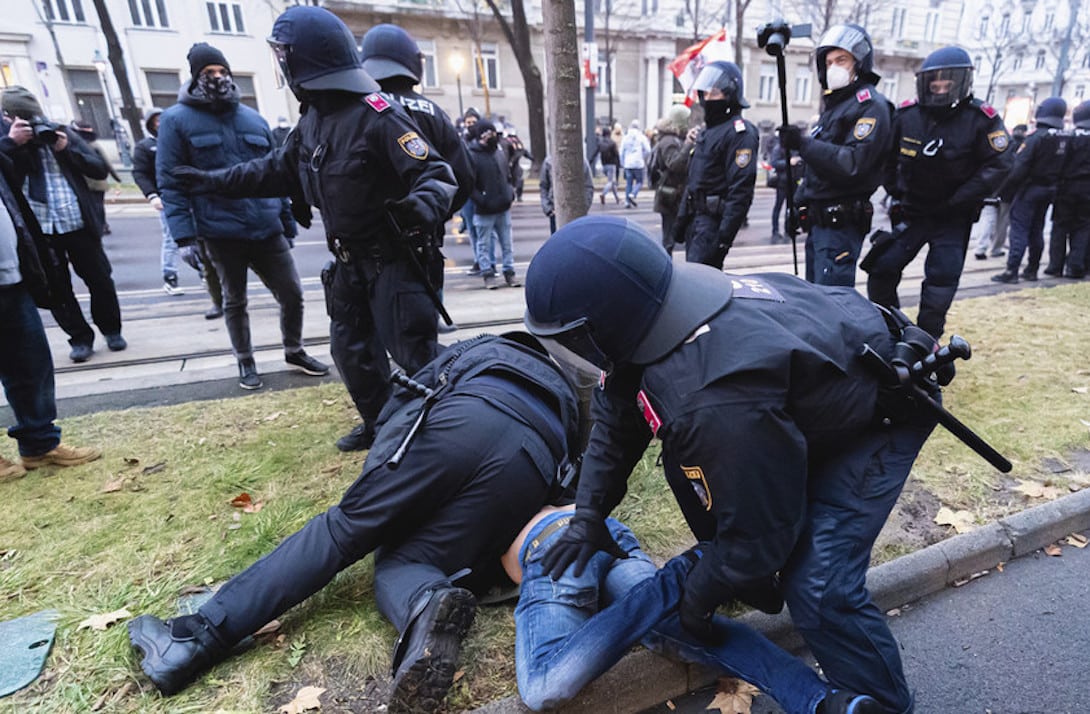 With a “goliardic note” in the sarcastic reference to the famous African proverb about the lion and the gazelle, an allegory of the law of the Savannah, Sergio Scalzo, national secretary of COSAP (Coordinamento Sindacale Belonging Police), signaled the beginning of the ” policeman hunt “.

Meanwhile, mainstream agencies and newspapers give great prominence to the blitzes of the Carabinieri of the NAS against the No Vax doctors who have continued to exercise ignoring the requirement for anti-Covid vaccination.

In Italy where the mafia, from the South to the North, dominates in districts that are difficult to access by the police themselves e illegal immigrants from Nigerian Clubs peddle, beat and rape whenever they get the chance, thanks to the government of Mario Draghi, law enforcement officers are primarily committed to repressing their colleagues or health workers who, by virtue of Article 32 of the Constitution, refuse to become guinea pigs of experimental gene sera.

“It would seem that many police officers who took ordinary leave were even chased by their own office colleagues even if they were dangerous offenders” adds Scalzo in his alarming letter.

But this even appears to be nothing compared to what is happening in a city in Austria where the authorities are recruiting “vigilantes” specifically to track down unvaccinated citizens when the mandatory vaccination for the entire population will start from 1 February, with fines very salty and even the risk of a few weeks in jail. Let’s see in detail the three different issues.

THE HUNTING OF COPS REPORTED BY COSAP

“Pursuant to the Decree-Law No. 172 of November 26, 2021, which introduced in the text of the Decree-Law April 1, 2021, No. 44, converted with amendments by Law May 28, 2021 No. 76, Article 4 -ter , from 15 cm, the vaccination obligation for the prevention of SAR VOC 2 infection has been extended to all personnel in the security, defense and public rescue sector »writes the general secretary of COSAP.

“In the circular” de qua “, we focus on the discipline concerning the verification of the fulfillment of the vaccination obligation, identifying between the managers of the structures, the staff appointed to ensure compliance with this obligation pursuant to paragraph 3 of Article 4-ter. In this regard, it is useful to underline the unfortunate and mortifying theater in which the policeman runs the risk of being the protagonist “adds the trade unionist Barefoot who previously reported “Psychological harassment” of agents to force them to vaccinate.

«Since 15 cm, numerous reports have come to this COSAP National Secretariat that outline a sort of“ policeman hunt ”; a multitude of colleagues would seem to have been subjected to forcing by others belonging to the same office / department. Someone even hints at the idea of ​​stalking, stalking and evening house raids, not to mention the numerous improper phone calls aimed at treading on the subject of vaccination. If the above were true, all this would be indecent and unacceptable! ».

Therefore, the police union invites the Chief of Police to remind the peripheral Offices “with courteous urgency, the adequate and calibrated use of the tools specifically provided for the notification of documents”.

THE BLITZ OF THE CARABINIERI IN MEDICAL STUDIES

From November to today, the Nas carabinieri have discovered 308 unvaccinated doctors and health workers irregularly at work. During the inspection services, the military monitored 6,600 positions.

135 doctors, dentists, pharmacists, nurses and other figures held responsible for abusive exercise of the profession for continuing to carry out their activities despite being subject to suspension measures were referred to the prosecutors. There were also closures and seizures of 6 medical and dental offices as well as 2 pharmacies, within which professionals already suspended were carrying out their activities.

During the investigative activity, the carabinieri also seized drugs and medical devices fraudulently used in the course of medical activities and practices by persons not entitled to their detention and use. The work of the Nas will continue with further control services on compliance with the various types of Green pass and compliance with vaccination obligations.

The operations that led to the identification of unvaccinated doctors and health workers at work concerned in particular Piedmont, Sicily, Trentino, Emilia-Romagna, Veneto and Campania.

The “raids” ended just as General Francsco Paolo Figliuolo, commissioner for the Covid emergency and for the vaccination campaign, was appointed commander of the Joint Operation Summit Command which places him above all the Maybe Armed, including the Carabinieri.

AUSTRIAN CITY RECRUITS THE VIGILANTES AGAINST THE NO VAX

A city in Austria is looking for employees who will be tasked with enforcing fines on those unwilling to get the anti-Covid injection. The recruitment campaign comes weeks before a large vaccine requirement in the European country, starting February 1, 2022.

Successful candidates will issue sanctions, review appeals and take measures against those who fail to pay the fine for not being vaccinated, says a job advertisement posted by the Austrian city of Linz. The opening line says the work will please those who “enjoy working with legislation and administrative procedures”.

The hard work of the employees will be paid monthly with a salary starting at € 2,774 ($ 3,126). To qualify for the job, an individual will need to have Austrian citizenship, be a secondary school graduate, be resilient and prepared to work overtime, have no criminal record, and last but not least, have a Covid vaccination or certificate of valid healing.

Additionally, women will have priority in competing for the spot against men with comparable qualifications.

“Cops Abducted Me to Held in a Covid Concentration Camps Against my Will”. Young Australian Girl Tells in a Disturbing Video

Linz, home to 200,000 residents, is known for having the lowest Covid vaccination rate in all of Austria. According to a website that monitors the issuance of digital vaccination certificates in the country, only 63% of the city’s population has so far received a full dosage of a Covid vaccine.

But since February 1st will become mandatory with fines of up to 7,200 euros and even the risk of a few weeks in prison for those who cannot pay them. For now the worst is recorded only in Australia where concentration camps have already been established for infected people and people who have come into contact with them.

City hiring People-Hunters to Pursue and Fine the Unvaxxed