[ Editor’s Note: The Proud Boys ‘free speech-First amendment’ defense ploy crashed and burned in Judge Kelley’s DC courtroom. It was not necessarily bad lawyering, because that was all their attorney had to throw up against the wall, hoping it would stick.

This sets the stage for who among the Proud Boys is going to get the best deal by flipping on the others, as historically there is not much left to give for those who hold out for a miracle that never comes, in this case getting a pardon from Trump someday. 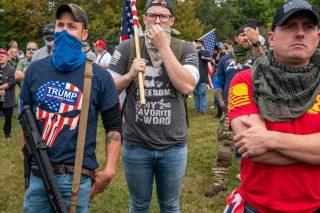 Anything is possible in this crazy world we live in, but I can’t see the judges letting the Trump disposable riot fodder make fools of them.

The prosecutors have to bring felony conspiracy and sedition charges to rack up the big sentences which will be an ice cold bucket of water on the ‘we can get away with anything by calling it political activity’ dream that the Trump Insurrections have been living in.

Once Trump’s accounts and assets all get frozen and seized, Israel or Saudi Arabia will be the only refuge for him if he can dodge his Secret Service detail, the same folks he gave Covid to 300 of them because did not want them seen wearing masks around him. I would have impeached him just for that, proof that I am just a meanie.

You can get a download of Judge Kelley’s 43 page opinion here, which I will be reading later today, to add to my pile of earlier lost ‘The Steal’ court rulings.

It’s been a long grueling year for us at VT, and fortunately the Trumpers, also, as they are learning that the great fixer they thought would be their great protector has legal and financial problems of his own to deal with… Jim W. Dean ]

A federal judge has refused to dismiss an indictment charging four alleged Proud Boys leaders with conspiracy and obstructing an official proceeding during the 6 January attack on the US Capitol – a development that could have potential implications for Donald Trump.

On Tuesday, the US district judge Timothy Kelly rejected arguments by defence lawyers…He said they had multiple nonviolent options to express their opinions about the 2020 presidential election, in which former president Trump lost to Joe Biden.

“Defendants are not, as they argue, charged with anything like burning flags, wearing black armbands, or participating in mere sit-ins or protests,” he wrote in a 43-page ruling. “Moreover, even if the charged conduct had some expressive aspect, it lost whatever first amendment protection it may have had.”

As reported by the Guardian last week, expectation is growing that Trump may face charges for trying to obstruct Congress from certifying Biden’s election.

…Federal prosecutors have so far cited the obstruction statute in about 200 cases involving rioters charged by the Department of Justice for their involvement in the attack, supported by recent rulings by Trump-appointed district court judges.