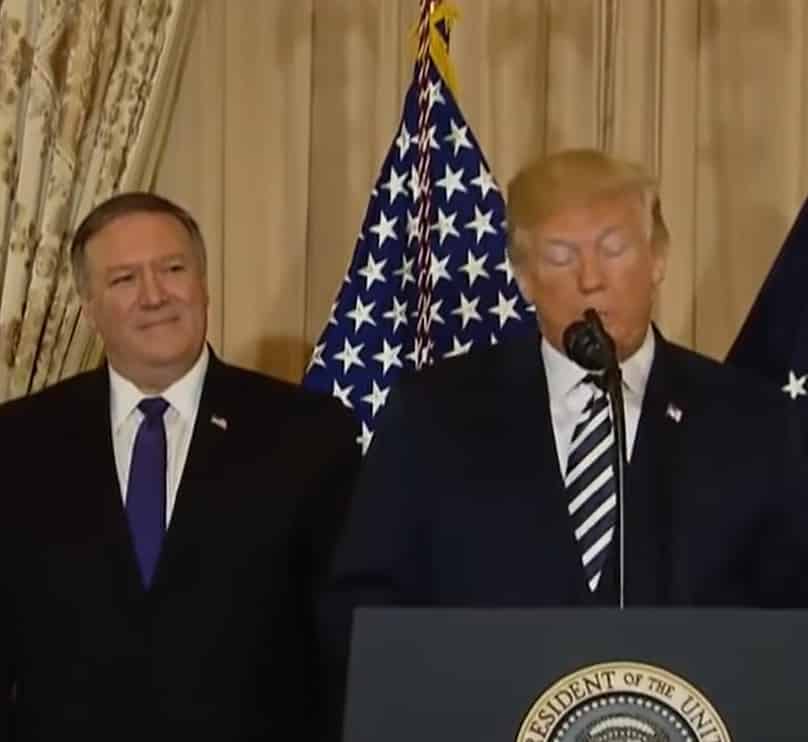 Raeisi made the remarks while addressing a gathering of thousands of mourners in the Iranian capital held to commemorate the second anniversary of the US assassination of the former commander of the Islamic Revolution Guards Corps (IRGC)’s Quds Force, deputy commander of Iraq’s Popular Mobilization Units (PMU) Abu Mahdi al-Muhandis, and their companions outside Baghdad International Airport in January 2020.

Addressing the American officials during his speech, Iran’s chief executive said, “Martyr Soleimani was official guest of the Iraqi government and by assassinating him, you both violated sovereignty of Iraq and assassinated an entire nation.”

“In the face of this horrible crime, the main violator and murderer and criminal, that is, then president of America [Donald Trump] must be put on trial and be punished in accordance with the God’s command,” Iran’s president said.

Raeisi went on to say, “If Trump and [his secretary of state, Mike] Pompeo and other criminals face trial before a just court and their horrible crime is prosecuted and they are punished for their brazen acts, it would be good. Otherwise I tell all the American statesmen that have no doubt that the [Muslim] Ummah will take revenge [for the assassination of Gen. Soleimani and his companion].”

He said the Americans thought that the assassination of General Soleimani would be “his last day,” but they were wrong as this day marked a new birthday for the top Iranian commander and he will be always remembered.

The Iranian president added that Leader of the Islamic Revolution Ayatollah Seyyed Ali Khamenei has rightly said that “martyr Soleimani” is more dangerous to the enemy than “General Soleimani,” because the likes of Soleimani will rise in the future.

The secret of General Soleimani’s victory was his fear of God, Raeisi said, adding that the top Iranian commander was aware of the US military capabilities but he strongly believed that “the US cannot do a damn thing.”

The Iranian president described General Soleimani as a “revolutionary commander that belonged to no political grouping” who had concerns about to save Islam and Muslims, sought the elimination of evil, corruption and oppression, and defended Sunnis, Shias, Palestinians, Lebanese, Yemenis, Izadis, Christians and all those who believed in the Abrahamic religions.

“Therefore, the most pressing issue for him was how to repel the enemy from the region and liberate the region,” Iran’s president said.

Iran’s permanent ambassador to the United Nations urges the UN Security Council to hold the US and Israel accountable for the assassination of top anti-terror commander Qassem Soleimani.

General Soleimani and his companions were killed in the US attack on January 3, 2020.

Five days later, in a military operation codenamed Operation Martyr Soleimani, the IRGC launched a volley of ballistic missiles at the Ain al-Asad air base in Iraq’s western province of Anbar. Over 100 American troops were later diagnosed with “traumatic brain injuries” in Ain al-Asad.

Iran has called Soleimani’s assassination state terrorism and vowed to put an end to the US military’s presence in the region as its ultimate revenge, while urging neighboring Iraq to expel US forces from the Arab country’s soil. The Islamic Republic has also pledged to bring all the perpetrators, first and foremost Trump, to justice.

In recent days, millions of people in Iran, Iraq, and elsewhere have been attending events marking the second anniversary of the two commanders’ martyrdom.

Kazem Gharibabadi, secretary general of Iran’s Human Rights Office, said on Sunday that 125 individuals, mostly US officials, have already been identified in connection with the horrendous crime against General Soleimani, and that some countries that were involved in the terrorist act were also asked to provide Iran with related information and documents.

“The Islamic Republic of Iran is determined to cooperate with Iraq, as the country where the crime took place, to identify all perpetrators, sponsors, and plotters, and bring them to justice,” Gharibabadi added.