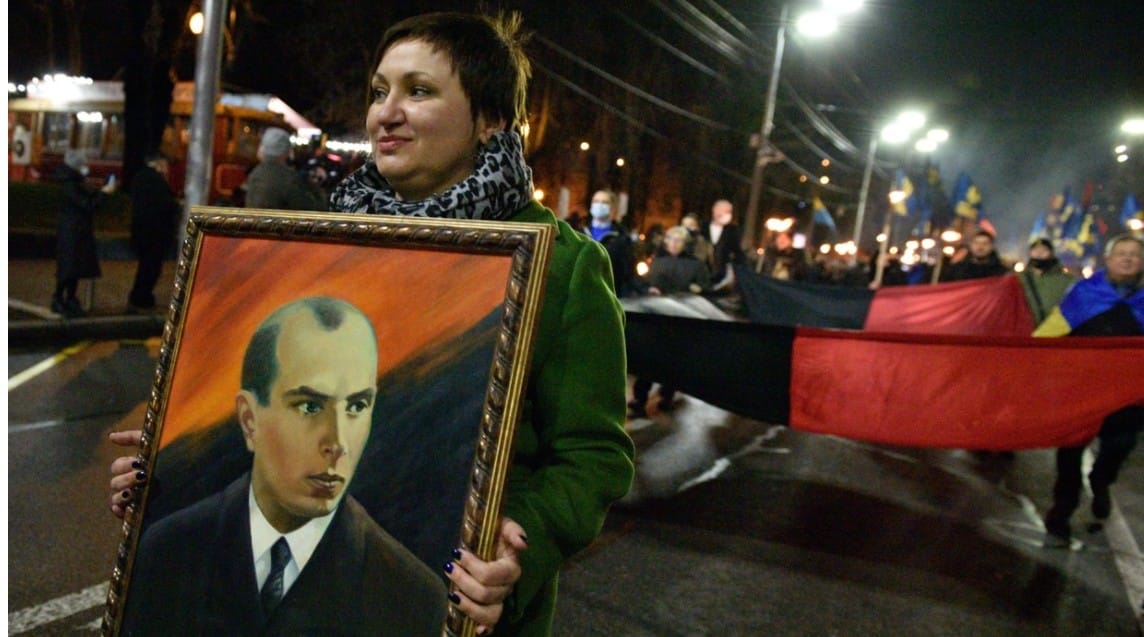 By Glenn Diesen, Professor at the University of South-Eastern Norway and an editor at the Russia in Global Affairs journal. Follow him on Twitter @glenn_diesen.

RT: The Ukrainian language channel of US state-run broadcaster RFERL is making a concerted effort to rehabilitate the life and legacy of WWII-era Nazi collaborator Stepan Bandera, widely held by historians to have been a war criminal.

A video posted by the broadcaster, registered as a “foreign agent” in Russia, earlier this month argued that Ukrainians are deeply divided about whether the wartime leader was a hero or a villain – while leaning heavily in favour of the hero narrative. RFE/RL is part of the US Agency for Global Media, a government controlled organisation, with an annual budget of over $800 billion, which is charter bound to promote the “foreign policy objectives of the United States.”

.
Bandera was the figurehead of the Organisation of Ukrainian Nationalists (OUN), which formed an alliance with Hitler’s Third Reich and played a role in rounding up Jewish people, executing civilians and fighting the advance of the Red Army. Many members of the OUN eventually fought as part of the all-Ukrainian 1st Galician division of the Waffen SS, a locally raised unit under the control of Nazi commanders.

.
The descendants of this virulent nationalist movement continue to hold Bandera aloft as their anti-Russian ideological figurehead. Bandera has been linked with a series of incidents of wartime genocide carried out upon ethnic Poles and Jews in some of the worst crimes Europe has ever witnessed.

Many of its proponents also play leading roles in Ukrainian civil and political life, and have enjoyed support and indulgence from the West. The US does not in itself have an ideological proclivity towards neo-Nazism, at least in the mainstream, but its policies come down to a question of power politics.

Washington often pushes its rivals against each other, much like all preceding empires have followed the strategy of divide and conquer, and it has on several occasions had an interest in supporting fascists as leading adversaries of the Soviet Union and Russia.

The current efforts to remake Eastern Europe into an anti-Russian front line are once again incentivising the glorification of war criminals from WWII as the leading lights of Ukrainian statehood.

Allies against the Soviet Union

The US allied with the Soviet Union against Germany during the war, although switched thereafter as West Germany became an ally and the Soviet Union became the enemy. The partnership with Germany entailed the embrace of the Himmerod memorandum, which called for ending the “defamation” of the Wehrmacht and the transformation of public opinion.

The whitewashing of Wehrmacht as an opponent of Bolshevism was deemed necessary to adapt to the new Cold War realities, which entailed legitimising the creation and partnership with the Bundeswehr as its successor.

Former adversaries became allies. Operation Paperclip, a secret US programme transferred approximately 1,600 German scientists to the US after the war for employment with the US government.

Adolf Heusinger, operations chief within the general staff of the High Command of the Nazi German Army, became the first inspector general of the Bundeswehr in 1957 and then was appointed as chairman of the NATO Military Committee in 1961. Wernher von Braun, a Major in the Nazi SS and a rocket engineer, eventually became the director of NASA’s Marshall Space Flight Centre.

Right wing nationalists collaborating with Hitler’s regime were a leading force among anti-Soviet resistant fighters in Eastern Europe during the Second World War, they were efficient “fifth columns” during the Cold War, and they remain loyal anti-Russian movements for a divided Europe after the Cold War. Case in point, Latvia still has annual Waffen SS marches through its capital of Riga to honour Nazi veterans who fought against the Red Army.

American efforts to create divisions within the multinational Soviet Union entailed support for “captive nations”, which created a common cause with nationalist and fascist movements. Ukrainian fascists from the OUN resettled in the US from the early 1950s and became an important movement to create divisions within the Soviet Union. As the OUN were sponsored by US intelligence, they had growing influence over propaganda channels such as Radio Free Europe.

After the Soviet Union collapsed, the primary objective of US policy towards Ukraine has been to prevent a Ukraine-Russia alignment and instead make the country a bastion against Russia. This demands intervening in a deeply divided Ukraine: A pluralist national identity is dominant in Eastern Ukraine, which embraces the view of Ukraine as a bi-ethnic, bicultural and bilingual state.

A monist view prevails in Western Ukraine, which defines the national identity as one ethnicity, one culture and one language. Even former Ukrainian president Viktor Yushchenko recently complained that despite seven years of conflict with Russia, approximately 40% of Ukrainians still consider Ukrainians and Russians to be one people.

When former president Yanukovich was toppled in 2014, a portrait of Stepan Bandera was hung in the Kiev city council building. That said, the fascists obviously have not monopolised power in Ukraine. The protests, riots and the coup of 2014 had to a large extent reasonable objectives such as fighting corruption and aligning closer with the EU. However, as in most revolutions, the most violent groups tend to seize power.

The radical nationalists are a minority, but an efficient minority. They had a central role in the coup as evident by the fascist insignia used openly. They became an indispensable force in the voluntary battalions, such as the Azov battalion, used against Eastern Ukrainians who opposed the coup. Their resolve continues to cement an anti-Russian position as they will march on Kiev if President Zelensky shows weakness towards Russia or abides by the Minsk peace agreement.

This influence is recognised by the US. Since 2013, the US has, every year, voted against a UN resolution devoted to “combatting glorification of Nazism”. In November 2021, the US and Ukraine were the only two countries in the entire world to vote against the resolution.

States tend to act in accordance with their fundamental interests, and then clothe these policies in the language of values and virtue. Much like US recognised the value of jihadist allies in Syria and Yemen, so have the fascists been a reliable ally against Russia. US support for extreme nationalists and fascists is sold as “democracy promotion”, and the suppression of the political opposition and media is sold as “fighting the Russian hybrid war”.

The bold new video from RFERL shows that Washington has no qualms about continuing the long tradition of rebranding fascists as freedom fighters.