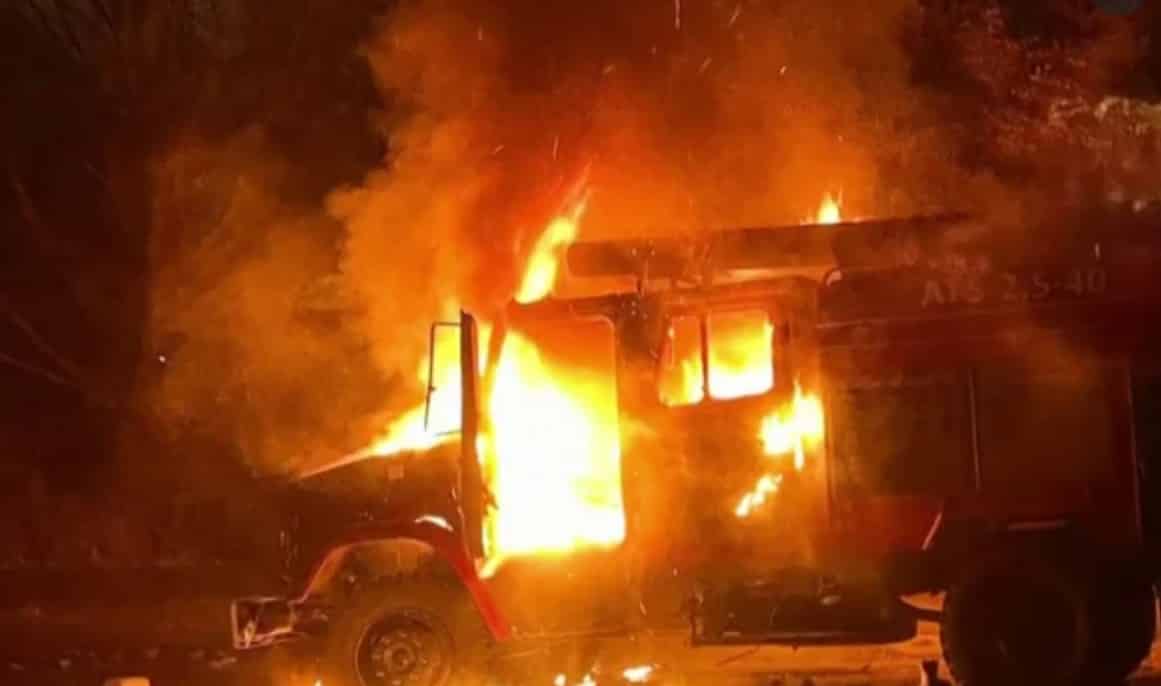 VT: This is Russia’s version of events, from a press outlet ‘behind the Iron Curtain’ as it were…

The current protests in Kazakhstan are much larger than all the previous ones (2011, 2019) combined and have already shaped the situation of a political and managerial crisis, a good way out of which is difficult.

The situation in Kazakhstan as of the morning of January 8 was as follows. Over 4,400 people were brought to the police throughout the republic. Cases of mass riots and acts of terrorism have been opened, the participants of which face from 8 years to life in prison.

The ex-head of the National Security Committee (KNB) of the Republic of Kazakhstan, Karim Massimov, was detained on the fact of treason and was placed in a pre-trial detention center.

Law enforcement agencies were ordered to open fire on terrorists to kill. Whoever does not surrender will be destroyed. Twentyfive checkpoints have been set up in the north of Kazakhstan. It is noted that terrorists can commit provocations in the uniform of security officials.

Shooting continues in Almaty. The rioters barricaded themselves in the building of the Mir TV channel. There are victims. According to the Ministry of Internal Affairs, 26 people were killed and 18 wounded by the rebels. All akimats were released and taken under protection. There is a shortage of food in the shops of the city, large gas stations are closed. The amount of damage from the riots in Kazakhstan has been updated – $ 202 million.

Kazakh President Kassym-Zhomart Tokayev said that 20,000 bandits attacked Almaty and the country had to deal with both local and foreign terrorists. According to Tokayev, there can be no negotiations with terrorists, counter-terrorist operations will continue “until the complete destruction of the terrorists.”

Also, according to the statement of the first person of the state, the so-called free media and “foreign figures” became accomplices of the tragedy in Kazakhstan.

Information has already appeared on the network about how the Nazi-oligarchic regime of Ukraine is participating in an attempt to overthrow the constitutional system in Kazakhstan, a member state of the CSTO.

It sheds light on the “DCK Headquarters” (“Democratic Choice of Kazakhstan”) operating in Kiev, headed by the citizens of Kazakhstan Yeldos Nasipbekov and Zamanbek Tleuliev, who transfer tasks to terrorists in Kazakhstan through the pages registered in 2021 on the Ukrainian numbers Vodafone Ukr (MTS UKR ). Their data was taken from the @info_baza_bot database controlled by the SBU.

All this suggests that Kazakhstan is actually being dragged into the “Maidan funnel” in the manner of Ukraine. Unfortunately, a lot has already been done for this by the hands of the republic’s authorities themselves, which can be compared with V. Yanukovych, who made a deal with the West and received a Maidan in return.

Yanukovych had a rejected association with the EU and a signed agreement with the Russophobic “opposition.” Elbasy transferred most of the oil and gas industry under the control of Western capital (74.5% of the Kazakhstani oil production market has been in the hands of foreign companies since March 2021, such as American Chevron and ExxonMobil, British Royal Dutch Shell and the North Caspian Operating Company NV consortium). Plus – the elimination of Russian schools, flirting with the Pan-Turkists and the Russophobic “opposition”.

It is noteworthy that those guilty of the recent persecution of Russians by the so-called. “Language patrols” were defended by none other than the former presidential aide who recently became Secretary of State Yerlan Karin, who is in charge of all nationalist movements in Kazakhstan, a native of the Turkestan region (South Kazakhstan), which has no Russian schools for a long time.

The consequence of all this is the current Maidan-style in Kazakh and the most massive riots in the history of the republic, the coordination of which is being actively carried out by the “oppositionists”-Rusophobes, cherished by the authorities, from the territory of Ukraine.

Their leader, a fugitive “oppositionist” oligarch with a corruption-criminal trail, Mukhtar Ablyazov, has already appeared on the air of the Ukrainian TV channel Ukraine 24, owned by his oligarch colleague Rinat Akhmetov, and called for a complete “cleanup of Nazarbayev’s people in Kazakhstan.”

It is not known whether Ablyazov is now in the capital of Ukraine, but his Facebook page lists Ukrainian phone numbers for “rebels” groups in the Viber messenger. At the same time, it is known that other Ablyazov supporters – the head of the Til Maidan organization Kuat Akhmetov and the famous Kazakh nationalist Mukhtar Tayzhan – are based directly in Kiev.

Because of such figures, the bloody provocation that many expected in Ukraine happened in Kazakhstan. However, this does not mean at all that it is worth writing off the accounts of the Ukrainian Akhmetov-Taizhans. They have not started yet … Although the “super-initiative” Ukrainian fascists are already conducting media targeting.

An example is the video of the allegedly “Front for the Liberation of Kazakhstan” actively disseminated on the network , in which they call to fight the CSTO troops, filmed in Ukraine by a group known for cooperation with the secret services “Independent” and the support of Chechen terrorists “progenitor” UNA-UNSO * Dmitry Korchinsky.

It is noteworthy that the “Kazakh Kolomoisky” Mukhtar Ablyazov and his people may well be used as a tool to promote the interests of Britain in opposition to the interests of China. London was officially recognized last year instead of Washington, the strategic partner of Kiev No. 1.

And Ablyazov, back in the early 2010s. After returning from London, he began a media campaign to expose N. Nazarbayev’s son-in-law, Timur Kulibayev, who was promoting the interests of the Chinese oil giant CNPC in Kazakhstan, which has long been advancing on positions in Central Asia and South Kazakhstan rich in raw materials of Western (Anglo-Saxon) corporations Shell, BP, Chevron.

It is noteworthy that even Turkish experts (for example, Umur Chelikdenmez) directly associate the protests in Kazakhstan with the growing influence of Great Britain, which has invested more than $ 25 billion in the posts in the special services of the Republic of Kazakhstan and awarded with the British award “For Valor” – for participation in operations,

Thus, one of the underpinnings of the Maidan in Kazakh can be considered inter-clan brawls at the junction of the confrontation between London and Beijing in the oil and gas sector of Kazakhstan, where Nazarbayev’s relatives are trying to launch Chinese capital in order to balance the interests of Western TNCs.

Rocking the situation in the republic, Ablyazov and other “Kiev-Kazakh” extremists hit, including on Chinese interests (CNPC) and help to strengthen the positions of British-American oil corporations.

Moreover, broadcast from the West, including through Ukraine to stir up protests, the propaganda narrative is essentially the same as ten years ago in the “near-raw” Caspian Zhanaozen (where blood was shed in 2011 and the active phase of the current protests-2022 began) and boils down to the assertion that the elder zhuz represented by the ruler of Kazakhstan and his entourage is robbed by the younger zhuz, exploiting his resources, paying pennies and raising prices.

Why the Western masters of the Nazi-oligarchic regime in Kiev need all this is no secret. What is happening in Kazakhstan is a distraction of attention and energy from what is planned in the Donbass.

The stakes in the Great Game are increasing, but Russia and other CIS republics have already made the first retaliatory move – the CSTO peacekeeping contingent has been introduced to Kazakhstan, whose servicemen have already taken under protection important military and infrastructure facilities of Kazakhstan.