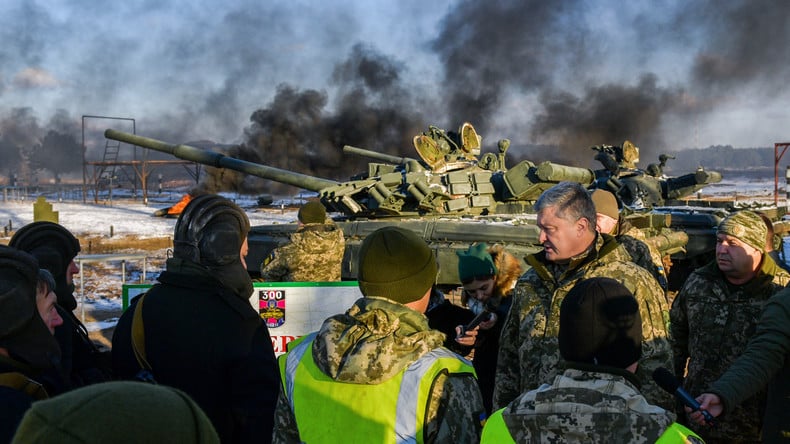 As Jim W. Dean would put it, you simply can’t make this stuff up. Zionist news outlets like CNN still think that “Russia [is] preparing an operation to justify an invasion of Ukraine.”[1] What kind of operation? It’s “a false-flag operation.”[2] Give me a break.

Scott Ritter, a former UNSCOM weapons inspector who heavily criticized the Bush administration, said that CNN was one of the news outlets that allowed fake documents and categorical lies in order to invade Iraq. Here is what Scott Ritter had to say about news media outlets for using the testimony of alleged former Iraqi nuclear scientist Khidir Hamza, “who defected from Iraq in 1994, as a rationale for invading Iraq”:

“We seized the entire records of the Iraqi nuclear program, especially the administrative records. We got a name of everybody, where they worked, what they did, and the top of the list, Saddam’s ‘Bombmaker’ [which was the title of Hamza’s book, and earned the nickname afterward] was a man named Jafar Dhia Jafar, not Khidir Hamza, and if you go down the list of the senior administrative personnel you will not find Hamza’s name in there. In fact, we didn’t find his name at all. Because in 1990, he didn’t work for the Iraqi nuclear program. He had no knowledge of it because he worked as a kickback specialist for Hussein Kamel in the Presidential Palace.

“He goes into northern Iraq and meets up with Ahmad Chalabi. He walks in and says, I’m Saddam’s ‘Bombmaker’. So they call the CIA and they say, ‘We know who you are, you’re not Saddam’s ‘Bombmaker’, go sell your story to someone else.’ And he was released, he was rejected by all intelligence services at the time, he’s a fraud.

“And here we are, someone who the CIA knows is a fraud, the US Government knows is a fraud, is allowed to sit in front of the United States Senate Committee on Foreign Relations and give testimony as an expert witness. I got a problem with that, I got a problem with the American media, and I’ve told them over and over and over again that this man is a documentable fraud, a fake, and yet they allow him to go on CNN, MSNBC, CNBC, and testify as if he actually knows what he is talking about.”

In other words, the Iraq War wasn’t “a worthy mistake,” as Neocon Jonah Goldberg would like us to believe.[3] The war was a deliberate lie that only benefitted one country on the planet: Israel. If you think this is far-fetched, then pick up The Israel Lobby and US Foreign Policy, by John J. Mearsheimer of the University of Chicago and Stephen M. Walt of Harvard.

CNN is using the same tactics that they perpetuated when the United States was seeking to invade Iraq. Listen to this:

“The US has information that indicates Russia has prepositioned a group of operatives to conduct a false-flag operation in eastern Ukraine, a US official told CNN on Friday, in an attempt to create a pretext for an invasion.

“The official said the US has evidence that the operatives are trained in urban warfare and in using explosives to carry out acts of sabotage against Russia’s own proxy forces.

“Pentagon press secretary John Kirby said the Defense Department has credible information indicating Russia has ‘prepositioned a group of operatives to execute ‘an operation designed to look like an attack on them or Russian-speaking people in Ukraine’ in order to create a reason for a potential invasion.”[4]

Didn’t the Pentagon, the US government, and indeed CNN has “credible information” indicating that Saddam had WMDs? Who are these people fooling this time? What we are seeing here is that the Israeli delusion has already poisoned the minds of many, including the people who congratulate themselves as decent journalists on CNN.

This is not the first time that CNN has been caught doing a hatchet job. In 2016, the news network announced that the New York Times’ bureau in Moscow was hacked. Who were the culprits? CNN unequivocally declared that the “hackers [were] thought to be working for Russian intelligence.”[5] What was the evidence?

Well, none was presented! A few hours later, the New York Times itself disputed the claim, saying that “We have seen no evidence that any of our internal systems, including our systems in the Moscow bureau, have been breached or compromised.”[6] Russia Today contacted the FBI and asked for evidence. Their answer? “We don’t have anything to provide you on this,”[7] they said.

So, there is no evidence, but Russia did it anyway! If that is not a conspiracy theory, then nothing is.

Going back to the question of whether Russia is seeking to invade Ukraine. It is an insult to people’s intelligence to even remotely assert that Russia is invading Ukraine precisely because Ukraine has been part of Russia since the beginning.[8] How silly it would be to say that the United States is invading California?

What CNN and other Zionist outlets will never have the courage to say is that the United States, not Russia, has been perpetuating wars since the beginning of time. Moreover, the US military has viewed the women in conquered countries as subjects to be used and re-used. As some scholars have already pointed out:

“The U.S. military displayed a colonial perception that women of occupied territories in Korea, Japan, and Germany should be sexually available for GIS…”[9]

[1] “First on CNN: US intelligence indicates Russia preparing an operation to justify the invasion of Ukraine,” CNN, January 14, 2022.

[9] Maria Höhn and Seungsook Moon, Over There: Living with the U.S. Military Empire from World War Two to the Present (Durham and London: Duke University Press, 2010), 21.