…from the Daily Sabbah

[ Editor’s note: Surprise, surprise, the Looter-in Chief Poroshenko returns to defend his country from the Russians by ‘going to court’. Now there’s a creative combat dodger if I ever saw one.

And he uses the term “we are coming”. Does that mean he and NATO? Is NATO slick enough to grab up a cannon fodder corrupt ex-president to throw against the Russian wall and see if he sticks?

It’s a bit of a gamble, as he is facing 15 years on his treason case. But this is Ukraine, and a guy with a Forbes estimated $1.5 billion net worth could be quite a Santa Claus to the right jury. The court could probably raffle the slots off and get part of the cut for itself.
–
So this will be quite a David and Goliath show, with the rich traitor squaring off against the comic. Someone once said, “You just can’t make this stuff up”… Jim W. Dean ] 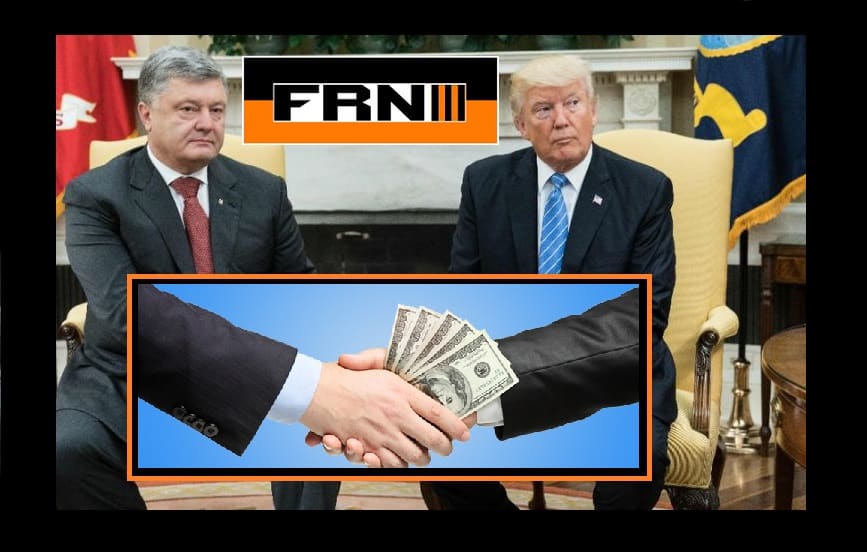 Ukraine’s former President Petro Poroshenko returned to Kyiv from Europe on Monday despite the risk of arrest, vowing to help protect the ex-Soviet country from a possible Russian invasion.

Poroshenko, who served as president from 2014 to 2019, was placed under investigation for high treason and left Ukraine in December. He returned to Kyiv early Monday on a flight from Warsaw and passed through passport control amid chaotic scenes, alleging that border guards tried to stop him from entering the country.

A court in Kyiv was to decide later Monday whether to place Poroshenko in pre-trial detention. Thousands of his supporters gathered near the airport to meet the former president.

He told them he had returned to help Ukraine face the “growing threat of Russian invasion” and accused his successor, President Volodymyr Zelenskyy, of “betrayal.”

Tensions are at an all-time high between the West and Russia as the latter has massed troops on its border with Ukraine ahead of a possible attack.

On Friday, Washington accused Moscow of sending saboteurs trained in explosives to stage an incident that could be a pretext to invade the pro-Western neighbor.

“We are here to unite and defend Ukraine,” Poroshenko told his supporters, who raised posters reading “We Need Democracy” and “Hands off Poroshenko.” “Now I’m heading to the court where we’ll give them a fight,” he said.

Poroshenko, 56, is one of the country’s richest men. He was elected president after Russia annexed the Crimean Peninsula and as fighting escalated between Kyiv’s troops and Moscow-backed separatists in the industrial east of the country.

In 2019, he was trounced in a presidential election by Zelenskyy, a comedian with no previous political experience at the time. Poroshenko is now a member of parliament and leader of an opposition party, European Solidarity.

Poroshenko is following the footsteps of Georgia’s former President Mikheil Saakashvili and Russian leader Vladimir Putin’s top critic Alexei Navalny, both returned to their countries in defiance of the authorities and are now in jail. Navalny returned to Russia on the same day a year ago.

Authorities say they are investigating dozens of alleged crimes in which Poroshenko might be involved.

He is suspected of aiding the self-proclaimed “people’s republics” of Donetsk and Luhansk in selling around 1.5 billion hryvnias ($54 million) worth of coal to Kyiv between 2014 and 2015. He faces up to 15 years in prison if convicted in the treason case.

Poroshenko denied any wrongdoing and accused Zelenskyy, 43, of orchestrating the charges to deflect attention from his domestic and foreign policy failures.

In a video message on Facebook prior to his departure, Poroshenko accused Zelenskyy of not doing enough to protect Ukraine from Russia and offered his help.

“We are ready to help the authorities. We are ready to share our thoughts and advice,” he said, adding that his party would support “all initiatives aimed at strengthening the defense potential of our state and the European direction of our country.”

Ukraine has been fighting pro-Russian separatists in the eastern Donetsk and Luhansk regions since 2014, in a conflict that has claimed more than 13,000 lives.

Russia stands accused of having amassed about 100,000 troops close to the Ukrainian border in preparation for a possible new invasion as it seeks a commitment from the West that the pro-European Union and former Soviet state will never join NATO.

Ukraine was hit by a massive cyberattack in the early hours of Friday, accusing Russia of being behind the attack. Some analysts feared it could be a prelude to an actual attack. Microsoft warned Sunday that the hack could be far worse than first thought.

SOURCEDaily Sabah
ATTENTION READERS
Due to the nature of independent content, VT cannot guarantee content validity.
We ask you to Read Our Content Policy so a clear comprehension of VT's independent non-censored media is understood and given its proper place in the world of news, opinion and media.