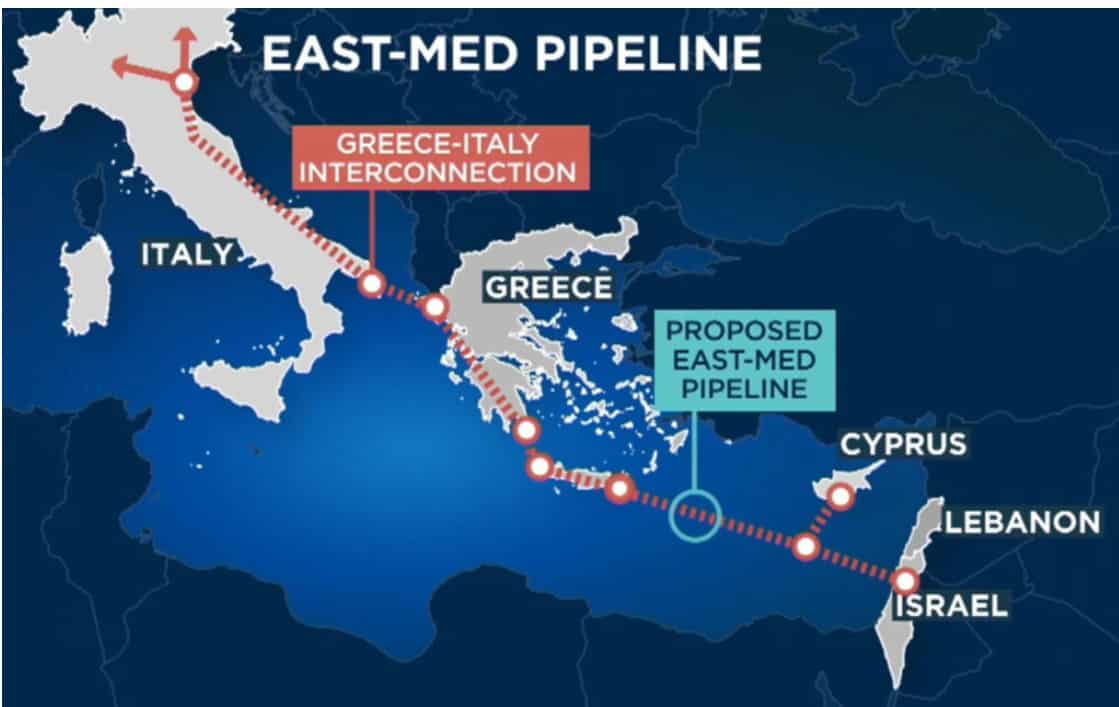 SF: The US informed Greece, Cyprus and Israel that it no longer supports the Eastern Mediterranean Gas Pipeline (EastMed) project for both ecological and financial reasons, in addition to the excuse that the project causes tensions in the region.

The EastMed agreement was signed by Greece, Cyprus and Israel in January 2020 in Athens and is supposed to transport hydrocarbons from Israeli and Cypriot fields to the Greek mainland via Cyprus and Crete, and in the long run possibly even to Italy.

Turkey immediately opposed the proposed 1,900 kilometre long pipeline. Ankara is illegally exploring for natural gas in Cypriot territorial waters and such a pipeline would end its provocations.

In an attempt to cancel the EastMed pipeline, Turkish President Recep Tayyip Erdoğan signed an agreement with the former Muslim Brotherhood government of Libya to carve up Greek maritime space between themselves – an action that received international condemnation and no support.

None-the-less, the biggest question that emerges is why Washington changed its position on the EastMed pipeline when under President Joe Biden, the US in an unprecedented manner, was supposedly distancing its relations with Turkey in favour of Greece.

According to various Greek media outlets, the change in Washington’s position is in the hope of avoiding clashes with Erdoğan, or at least avoid clashes until the end of the June 2023 Turkish election. According to Greek media, the State Department and the National Security Council are driven by the idea that Turkey, regardless of Erdoğan, should not be lost to the West.

The US Congress approved a bill in 2019 on cooperation with Eastern Mediterranean countries in the energy sector. At the time, they believed this cooperation would be a counterweight to Russian energy dominance in the European market. Yet, Washington is now retreating and Greek authorities have not yet reacted publicly. Since the accession of New Democracy to power in Greece in mid-2019, but especially after Biden entered the White House in January 2020, pro-US sentimentality in Greece grew to unprecedented levels.

According to a June 2021 Pew Survey, 63% of Greeks viewed the US favourably, following Biden’s recognition of the Armenian Genocide and more direct rhetoric towards Turkey. None-the-less, according to the same survey, only 11% of Greeks found the US to be a “very” reliable partner.

It is recalled that a January 2020 Pew Survey found that 54% of Greeks viewed the US favourably, demonstrating the spike in pro-US sentimentality after Biden’s election. However, despite the hard fought good will earned in Greece, the US withdrawal from the EastMed Pipeline has dented pro-American sentiment and temporarily silenced Washington’s cheerleaders in Athens, something that will surely strengthen pro-French/European autonomy elements within the Greek State.

Division within the Greek state apparatus is frequently reported in media and by inside sources, who point to an ideological battle between those who follow Macron’s path towards a European autonomy, and those who blindly follow Washington’s interests in the region, even if they are to the detriment of Greek interests.

Those seeking for Greece’s balance with the US, China and Russia, under the umbrella of European autonomy and Macron’s vision of a Europe from Lisbon to Vladivostok, are vindicated once again as the US is not, and never has been, a trusted and reliable partner for Greece.

In fact, this has even been noted by French media, with Observateur Continental  writing: “They proved that Greece was not as important to Washington as Turkey. The United States has proven once again that no government, not even an ally, can trust them.”

It appears that the Foreign Ministry is aware of this fact. It is noted that Foreign Minister Nikos Dendias has maintained friendly relations with his Russian counterpart Sergey Lavrov, with the pair maintaining regular contact – the most recent being only a few days ago to discuss the situations in Libya, Syria and Kazakhstan.

Lavrov commented: “we also see that Greece does not want to follow the path of worsening anti-Russian sanctions, Greece in principle does not feel satisfied with what is happening now between the West and the Russian Federation. We trust our Greek friends and that with their wisdom they will make the choice that meets their beliefs.”

However, despite Dendias’ success in maintaining Greece’s balance with the US, Russia and China, there is still a strong element within the Greek State, particularly from the Defence Ministry, that aims to capitulate to Washington’s interests.

Although this element had been strengthening over the past two or so years, they were once again dealt a major blow following the repeated US pattern of abandoning its championship of liberalism, human rights and the rule of law for the sake of appeasing Turkey against Greek interests. This is in the hope that Turkey will stay in the Western camp.