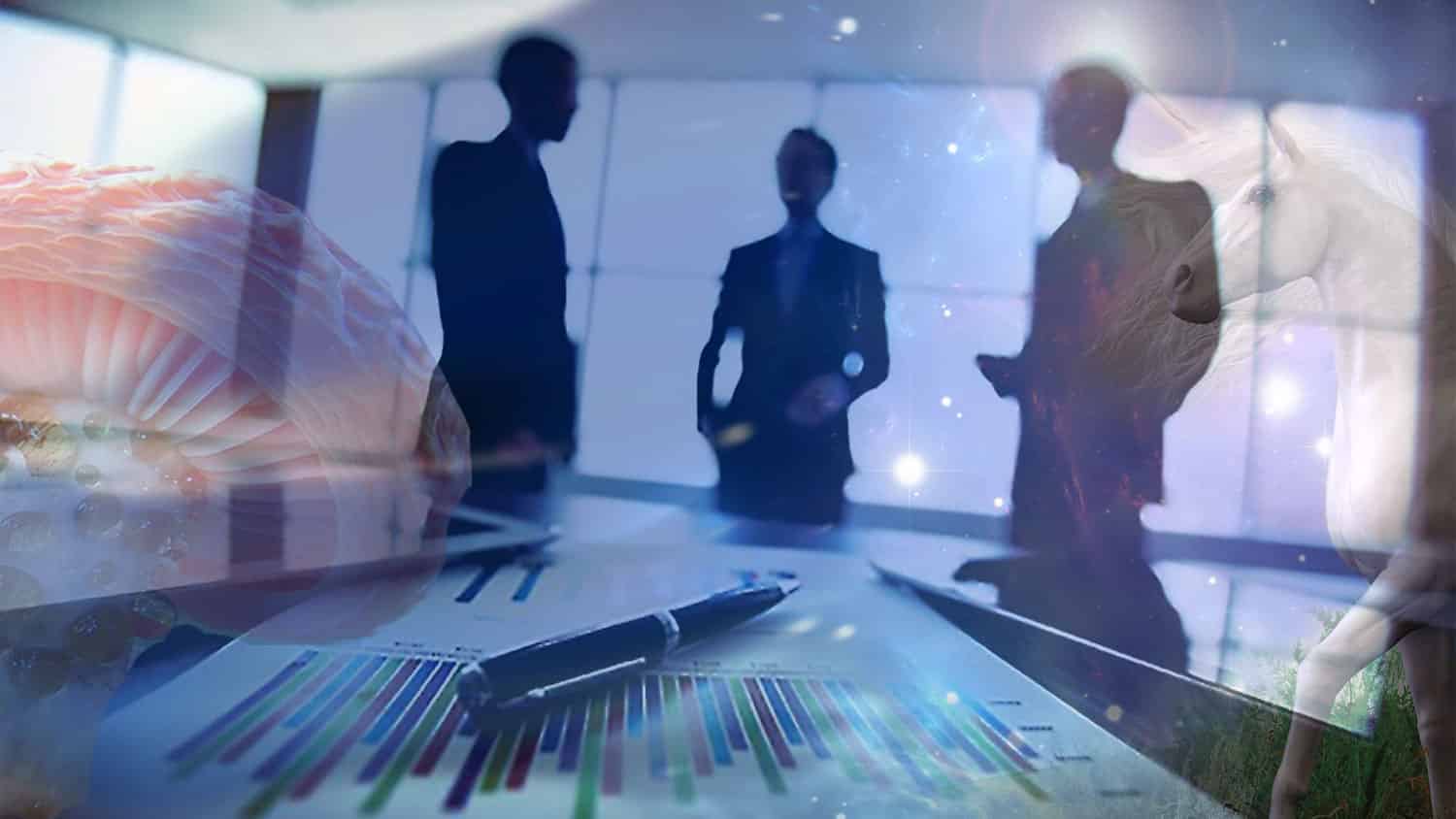 What psychedelic companies made it in 2021 and which ones are positioned to become the next big thing?

When you see the words “unicorn” and “psychedelic mushrooms” in one sentence, the stock market is probably NOT the first thing to pop into your mind. But as a “sub-pandemic” of depression and anxiety sweeps over the world, traditional medicine is overwhelmed and new treatment alternatives are desperately needed.

Enter psychedelics. After garnering significant scientific interest in the 1950s, their prominence in counterculture and the subsequent war on drugs relegated them to the realms of crime for decades. Then, in 2018, the FDA granted “Breakthrough Therapy” status for treatment-resistant depression based on psilocybin, a psychedelic compound. Approval for research into additional formulations and compounds soon followed. Public perception began to change, accelerated by the growing acceptance and legalization of both medical and recreational marijuana in many states.

Investors have flocked to the enormous breakthrough potential of psychedelics in the pharmaceutical industry and several companies involved in psychedelics research went public in 2021. Although the performance of most psychedelic stocks hasn’t been stellar so far, anything could happen if one or several formulations were to be approved for widespread use.

The field is still young–the first companies doing pharmaceutical psychedelic research only went public in 2021. But there are already several standouts who have established themselves as the leaders of the field. For example, Compass Pathways has been a clear forerunner from day one. It was the first company to receive Breakthrough Therapy designation from the FDA for its psilocybin therapy, and the first psychedelic medicine stock to list on the NASDAQ. Focusing on psilocybin-based treatments for mental health disorders, Compass already has eight patents and has several clinical trials in the works.

Another company that stands out of the crowd is Atai Life Sciences, and not only because it’s backed by Peter Thiel, the billionaire entrepreneur, and venture capitalist. It was the third psychedelics company to go public, raising $258 million in its 2021 IPO.  The biopharmaceutical company owns a number of psychedelics holdings, including Compass Pathways, and has launched a new subsidiary, several therapeutic programs, and new clinical partnerships.

MindMed is another publicly-traded company spearheading innovation with psychedelic-based substances. Unlike other companies that are focused on products for clinical settings, MindMed aims to produce prescription psychedelics that can be taken at home. It’s also developing a program to train psychiatrists in next-generation psychedelic treatments and building a digital platform to deliver psychedelic-based medications.

Cybin is also at the forefront of the pharmaceutical psychedelics world. It was the first psychedelics company to trade on the NYSE, has raised significant funds, and developed more psychedelic compounds than other leading companies.

Will the next unicorn emerge in 2022?

The established leaders in the psychedelics field aren’t the only ones worth watching–several up-and-coming companies offer exciting investment opportunities as well. A great example is  CaaMTech, a company that has invested in robust science and fundamental research, publishing tens of peer-reviewed scientific research publications.  Rather than focusing on a specific compound, CaaMTech has produced an extensive library of novel, analytically pure compounds that are expected to be ready for human trials in the near future and have attracted millions of dollars in investments.

Another company with unique potential is Irwin Naturals. A leading supplier of health supplements to major US chains such as Costco, Walgreens, CVS, and Walmart, Irwin Naturals is a household name in the United States. Irwin has already proved that it can capitalize on its brand for new products by successfully launching hemp-based CBD products into the mass market, becoming one of the largest CBD wholesalers in the nation.

Irwin Naturals launched a subsidiary called Irwin Naturals Emergence in October 2021, focused on ketamine-assisted psychedelic treatments for mental health issues. Ketamine is already legal in the U.S., and by focusing on that substance, Irwin Naturals Emergence is hoping to circumvent the cumbersome regulatory process for psychedelic compounds. As it did with CBD, Irwin plans to leverage the company’s volume and distribution infrastructure to drive prices for the costly ketamine down. It plans to enhance its significant infrastructure with a nationwide network of ketamine clinics in the US and retreats in nearby countries where people can receive treatment with psychedelics that are not yet approved in the U.S. The outstanding infrastructure should position Irwin to take over a significant market share if and when psychedelic substances are approved for use.

There are several innovative companies and formulations that show promise but the pharmaceutical industry is notoriously complex. There are still numerous unknown variables that make it hard to predict which companies will come out ahead, and which will disappear from the pharmaceutical psychedelics landscape.  Rather than trying to solve an impossible equation, another option is to invest in an ETF like Defiance’s PSY. Like the many cannabis ETFs (or weed ETFs), Defiance’s psychedelic ETF gives investors the opportunity to add this promising field to their portfolio, while reducing the risk inherent in investing in a specific company.

Fund holdings and sector allocations are subject to change at any time and should not be considered recommendations to buy or sell any security.

Investing involves risk. Principal loss is possible. As an ETF, the fund may trade at a premium or discount to NAV. Shares of any ETF are bought and sold at market price (not NAV) and are not individually redeemed from the Fund. The Fund is not actively managed and would not sell a security due to current or projected underperformance unless that security is removed from the Index or is required upon a reconstitution of the Index.

A portfolio concentrated in a single industry or country may be subject to a higher degree of risk. Specifically, the Index (and as a result, the Fund) is expected to be concentrated in Psychedelics Healthcare and Medical Cannabis companies. Such companies may depend largely on government regulation and their profitability can be significantly affected by restrictions on government reimbursements for medical expenses, rising costs of products and services, pricing pressure, limited product lines, intellectual property rights, and long and costly government products approval processes. The investments rely on U.S. and Canadian regulation of psychedelic, healthcare, and cannabis, and the fund could be adversely affected by changes in these regulations.

The Fund will not invest directly in or hold ownership in any companies that engage in cannabis- or psychedelics-related business unless permitted by national and local laws of the relevant jurisdiction, including U.S. federal and state laws. Accordingly, the Fund does not currently invest (directly or indirectly) in companies located in the United States if their cannabis- or psychedelics-related business activities are illegal under U.S. federal law, even if such activities are legal under state law. In the United States and Canada, the medical and recreational use of certain psychedelic drugs, including psilocybin, is currently illegal. There is no guarantee that psychedelic drugs or psychedelic-inspired drugs will ever be approved as medicines in either jurisdiction.

The Fund is considered to be non-diversified, so it may invest more of its assets in the securities of a single issuer or a smaller number of issuers. Investments in foreign securities involve certain risks including risk of loss due to foreign currency fluctuations or to political or economic instability. Small and mid-cap companies are subject to greater and more unpredictable price changes than securities of large-cap companies.

PSY is new with a limited operating history.

Total return represents changes to the NAV and accounts for distributions from the fund.

The BITA Medical Psychedelics, Cannabis, and Ketamine Index is owned, calculated, administered, and disseminated by BITA GmbH. It is not possible to invest directly in an index.

Commissions may be charged on trades.