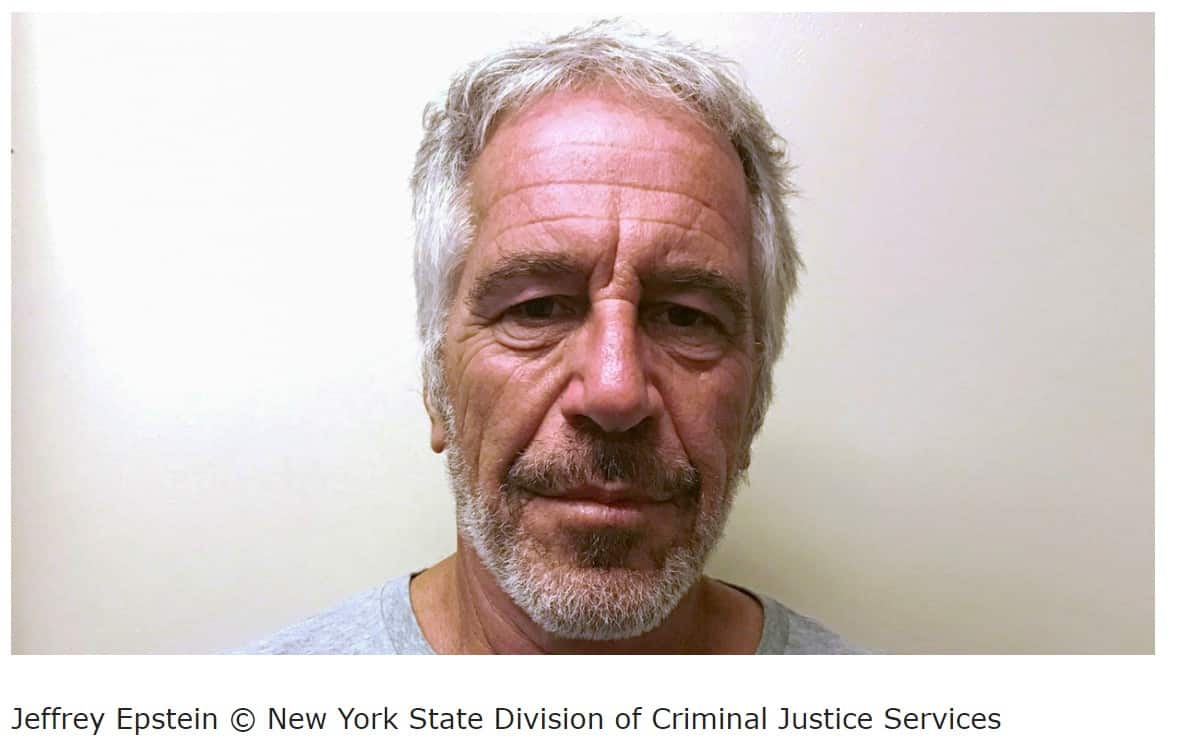 And Keelan Balderson, a UK-based journalist interested in security services, and misuse of state power. Follow his work at @altnewsuk.

US Federal Bureau of Prisons (BOP) documents released to RT investigative unit The Detail pose serious questions about Jeffrey Epstein’s alleged attempt to kill himself while incarcerated in the Metropolitan Correctional Center. The files, released in response to a Freedom of Information request, cast doubt on this key component of the official narrative surrounding his ever-mysterious alleged suicide – namely, did it even happen?

According to the established timeline of events, Epstein was found injured and semi-conscious on the floor of his cell in the early hours of July 23, 2019, 17 days after his imprisonment on charges of child sex trafficking, with marks of an unspecified nature around his neck. Claiming to remember nothing about what happened, his cellmate, former NYPD officer Nicholas Tartaglione – who has coincidentally shared the same legal representation as Epstein’s partner and ‘madam’ Ghislaine Maxwell – likewise pleaded ignorance.

The files show that within minutes of the alleged incident, an attempted suicide by “hanging/asphyxiation” was officially logged, although sections of the report describing what happened are totally redacted, as is the name of the individual who authored it. In a report written by the doctor who examined Epstein around five hours later, Epstein’s own account of how he sustained the injuries is, too, entirely blanked out.

The following day, Epstein was taken off suicide watch and charged with violating prison code 228, “tattooing or self-mutilation.” He was subject to a psychological assessment, with one official suggesting, “most likely he will be found competent because he is not mentally ill,” while another enquired as to whether or not Epstein was “mentally capable of proceeding with the disciplinary process.” Oddly, in response, an unnamed staffer wrote, “I would feel really uncomfortable doing this.”

Several copies of the incident report are reproduced in the files, but it wasn’t until a week later, on July 30, that the document was amended to include “self-mutilation” as the cause of suicide attempt, specifying “lacerations”. But the doctor’s report from just hours after the incident doesn’t mention lacerations at all – in fact it explicitly states none were found – begging the question of why this was written into the official record days later.

Pending investigation for that breach, Epstein was placed in disciplinary confinement away from the “general population,” and refused to be returned there. Meanwhile, officials probed “appropriate candidates” for a new cellmate.

A thorough review was clearly conducted, with one memo noting that other inmates in the Secure Housing Unit were deemed “not appropriate to be housed with Mr. Epstein,” for reasons unstated, although one “notable” prisoner “with a history of sex offenses” was explicitly ruled out “due to his threatening nature.”

After the psychological evaluation found him competent to take part in the disciplinary process, the files record the prison’s brief investigation into the “self-mutilation” charge, on July 30.

A resultant report noted that, “no witnesses [were] requested” and “inmate Epstein had a poor attitude,” refusing to say anything. Despite this, the investigator concluded “the report to be accurate as written and the charge warranted.” The matter was kicked upstairs for “further disposition,” but it appears Epstein died before a final decision on his supposed infraction was taken.

Even more curiously, a classified internal BOP memo notes that the incident report related to self-mutilation was “expunged” – in other words stricken from the record, as if it never happened – five days after Epstein’s death. An official added that it was “unclear why it had been expunged and whether Mr. Epstein knew this.”

This may account for why the entire bizarre episode, in which prison authorities sought to punish the billionaire sex offender for the crime of trying to take his own life, has never hitherto been mentioned by the mainstream media.

Complicating the confused picture even further, on August 14, 2019, four days after his death, the New York Post published a sensational exclusive, claiming that Epstein informed his lawyers Tartaglione “roughed him up,” and this was not only the reason he was discovered out cold in his cell, but why he was removed from suicide watch.

Tartaglione’s lawyer, Bruce Barket, has vigorously disputed this account, suggesting the story was planted in the Post by a prison guard “angry at [Epstein] for complaining at the deplorable conditions at the Metropolitan Correctional Center.” Moreover, Barket records that Epstein and Tartaglione “regularly walked from their cell to the visiting area together,” as their lawyers were on the “same schedule,” and the pair “got along real well.”

“I’d be surprised if they later claimed Nick attacked him, because that’s not what we were told all along,” Barket has declared.

The records released to The Detail make it abundantly clear that Epstein did indeed complain frequently to prison authorities. However, his grievances were fairly routine – a lack of toilet paper, the toilet flushing continuously for 45 minutes, his cellmate talking too much, especially at night. There isn’t the slightest indication he ever felt threatened or in danger, either from inmates or guards.

This may in part result from him being placed for much of his stay with the hulking Tartaglione. A veritable man mountain, he faces the death penalty for allegedly committing a quadruple homicide in furtherance of a conspiracy to sell cocaine – one victim was strangled with a zip tie. He was chosen to bunk with Epstein due to cooperating with authorities in his case, and having much to lose if he committed an infraction of any kind, let alone attacked his cellmate.

Such pally protection may moreover to some degree account for why, in several psychological assessments at the prison in the wake of his apparent suicide attempt, Epstein was a picture of optimism and stability.

One noted the subject was “alert … polite, calm, and cooperative in demeanor,” and explicitly denied “recent and current suicidal ideation, planning, and intent.” He was said to be “future-oriented,” and “expressed a commitment to life and safety, agreeing to contact staff immediately should he experience suicidal ideation or psychological distress.”

“He exhibited a neutral affect with appropriate range. Eye contact and hygiene were appropriate … His thoughts were organized and coherent, with no loosening of associations or tangential, circumstantial, or irrelevant content,” a prison-designated psychologist wrote. “There was no evidence of perceptual disturbance, delusional ideation, or a formal thought disorder. He did not engage in any bizarre or inappropriate behavior.”

Another appraisal spelled out “protective factors” determined from conversations with Epstein, noting he “he denied current suicidal or self-harm thoughts” or “feeling hopeless.”

“He denied fearing for his safety … He stated he lives for and plans to finish this case and to go back to his normal life … His friends and lawyers are emotionally supportive … He is Jewish [and] suicide is against the religion. Overall, his current protective factors override his risk factors for suicidality,” they remarked. “Suicide watch is not warranted at this time.”

Despite this, Epstein was briefly placed on suicide watch, and the documents show detailed accounts were filed every 15 minutes by guards as to his activities – “inmate Epstein is sleeping; inmate Epstein is lying quietly in bed; inmate Epstein is pacing around in his cell,” etcetera. This intensive surveillance was downgraded on July 24, 2019, to the lesser “psychological observation.”

Six days later, Tartaglione was replaced by Efrain Reyes, who was assisting the government in a drug distribution conspiracy case, although on August 9, he too was removed, leaving Epstein alone – in breach of internal procedures, and despite the classified files making clear the urgent need for a new cellmate was communicated between day and evening watch shifts at the jail.

The next day, he was dead. Contemporary news reports noted his associates were “surprised” at the news, as the prolific pedophile “seemed recently to be in good spirits,” leading them to express concern “about the possibility of foul play.”

Epstein and Maxwell were a ‘Batman and Robin’ duo, says Prince Andrew’s ex

Regular half-hour checks on the inmate also ceased, contrary to standard procedure, as designated guards Tova Noel and Michael Thomas spent substantial portions of shift at their desk, browsing the internet, and moving around the common area, mere meters away from Epstein’s cell.

Moreover, two cameras in the vicinity apparently malfunctioned, while a third in the adjacent hallway was also corrupted. Some footage in some areas is said to exist, but has not been released publicly. Noel and Thomas subsequently admitted to fabricating log entries, and were charged with lying on prison records.

A serious crime indeed, but on December 13, 2020, the charges were summarily dropped. This wasn’t disclosed publicly until December 30, though – a day after Maxwell was found guilty of recruiting and trafficking young girls for sexual abuse.

Strikingly, in its reporting on the prison’s psychological assessments of Epstein, the New York Times framed the prolific sex offender’s insistence he had no intention whatsoever of committing suicide as a testament to his “life of manipulation,” immense skill at deceiving others, and endless ability to “[create] illusions.”

Another obvious interpretation, apparently unconsidered by America’s purported paper of record, is that his denial of suicidal intentions and hopefulness about the future could well have been sincere – and his death may thus be attributable to external actors and factors unknown.