[ Editor’s Note: We are in a hard freeze here in Michigan. Inside where it is warm we have more time to look back on the past turbulent year and look forward to the changing environment we are in, not only politically but with media.

So I was happy to catch Politico’s retrospective today as a good starting point for a subject that is going to be with us for a long time, questions about what is media really trying to do for us now, or…do to us, as the case may be?

At what point will the public be maxed out on absorbing information, including the bogus kind that seems hardwired into the current structure by malevolent actors? What is going to eventually be our last word on the constant chaos? Or will the Crime bosses of chaos be making the decision for us?

–
Will monasteries begin popping up as escape refuges for those who have O’Ded on news? Will extremist group ideologies multiply and become more anti-everybody else, as everyone fights to have the last word on a topic?

And who will be blamed for the anticipated continued degradation of countries? Those of us from the long Cold War years have seen all of this over and over, as chaos almost always preceded coups, and opposition to the coup has to be totally distracted to ensure its success.

We have a glaring example of that sitting in our laps now with the Jan6 investigation. Part of the methodology of doing a coup is you have to be 100% sure that no military, police, or security forces can intercede at the critical moment to save the soon-to-be-old regime.

The options are: including the leadership of such rescue forces into the plot; buying them off to do nothing and watch from the bleachers; or ‘eliminating’ them at the beginning of the coup, replacing them with ambitious officers below them looking to be the new boss.

But The Who captured the potential result of the latter in their song, Won’t Get Fooled Again, “Meet the new boss, the same as the old boss.”

So far the Jan6 Committee has been deathly quiet about actors in the Pentagon standing the National Guard down on Insurrection day.

Even Trump is brash enough now, as a diversion, to ask ‘Where was the National Guard that day”…thinking that we will miss that General Michael Flynn’s brother at the Pentagon was right at the choke point to hold the Guard back with General Piatt.

So far only Colonel Earl Matthews, a high-ranking Army attorney has formally charged with such and has not disappeared from the news. Why? The Who song even has some lyrics for the Trumpers to enjoy:

It’s almost conventional wisdom right now that the news media is in a fast-moving crisis, with mainstream news sources collapsing and Americans increasingly divided not only in what they read but even what facts they choose to believe. How much worse will it get? Or is there a way out?

The changes in the media industry make it nearly impossible to guess. When POLITICO was born 15 years ago, a digital-first politics site was considered downright disruptive in Washington, D.C. Today, that sounds almost quaint compared to what was on the way:

Facebook was a baby, and Instagram was just a twinkle in a code developer’s eye. “Pandemic” meant the Spanish Flu of 1918 — and “Zoom” was a kids’ show from the ’70s. Information now flows in ways nobody was even considering in 2007, and over the next decade and a half, media is poised to change even more dramatically.

…When shunted through digital media, information behaves like water: It flows together, it melds and it finds its lowest common level. The trivial blurs with the profound, the false with the true. The news bulletin and the dance meme travel in the same stream, with the same weight. Content collapses.

…Barring an epochal change of heart or habit on the part of the public, the flow of information will only get faster and more discordant in the years ahead. 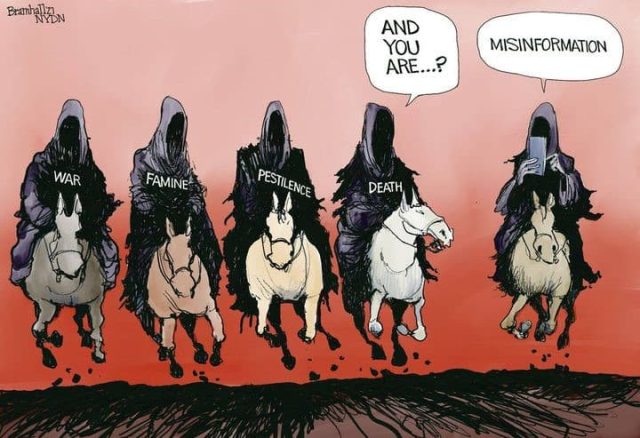