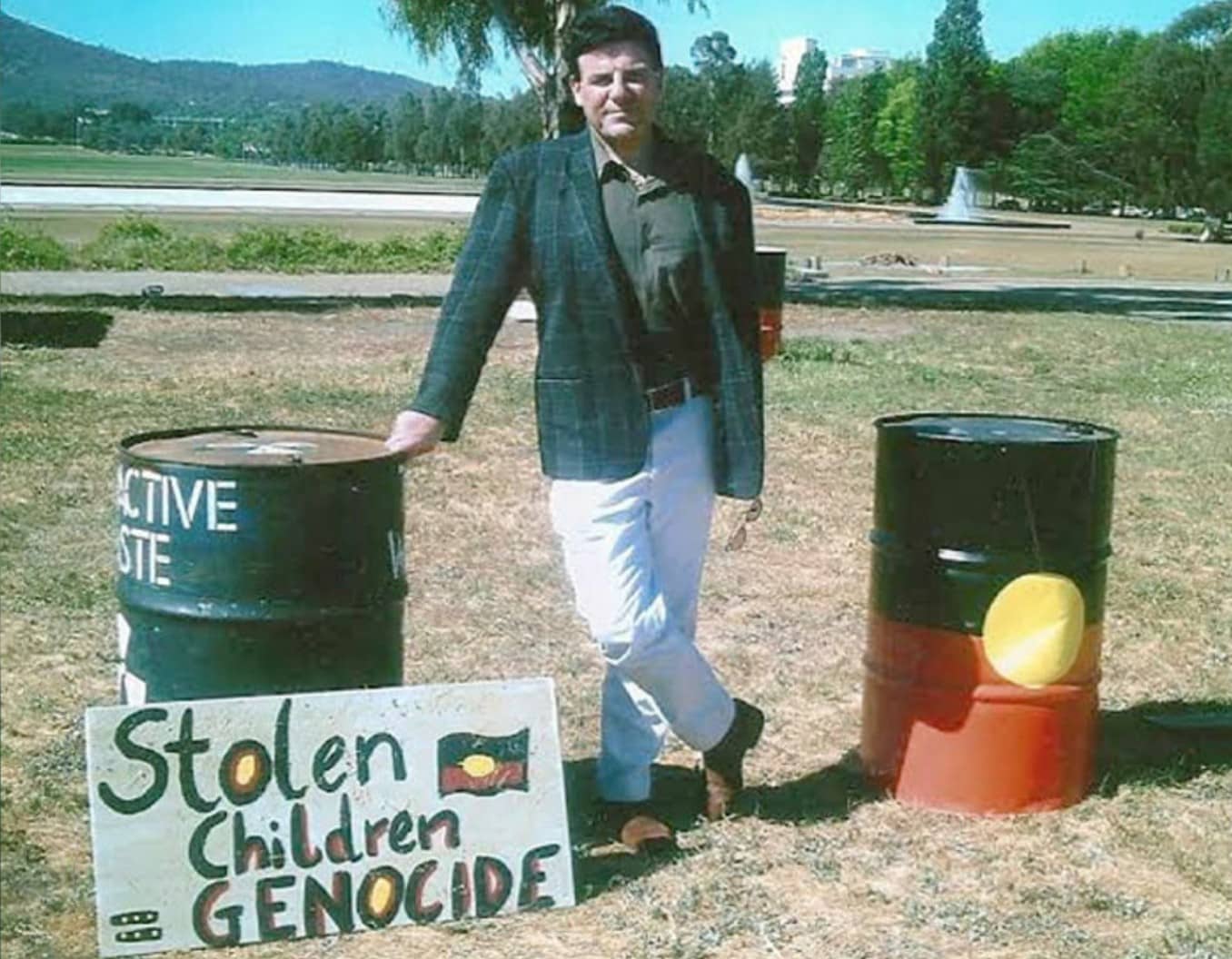 RT: Millions celebrate Australia Day, held annually on January 26 to mark the arrival of the first fleet of British colonialists in Sydney Cove in 1788. But to many Indigenous people, including Rob Arnol, an elder of the Palawa, the Aboriginal community from Tasmania, it is a day of shame rather than celebration.

He sees it as a beacon for racists, telling RT: “It’s giving white supremacists an added voice and power. They start mouthing off and a lot of drunk, white Australians get on social media and agree with them. There’s a lot of nationalistic jingoism, and for white Australia it generally seems to be a day off to have a piss-up in the middle of summer.”

Arnol, 57, has witnessed discrimination all his life. He’s seen fellow tribesperson Truganini’s skeleton displayed in a museum and other Indigenous people’s heads pickled. To him, a lot of the sentiment behind January 26 is a natural follow-on from this.

“Australia happens to be a very racist country, although the racism now is different to what it was years ago,” he continued. “There was a time when my father wasn’t allowed into the local hotels if he wanted to have a drink; they would pass a beer outside the window to him. Before that, his uncles couldn’t even do that. They’d all fought in World War II, but were only paid half wages.”

Arnol shudders as he recalls the Boundary Streets which existed in many Australian towns. The name explains their purpose – Aboriginal people weren’t allowed beyond them after 4pm. But when Arnol was a child, overt discrimination was a fact of life. He said, “It’s only as you learn about the injustices as you grow older that you realise how young kids are having a better life than what we had. But when it comes to racism, change is much slower than any other type of change, especially here in Australia.”

While January 26 may mark a significant day in history, Australia Day has only been an official holiday since 1994, although it was celebrated unofficially for years before. A counter Invasion Day movement has existed since the 1930s, but with nothing like its current profile. Invasion Day rallies and events will be held across the country following a major gathering that took place in Sydney last year.

Bakchos Glass, 50, is one of the Wiradjuri, the largest Aboriginal group in New South Wales, and says January 26 should be considered a “day of mourning”.

He stated, “It is for me and many others in the First Nations community. I never left my country or ceded any part of it. Nobody has entered into a treaty or talked to me about who I am, and therein lies the essence of First Nations resistance to January 26.”

Glass’ emotive language highlights the strength of feeling that’s prevalent in the Aboriginal community. He continued, “There was no treaty, were no negotiations, just invasion followed by murder, rape, and ultimately attempted genocide.

“What white Australia is actually asking of black Australia is that we celebrate on January 26 the enslavement of our people, the death of our culture, the rape of our women, and the murder of our men.”

Along with loss of land, Aboriginal communities have endured systemic disenfranchisement and still face a variety of issues. For example, although they comprise just three percent of the national population, they make up 28 percent of the prison population, meaning they are proportionally the most incarcerated people on the planet.

In addition, a New South Wales study showed they had almost double the rate of high/very high psychological distress observed in non-Aboriginal people. Plus government figures from 2001 to 2020 demonstrated that the rate of suicide in Aboriginal people was 1.4 to 2.4 times that of non-Indigenous Australians, while in the specific 0-24 age group, it was 3.2 times higher.

Arnol added, “In New South Wales, there was plenty of coverage recently when there was a really bad outbreak of Covid. People were shocked the average life expectancy for a man up there is 37 and for a woman, 39. In one of the richest countries in the world, this is how the native people are basically treated – and nothing is being done about it.”

So, what could be done? For a start, is there a way to change what Australia Day represents?

Glass believes so, saying, “I have absolutely no issue with having a national day to celebrate being Australian, but the date must be one that all people who call Australia home can embrace with pride.” That’s echoed by Anrol, who backs the idea of moving the day to May 8 – a play on the Australian use of ‘mate’ as a term of endearment – in an effort to make the celebration more inclusive.

There appears to be little appetite from the authorities for any such change, however.

Last year, Prime Minister Scott Morrison said the day represented how far Australia had come and added, “There is no escaping or cancelling this fact. For better and worse, it was the moment where the journey to our modern nation began.”

While a date change would be a start, there are clearly more serious issues that need to be addressed. Many Aboriginal people feel they remain wrongly stereotyped, as Debbie Fletcher from the Kalkadoon Nation in Queensland pointed out.

She told RT, “First Nations people in Australia are still demonised, and experience significant racism, both personal and systemic. The mainstream media continue to perpetuate the stereotyping of First Nations people, such as we are lazy, violent, and drunks.”

Part of the frustration is Aboriginals feel they have no voice. Thomas Mayor, a Kaurareg Aboriginal and Kalkalgal, Erubamle Torres Strait Islander, said: “What must be understood is that Australia is a country with a constitution. We are a representative democracy. Yet Indigenous peoples are not recognised in our constitution, and we have no self-determination as to who represents us and our political priorities. The immediate goal is constitutional change to provide my people with a guaranteed representative body.”

Mayor, 44, is an author of books with an Aboriginal theme and feels education is key. “Australia is a country yet to reckon with its past and the Indigenous people that were dispossessed, slaughtered, and excluded. We are a nation that is worse than ignorant to our past,” he added.

While overt racism has decreased, one of the big concerns for Indigenous groups is being forced from their land so mineral resources can be acquired.

Arnol claimed, “I think it’s genocide by stealth. If they don’t do anything [to help communities], or drag their feet, more people will die off and the communities become unviable as a tribal group or nation. So they can say, ‘The land is no longer owned by this particularly community and we can mine it now’.”

This is a sentiment shared by Debbie Fletcher. She said, “It is my view it serves our current and subsequent governments’ purpose to keep us oppressed so they are able to continue to use our land for mining, gas, and logging.”

Nevertheless, there’s undoubtedly increasing public support for Invasion Day and the meaning behind it. Significantly, it’s breaking the notion that Indigenous people want to exclude themselves. “Culture is very important to us and we like to keep a link to our past, but at the same time the Aboriginal population enjoy creature comforts like electricity, mobile phones, and things like that. We want to have the benefits of modern civilization, but still maintain our links with the oldest culture on the planet,” said Arnol. “Ten years ago, I would not have believed the amount of support we have now. I’ve mentioned it a couple of times to other Aboriginal people around the country and they say the same thing.”

All of the Aboriginal people I spoke to agreed on one thing – the need for a peaceful resolution. If they are a gauge, the Indigenous community isn’t consumed by bitterness or blaming white Australians for their ancestors’ actions.

And Arnol has one piece of advice for anyone unsure of Aboriginal people’s intentions.

“A lot of people have the wrong idea and that’s because no one has ever taken the time to stop and talk to an Aboriginal person,” he said. “People are scared of what they don’t know. If people were to stop and ask questions they’ll find we don’t mind talking, Stop and say ‘G’day’ and get to know us.”