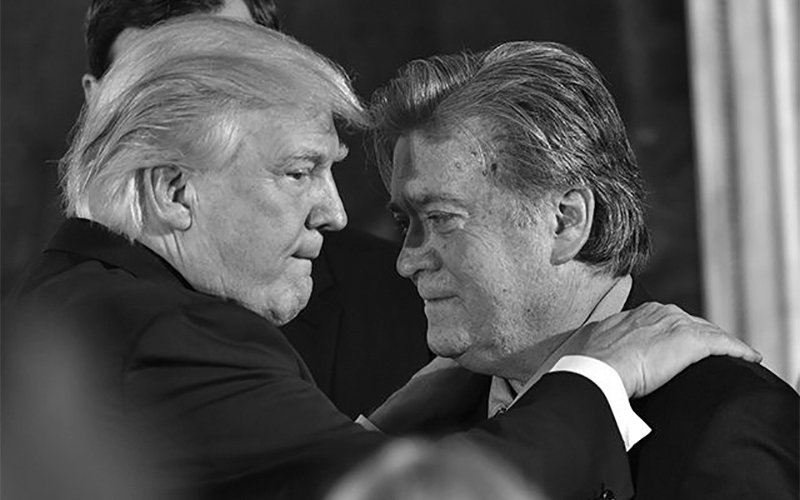 Steve Bannon was deplatformed. An obscure media mogul keeps him on the air.

[ Editor’s Note: Some of the hard core Trumpers have their heels dug in, not only by not cooperating with the Jan6 Insurrection, but doubling down on their Insurrection 2.0 by other means, their revenge for the loss of the first one.

The first one was easy by comparison to what is going on now, and none of the Trump major players saw any downside to their efforts to overthrow the election.

Rest assured that while the first attack is getting sliced and diced, the DoJ is not sitting on its butt while the second try is in play. It took much too long for the special DoJ division to be publicly announced, which left the door wide open for the ‘death threat’ cowards.

Out of fairness I must add that the DoJ might have laid low to have a lot of them expose themselves so they could later launch a big round up, but it seems they are just traditionally bringing cases against them.

But that has to be measured against all the potential damage of having experienced Democrat election workers now gone and replace by shills in a critical election year.

Trump’s losing the Archive’s case is a tipping point. He and his mob has sloughed off the 63 to 1 court case losses on their fake claims as being of no consequence. Judges, even Republican ones, are not too thrilled at hearing their rulings don’t mean anything.

They do not want to be made fools of, and the Supreme Court 8 to 1 decision carved that attitude in stone. For now I view it as the tipping point for the Trump house of cards to fall down.

Lots of felony convictions is the judicial enema that needs to rammed up the butt of Insurrections I and II, as a proper deterrent. And that includes many of the Trump lawyers that went over to the dark side.

Think about the silliness of the bogeyman claims over Putin’s ready reaction force on the Ukraine border, which he would never unleash without a major attack from the West. Yet here at home with Barbarians Inside the Gate, many Americans think that war provocation is just wonderful, as they look forward to the destruction beginning.

We must disappoint them in a way they will regret, or this could continue on, albeit with different players at the helm. Thus ends my cheery missive for today… Jim W. Dean ]

“We were told fairly regularly we were Trump propaganda,” said a former Real America’s Voice producer, who, like about a dozen other current and former employees of Sigg’s business, spoke on the condition of anonymity to avoid professional reprisal.

“That is what our role was. That was the message from the top: ‘We’re a Trump propaganda network.’ That’s where the money was.”

That market was left open when Fox News and Newsmax pulled back from topics most motivating to Trump’s base, said Bannon, such as resistance to vaccines, cries of voter fraud and unproven ideas about federal agents provoking the pro-Trump riot at the Capitol.

“War Room” focuses on those topics. Its influence comes not just from the number of people watching, which is difficult to measure across platforms, but also from the audience’s willingness to take political action, whether marching against vaccine mandates or running for local office.

The show, broadcast live six days a week from Bannon’s Capitol Hill townhouse, is the gathering point for the pro-Trump movement — with Bannon embracing the role of a wartime general leading followers into 2022, or what he calls the “valley of decision.”

You can read the full WaPo article here.