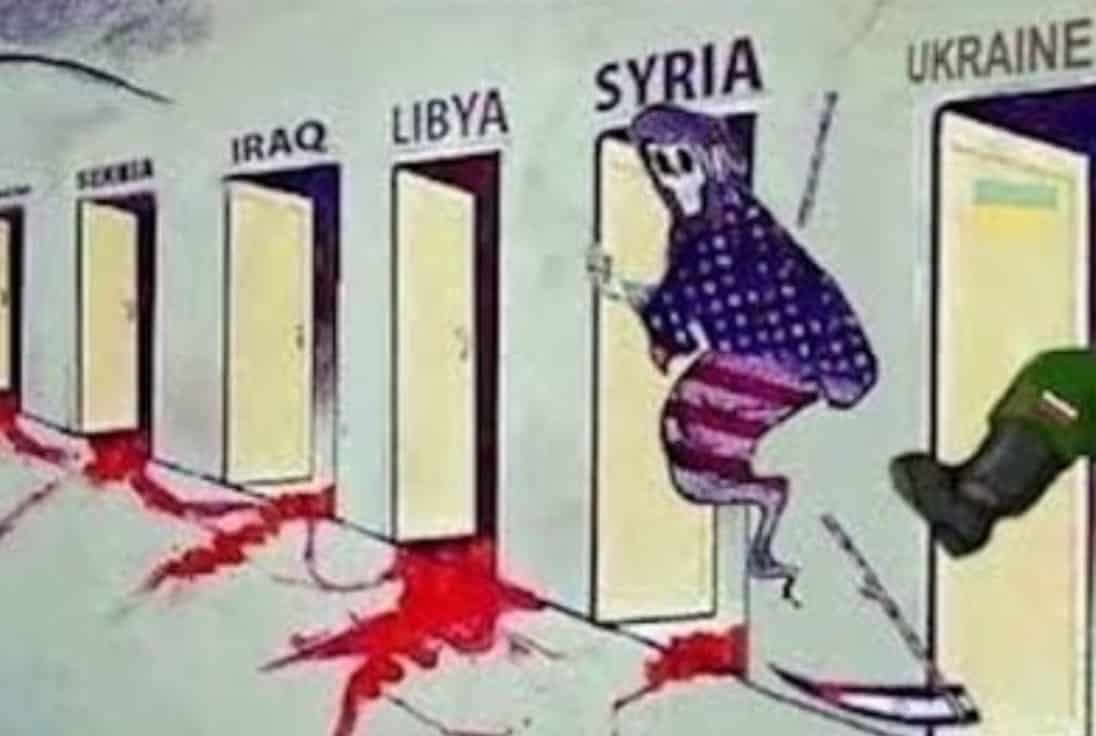 The State Department, “as a precautionary measure against a possible Russian invasion of Ukraine”, ordered the evacuation of family members and part of the staff from the U.S. Embassy in Kiev, which with 900 officials is among the largest in Europe, and raised to level 4 of risk, the maximum, the warning to U.S. citizens not to go to Ukraine.

Immediately afterwards the Foreign Office announced, with the same motivation, the withdrawal of staff from the British Embassy in Kiev. These operations of psychological warfare, aimed at creating alarm about an imminent Russian invasion of Ukraine and the three Baltic republics, prepare for a further and even more dangerous US-NATO escalation against Russia.

The White House announced that President Biden is considering “deploying several thousand U.S. troops, warships and aircraft to NATO countries in the Baltics and Eastern Europe.” Initially, 5,500 U.S. troops are expected to arrive, joining the 4,000 already in Poland and followed by thousands more, extending their permanent deployment to the Baltic, as Latvia has requested.

Special rail convoys are already transporting U.S. tanks from Poland to Ukraine, whose armed forces have been trained for years, and in fact commanded by hundreds of U.S. military advisers and instructors flanked by others from NATO.

Washington, which last year provided Kiev with weapons for the official amount of 650 million dollars, has authorized Estonia, Latvia and Lithuania to transfer to Ukraine US weapons in their possession, in particular Javelin missiles. Other armaments are provided by Great Britain and the Czech Republic.

NATO informs that the European countries of the Alliance are putting their armed forces in a state of operational readiness and sending other warships and fighter planes to the Eastern Europe deployments. Italy, with Eurofighter fighter-bombers, has taken command of NATO’s “enhanced air policing” mission in Romania. France is ready to send troops to Romania under NATO command. Spain is sending warships in NATO naval forces and fighter-bombers to Bulgaria.

The Netherlands is preparing to send F-35 fighters to Bulgaria. Denmark is sending F-16 fighters to Lithuania. Yesterday began in the Mediterranean Sea the great NATO naval exercise Neptune Strike ’22 under the command of Vice Admiral Eugene Black, commander of the Sixth Fleet with headquarters in Naples Capodichino and base in Gaeta.

The exercise, which lasts 12 days, involves the US nuclear aircraft carrier Harry Truman with its battle group, including 5 missile launchers ready for nuclear attack to “reassure the European Allies especially on the eastern front threatened by Russia”.

Immediately after the NATO Neptune Strike ’22, the exercise Mission Clemenceau 22 will take place in February. It will involve, in an “Operation of three aircraft carriers”, the French nuclear-powered Charles de Gaulle with its battle group, including a nuclear attack submarine, which will enter the Adriatic; the Harry Truman with its battle group and the Italian aircraft carrier Cavour with the F-35 on board. This exercise, of course, is also directed against Russia.

While NATO enjoins Russia to “de-escalate”, warning that “any further aggression will involve a high cost for Moscow”, the foreign ministers of the European Union – meeting in Brussels and connected by teleconference with the US Secretary of State Blinken – have decreed yesterday other measures against Russia.

The European Union of 27, of which 21 belong to NATO under US command, echoes NATO’s warning to Russia, declaring that “any further military aggression against Ukraine would have very serious consequences for Russia”. In this way the EU participates in the strategy of tension, through which the U.S. create fractures in Europe to keep it under their influence.