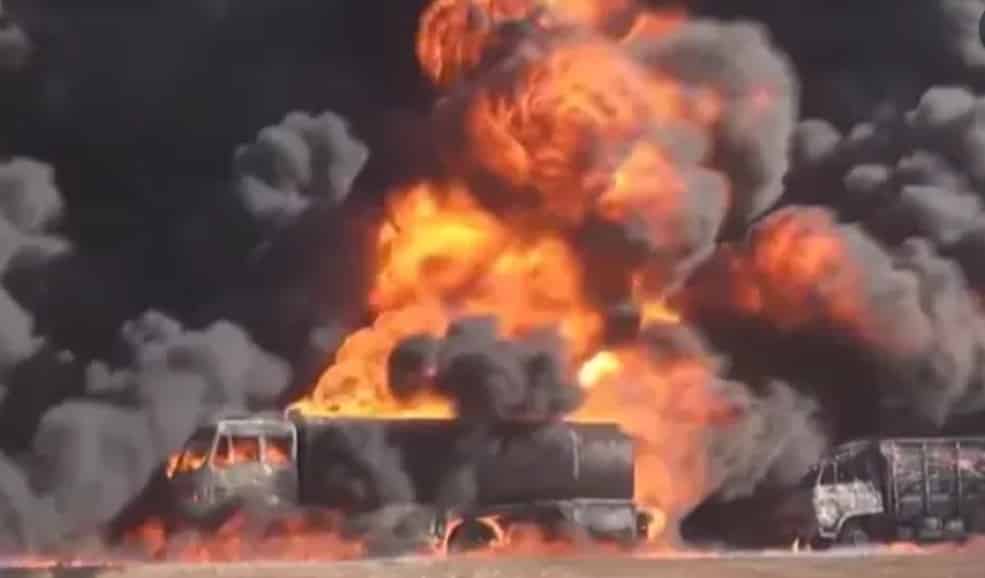 By Claudio Resta for VT

How can Biden in these days be so sure of a future Russian invasion of Ukraina in February inspite of both Russian and Ukrainan denials about it? That is the big question and if I can I would suspect him of bad faith.

Isn’t he maybe planning of a US covert but officially false Ukrainan flag provocation on its Russian border?

Something that for the jus ad bellum must request a Russian military response.

So that NATO or maybe, who knows, a Multi National Coalition of the Willing, in this case would recognize that they morally “have” the duty to intervene against Russia to protect Ukraina and EU borders.

This hypotesis if real would be an astonishing criminal act, yet pretty realistic, that you may imagine at present.

Such an eventuality would be in the current geopolitical context very dangerous at the risk of being the exploder of a New World War just as the assassination of Archduke Franz Ferdinand of Austria in Sarajevo on the 28th of June 1914 was the detonator of WWI.

The wise foresight of ancient Diplomacy until mid-twentyeth century foresaw the exsistence of Buffer States lying between two rival or potential hostile great powers. Buffer States, were independent, and typically pursuing a neutralist foreign policy. Its existence was conceived to prevent conflict between great powers and their alliances.

On the other side the un-wise politics of present contemporary Diplomacy eliminated Buffer States.

In the sense that the former Buffer States more recently took sides on one side or other opposite great powers and/or their alliances.

So Countries like Sweden, Belgium, Switzerland and Austria among others aren’t anymore Buffer States as they used to (since they took the side of the West). And the World became a much more unstable and dangerous place at risk of a war.

I understand that there are many aspects on the social, economical and political side that may historically turn a former kind of Buffer State (independent, neutral and not aligned) through a free and democratic process in a type of it (West aligned, for instance, seldom East aligned).

Yet most of these aspects, even the cultural ones, are mainly driven by Imperial Superpowers (USA, Russia, PRC, even still UK, sometimes) even if often in a non explicitly declared, hidden and covert way.

So some Buffer States, like some European ones come from a long and complex history, in which sometimes after the end of WWII they were Eastern Satellite ones or even have a longer history of being part of Russian Empire then USSR that after the end of Soviet Union autodeterminated to became independent and neutral, and then after few years decided to be fully members allied of the West.

Different cases with different histories like those of Baltic Republics different from Ukraine and others.

Anyway, as I was saying before the process that turns a former kind of Buffer State (independent, neutral and not aligned) in a type of it (West aligned, for instance, seldom East aligned) is much more exogenous than endogenous.

The exogenous instruments used by an Imperial Superpower are economic recovery programs, propaganda, psyops, and sometimes even covert criminal acts performed by Security Agencies, such as oppositors killings even if political leaders.

Everything that can be useful to the manufacturing of consent that was mainly driven by Imperial Superpower, yet but also partly democratically confirmed by their people.

Propaganda is working from the continuous repetition of the assertion that the West that is more “free”, richer, happier, and more qualified among others (as a peer and equal opportunities, feminist, etcetera), and “always” better than the East.

The most powerful instrument of this politics aimed at building a positive image of the West was Hollywood, with its masterful mix of art and propaganda, plus all the western mainstream media conglomerates.

The 1965 motion pictures Doctor Zhivago, for instance, is a great work of art, a movie masterpiece, an historical epic romance but yet a very effective work of propaganda critical of the Russian Revolution and Soviet Union.

Most war movies behind the action hide patriotic propaganda, and western too.

Then PsyOps were functional to the manufacturing of consent in Sweden, and also the killing of non aligned leaders even in Western Countries such as Olof Palme and Aldo Moro, for whose deaths the principal suspect are US labelled (see NATO secret armies, and Strategy of tension in Italy around Seventies).

Not to mention a few years before Enrico Mattei and probably also Adriano Olivetti in Italy at the beginning of sixties just like Swedish UN Secretary Dag Hammarskjöld, and especially obviously JFK, MLK and Bob Kennedy all along the sixties, whose deaths share the same principal, US Deep State.

They all were heroes of freedom and democracy in their Countries and for the world and so were obstacles to the plan for the destruction or at least non-existence of Non Aligned Countries, Buffer States and Peace, after all for those who pursued this evil project.

I guess I know the reason why present contemporary Diplomacy eliminated the existence of real Buffer States.

That is because “war is a racket” as General Smedley D. Butler used to say. A top ranking level professional expert of this subject with much more knowledge and experience of me and the most of the people and also a man with a very  open and free mind, too. An extremely rare good today.

And, since Buffer States are not useful, functional to the economy of racket of war, they were eliminated, by present contemporary Diplomacy in the sake of this racket.

Dagens Nyheter (Swedish newspaper) article by Olle Alsen,(journalist) US President Ronald Reagan assistant, Barbara Honegger and writer of October Surprise, book whose author is Barbara Honegger and not the one with the same title by Gary Sick, stating that Italian P2 freemason master Licio Gelli and CIA puppet on February, 28th, 1986 announced the killing of Palme