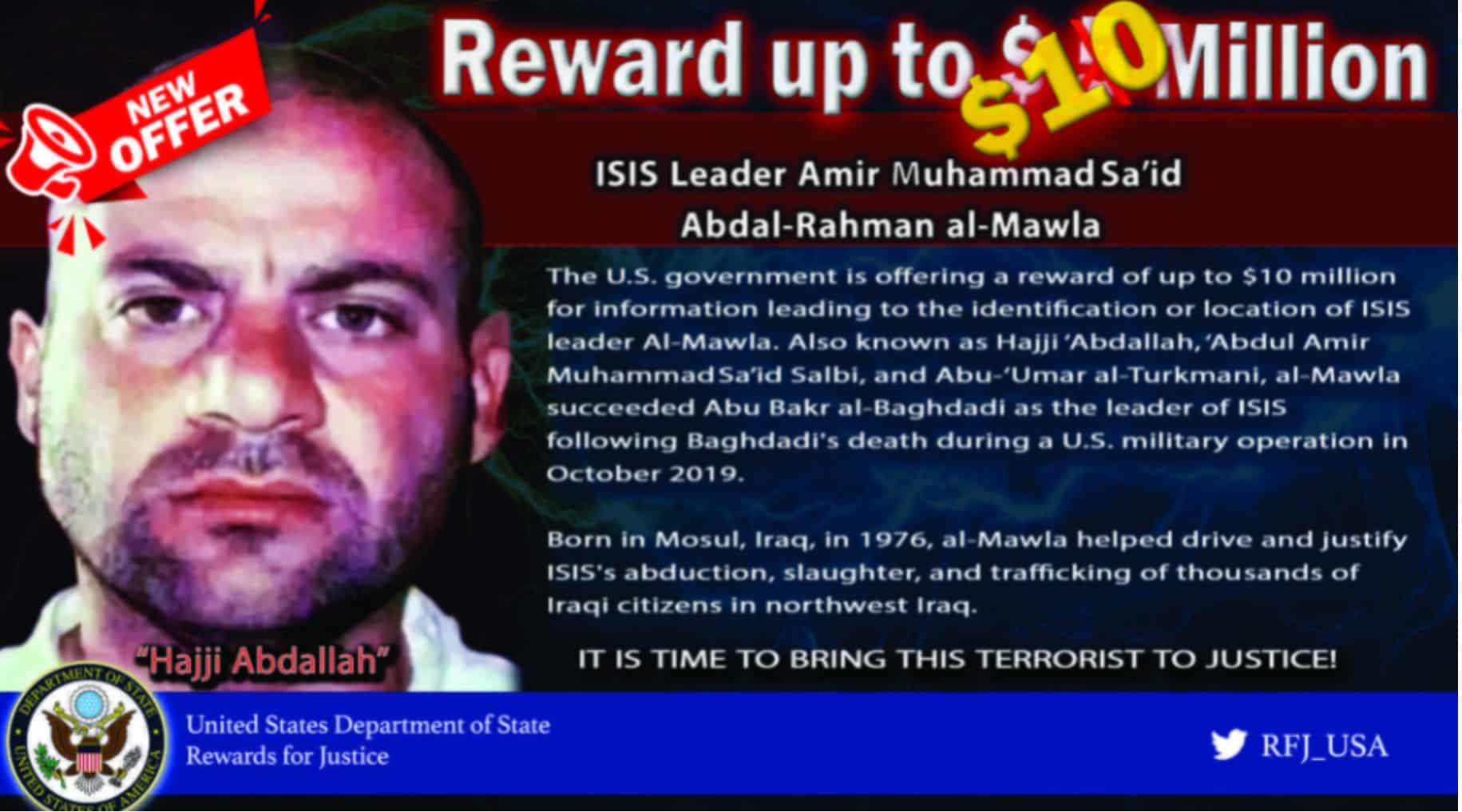 RT: Before the US announced that Abu Ibrahim al-Hashimi al-Qurayshi was “taken off the battlefield,” some speculated that the Islamic State (IS, formerly ISIS) leader didn’t even exist. Here’s what we know about the terrorist chief, and the US operation that “removed”  him.

A man of mystery

Abu Ibrahim al-Hashimi al-Qurayshi was appointed leader of IS in 2019, after the terrorist group’s notorious boss, Abu Bakr al-Baghdadi, was killed in a raid by US special forces ordered by then-President Donald Trump. Al-Qurayshi was said to be an Iraqi of Turkmen descent and reportedly served as an officer in Saddam Hussein’s army, joining Al-Qaeda after the US military toppled Saddam’s government in 2003.

After an unknown period of detention by the US in Iraq, al-Qurayshi disappeared into the jihadist underworld. It is assumed that al-Qurayshi pledged allegiance to the future IS leader, al-Baghdadi, after they were both detained by the US forces.

Al-Qurayshi, born Amir Mohammed Abdul Rahman al-Mawli al-Salbi, has a list of around two dozen other names, nicknames, and aliases, according to the Counter Extremism Project. However, little is known about his activities between his release and appointment as IS leader in 2019. Voice of America reported in 2019 that “there are even doubts that the man… exists at all.”

However, it is believed that al-Qurayshi served as al-Baghdadi’s top lieutenant, and that he ordered the group’s fighters to assault and enslave Iraq’s Yazidi minority in 2015.

Al-Baghdadi’s death was seen by many as the final nail in IS’ coffin. While the group once controlled enormous swathes of Iraq and Syria, all of its territorial gains made since 2014 had been rolled back by the Syrian military and its Russian and Iranian allies, by US-sponsored opposition forces in Syria, and by a US and coalition air campaign. IS by late 2019 controlled only a few pockets of land in Syria, and was no longer ordering regular terrorist attacks on the streets of Europe.

However, the Pentagon and State Department judged in 2020 that IS under al-Qurayshi was mounting a resurgence following a spike in attacks, and the group’s new leader was labeled a Specially Designated Global Terrorist that March. The State Department had offered a $5 million reward for his capture in mid-2019, and this bounty was bumped up to $10 million in 2020.

Then-Secretary of State Mike Pompeo said that the reward was doubled due to the fact that al-Qurayshi “helped drive and justify the abduction, slaughter, and trafficking of the Yazidi religious minority in northwest Iraq and also led some of the group’s global terrorist operations.

US President Joe Biden announced on February 3 that al-Qurayshi had been killed in a “counterterrorism operation” in Idlib province, northwestern Syria, the night before. Locals told AP that the operation, which targeted a house, involved multiple helicopters, and that explosions and machine gun fire were heard.

An aerial view of wreckage around the site of an operation by US forces in Idlib, Syria, February 3, 2022 © Getty Images / Izzeddin Kasim

The IS leader killed himself by detonating a suicide vest as the Americans closed in, a US official told AFP and Axios. “At the beginning of the operation the terrorist target exploded a bomb that killed him and members of his own family, including women and children,” Axios quoted the source as saying.

While no Americans were harmed in the raid, multiple civilian casualties were reported, with Al-Jazeera claiming that seven children and three women were among at least a dozen bodies. UNICEF confirmed that at least six children were killed and another injured, and that “civilian-populated areas were severely damaged.”

What’s going on in Idlib?

Al-Qurayshi and al-Baghdadi were both killed by the US in Idlib, a province in northwestern Syria bordering Turkey. The province has been bitterly contested throughout the Syrian Civil war, with Syrian government forces and Turkish-backed opposition fighters vying for control. Idlib is currently controlled by opposition groups, and is one of the few relatively safe havens remaining for IS members like al-Qurayshi.

What’s next for IS?

While IS has seen its territory retaken, its members driven underground, and its second leader in less than three years killed by the US, the group is still capable of mounting opportunistic attacks. Less than two weeks ago the group attacked a prison in Hasaka in northeastern Syria run by the US-backed Syrian Democratic Forces (SDF), a Kurdish militia.

The battle for the prison killed hundreds of people, and the facility was only retaken after more than a week with the help of American troops.“If their attack had succeeded, they would have attacked other neighborhoods in al-Hasaka as well, in conjunction with the attacks on the areas of al-Hol, al-Shadada, and Deir el-Zour, to put their extensive scheme into effect,” the SDF said in a statement after the prison was retaken.

“They wanted to launch a large-scale attack on the area to spread once again their terrorism,” the statement continued, claiming that the prison attack was IS’ first step toward establishing a “Second Islamic State.”

Western officials, however, are doubtful. “I think that highly unlikely,” a counterterrorism official told Voice of America. “The local conditions do not currently exist for resurgence,”  he added, while a different US official said that despite making “incremental improvements,” IS remains committed to “long-term goals” of consolidating power in Iraq and Syria.