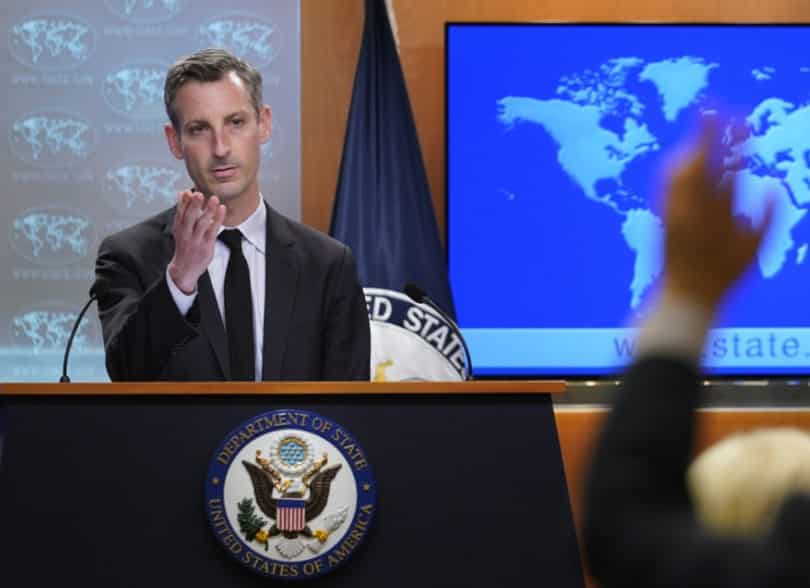 Critics have accused the US of trying to “have it both ways,” by supporting Amnesty’s claims of abuse, but only against countries the US has “significant policy differences” with.

In an interesting exchange, @APDiploWriter pushes @StateDeptSpox on why the US is so critical of @Amnesty reports about Israel when it relies heavily on the group's findings that uncover human rights abuses elsewhere around the world. pic.twitter.com/X6X8RQsLG1

Published on Tuesday, Amnesty’s report explicitly describes Israel’s policies toward Palestinians – which involve forced evictions, unlawful killings, and severe restrictions on movement and freedom – as “an institutionalized regime of oppression and domination of the Palestinian population for the benefit of Jewish Israelis–a system of apartheid.”

The US State Department rejected the report, as did more than a dozen Jewish and pro-Israel members of Congress. “I think that it is important, as the world’s only Jewish state, that the Jewish people must not be denied their right to self-determination, and we must ensure there isn’t a double standard being applied,” Price told reporters at a State Department press conference on Tuesday.

However, Lee accused Price of applying a double standard. Pointing out that the State Department’s last human rights report cited Amnesty International’s research on alleged abuse in China, Cuba, Iran, and Syria, Lee asked “Why is it that all criticism of Israel from these groups is almost always rejected by the United States and yet accepted, welcomed, and endorsed when the criticism is of other countries, notably countries with which you have significant policy differences?”

“This is about our vehement disagreement with a certain finding,” Price replied. “We cite outside groups in our own reports… but I don’t think you’re going to find any citation… that says ‘the department agrees… with absolutely everything in this report.’”

Apartheid claims reflect how public opinion is changing on Israel

The report has also been dismissed by the UK and by Israel itself. The Israeli Foreign Ministry accused Amnesty of stoking “antisemitism,” with Foreign Minister Yair Lapid saying that it “quotes lies spread by terrorist organizations.”

Support for Israel is bipartisan in Washington, but this consistently pro-Israel stance has been criticized, even from other Jewish groups.

Reacting to Lee and Price’s exchange, Jewish Current’s editor Peter Beinart remarked that “the US and American Jewish establishment can’t have it both ways… you can’t savage Amnesty International’s and Human Rights Watch’s work on Israel-Palestine without undermining their work everywhere else.

In Israel, a collection of human rights and pro-Palestinian groups expressed their support for Amnesty’s report. “We wholeheartedly reject the idea that Amnesty International’s report is baseless, singles out Israel, or displays antisemitic animus,” they wrote, calling the Israel government’s charges of antisemitism “spurious.”