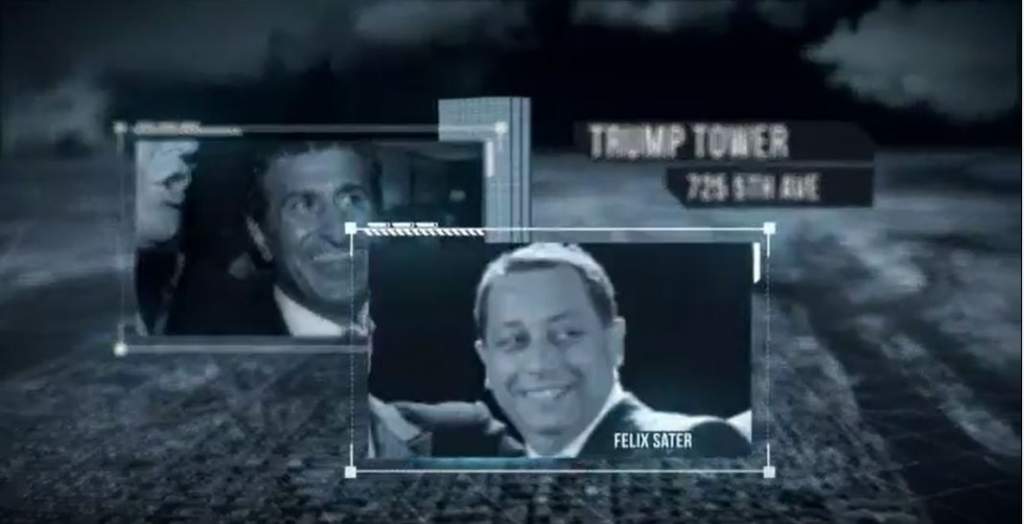 From May 13, 2017: Followup to: ISIS, the Mob and Trump, More History than we knew. As we have been closely examining the Russian mafia ties of the Trump administration, Felix Sater (Sheferovsky) keeps coming up.

The film below describes Sater as known by the FBI to be a “Syndicate crime boss for Simeon Mogilevich Moscow organized crime family.” Sater’s father Michael Sheferovsky worked for Mogilevich, one of the top ten of the FBI most wanted.

Three of Mogilevich’s syndicate members lived at Trump tower. Sater’s father was arrested for extortion, for forcing Brooklyn entrepreneurs to pay him. In 1991, Sater stabbed someone with margarita glass in a bar fight. Later, he becomes involved in financial fraud pumping penny stocks.

According to the film, “Sater works together with a group of mafia members, driving up shares, by providing false information. The FBI traces him, but Sater flees to Russia, when he returns to NY he still stands trial.

“But then something strange happens.

“He is basically on the verge of pleading guilty to those offenses, Sater closes a deal and becomes an FBI informant. He avoids punishment by turning on his accomplices.”

However, there is more to the story. The very basis of how and why Sater was able to avoid prosecution, and that lies in the Federal court system. Sater’s cooperation allowed for the “the illegal concealment of his racketeering conviction to evade millions of dollars of mandatory restitution he owed to the victims of his organized crime stock fraud. By itself this is no surprise, as it occurred in the Eastern District of New York, home to Jordan Belfort, the ‘Wolf of Wall Street,’ and other cooperators who, like Sater, got to keep the money and live in luxury while their victims were left to rot,[2]” according to Law 360.

“But what hasn’t been explained before is that Sater also used — and was allowed by the government to use — the concealment of his conviction to fraudulently induce banks, partners and investors into parting with nearly a billion dollars to finance Trump-branded projects which, if successful, would have paid the Trump Organization a hundred million dollars and laundered a quarter billion dollars of the share of profits expected by Bayrock Group LLC (Sater’s company) outside of the country to evade taxation.[3]

“Much of the fraud took place between 2003 and 2010, with the chargeable knowledge and facilitation of Loretta Lynch, now U.S. Attorney General;[4] Leslie Caldwell, now Assistant U.S. Attorney General for the Criminal Division; and her now designated second-in-command Marshall Miller, all of whom came out of the EDNY U.S. Attorney’s Office,[5] and with the knowledge and facilitation of the federal judges of the Eastern and Southern Districts of New York and the Court of Appeals for the Second Circuit.

“It’s bad enough that Sater and others acting with him committed — and were allowed to commit — hundreds of millions of dollars of bank, real estate, mail, wire and tax fraud, and money laundering and extortion as a reward for his ostensible cooperation in other cases.

“How much worse is it that, even after 2010, by which time the government admits Sater’s usefulness as a cooperator had ended, he was allowed to continue to get away with it, insofar as the author, his client, his client’s clients, and others who learned the truth of all this almost six years ago have been threatened ever since with criminal prosecution if we tell anyone what we learned, even though we learned it lawfully, from private records Sater had kept at his firm and then abandoned when he left, and from public records which couldn’t be made to disappear because they were in the custody of Congress?

According to the documentary above,  ZEMBLA – The dubious friends of Donald Trump: the Russians, it was rumored that Sater helped American intelligence services by providing information on Stinger missiles being sold to the Taliban, so the American government agreed to cover up court transcripts about the fraud.

Sater then later appears as Managing Director of Bayrock, while banks and investors do not find out about his criminal past and connections to the Russian mafia.

Former Bayrock Attorney Fred Oberlander at the 20 minute mark of the video says that by keeping Sater’s past a secret, Bayrock committed a felony. “It isn’t legal to run a business where you hide the fact that where one of the biggest owners is a convicted mobster. The maximum jail term would be 30 years.”

Unless, of course this is routine practice of the courts, concealing criminal proceedings in exchange for cooperation, as is the case with Sater.

Bayrock knew in 2007 about Sater’s criminal activity and confirmed in emails sited in the film. The legal council at the time wrote about “the risk that Felix’s past would be uncovered.” The legal council also wanted Sater’s name removed from  corporate documents.

Threats of Exposure Are More than on Paper

Law 360 experienced threats that may be common place when confronting members of the Russian mafia that have been given a pass for “cooperation” by the courts. Threats from the individuals themselves also extend to those who seek to out them.

Oberlander said that he is being threatened by Saters associates as well.

The film discloses that an investor in a Bayrock project who accused the company of embezzlement was also threatened. “He swears that Sater has threatened to administer electric shocks to his genitalia, to cut off his legs and to leave his dead body in the trunk of his car.”

Now is that someone our courts should be protecting?

From Law 360: “In sum, for years Trump partnered with Sater, through The Trump Organization and Bayrock Group LLC, respectively, while Sater, a secretly convicted racketeer, used the illegal concealment of his record to defraud banks into financing Trump projects, from which Trump would have taken enormous sums and the U.S. Treasury would have been defrauded of like amount by profits laundered overseas. The crimes committed, then covered up, are staggering. Take one example: Trump SoHo, a monument to organized criminal activity protected by federal courts and attorneys even though:

So why are the courts covering up for “organized criminals and billion-dollar frauds, let alone by using illegal secrecy and threats of prosecution against this author and his client?

According to Law 360, “One answer is, it’s the result of concerted efforts of Second Circuit courts and prosecutors to protect their decades-long operation of a covert criminal justice system of secret dockets, hidden convictions, and protected cooperators allowed to commit crime with impunity, so long as they earn their keep.”