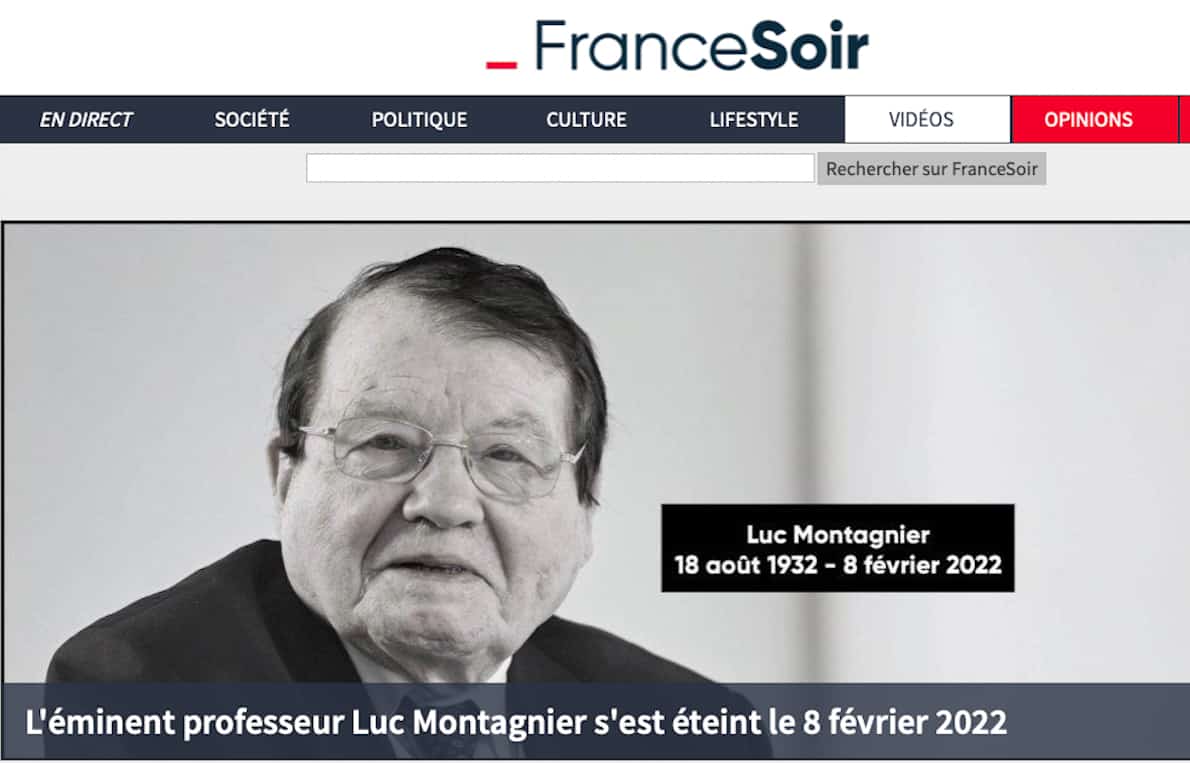 While the French newspapers continue to surprisingly ignore the news of the death of professor Luc Montagnier and the Italian ones report it in dubious terms as a true mystery, France Soir has relaunched another Tweet stigmatizing the silence of the media and politicians on the disappearance of Montagnier.

“Faced with the appalling silence of the media and the political class after the death of Professor Montagnier, the Nobel Prize for Medicine @france_soir and @ BonsensOrg are calling for a day of national mourning in memory of this great French scientist of international fame”.

Difficult to understand how but they killed another one! It is the only shocked comment we can add to the sudden death of Luc Montagnier, winner of the Nobel Prize for Medicine in 2008 for the discovery of that HIV which he found traces in SARS-Cov-2 confirming the research that 9 biological Indians were forced to retract.

The death of him, initially disseminated by various media in the midst of a flurry of denials, was confirmed by France Soir who had also given space to the French virologist’s accusations about the artificial origin of the Covid-19 pandemic virus.

“At the age of 89 (August 18, 1932 – February 8, 2022), Professor Luc Montagnier died at the American hospital in Neuilly-sur-Seine. Doctor Gérard Guillaume, one of his most faithful collaborators, tells us that he left in peace, surrounded by his children” writes France Soir referring to the hospital in the municipality of Hauts-de-Seine, a region bordering the city of Paris .

He was emeritus director of the “Center national de la recherche scientifique” and of the Viral Oncology Unit of the Pasteur Institute in Paris where in 1983, together with Françoise Barré-Sinoussi, he discovered the HIV virus. The scientific achievement earned the two the Nobel Prize for Medicine in 2008.

His death took place on Tuesday 8 February, on the same day as the funeral of the Italian biologist Franco Trinca struck down by a very violent and suspicious form of Covid-19 despite being in excellent health and used to take care of himself with a thousand precautions.

Trinca had often taken up the complaints of the internationally renowned French scientist who, having worked in the field of vaccines, had denounced the dangers of gene serums based on messenger RNA above all for the risk of creating degenerative brain diseases from prions, as highlighted in our latest investigation.

Italian Biologist NO VAX Killed by a Very Lethal and Suspect Covid. After Contacts with Prosecutors on Therapies Ignored by Govt

“He was a biologist and virologist, but also and above all a man of remarkable intelligence, who lived for science. In addition to being named Nobel Prize in Medicine in 2008 for the discovery of the HIV virus, during his life he worked alongside the largest scientific institutes in the world. Research director emeritus at CNRS, professor at Institut Pasteur, director of the Center for Molecular and Cellular Biology at Queens College of the City University of New York, director of a research institute at Jiao-tong University in Shanghai. He has supported the Academy of Sciences and the National Academy of Medicine for many years through his search for him. For this he has received countless prizes and awards” adds France Soir.

Despite his advanced age and despite all the criticisms suffered in the autumn of his life, especially from the scientific community, Luc Montagnier has always fought for free science. “We were lucky enough to be able to welcome him several times at France Soir and we would like to do him all the honors that are due to him” concluded France Soir.

Precisely for this reason, there was no problem in publicly supporting the thesis of the SARS-Cov-2 virus of artificial origin, later confirmed by the French bio-engineer Pierre Bricage in another research and recently by the American colonel Lawrence Sellin, already in force in the military Biological Laboratories of Fort Detrick (Maryland) which revealed in detail the project rejected by DARPA (the Defense Advanced Research Projects Agency of the Pentagon) because it was too dangerous. We will see in WuhanGates 47 where was continued.

“Vaccinating in a pandemic is a weapon of mass destruction,” declared Montagnier echoing fellow Belgian virologist Geert Vanden Bossche who worked itch for Bill Gates’ Gavi Alliance except to leave for a fight over one of the vaccines for global immunization.

As already highlighted in a previous WuhanGates 34 investigation those virologists who come too close to the SARS truth mysteriously die from sudden diseases often justifiable by age. The inexplicable suicide of Giuseppe De Donnowas not, deprived of the possibility of making a protocol of his treatment on hyper-immune plasma due to an intervention by Big Pharma always close to Gates.

Montagnier’s accusations about the dangerousness of experimental gene sera reached a climax during a very recent appearance in the parliament of the Lussumbergo for a conference of a No Vax association.

In this circumstance he explained in detail the danger of the internal mechanism of the spike that could allow some elements of the vaccine to transform into prions, triggering a neurodegenerative disease of Creutzfeldt-Jakob (from which also derives the mad cow syndrome) and other diseases connected to these infectious protein nanoparticles (acronym Prion in English) which are rather particular infectious agents: they do not contain DNA or RNA and are completely different from viruses and bacteria.

The news has aroused such disbelief among millions and millions of his fans that despite the cover of France Soir in large letters after three hours there are still those who are not convinced that his death really happened. It is the first time in my journalistic career that I hope to have to deny a news I have just written…