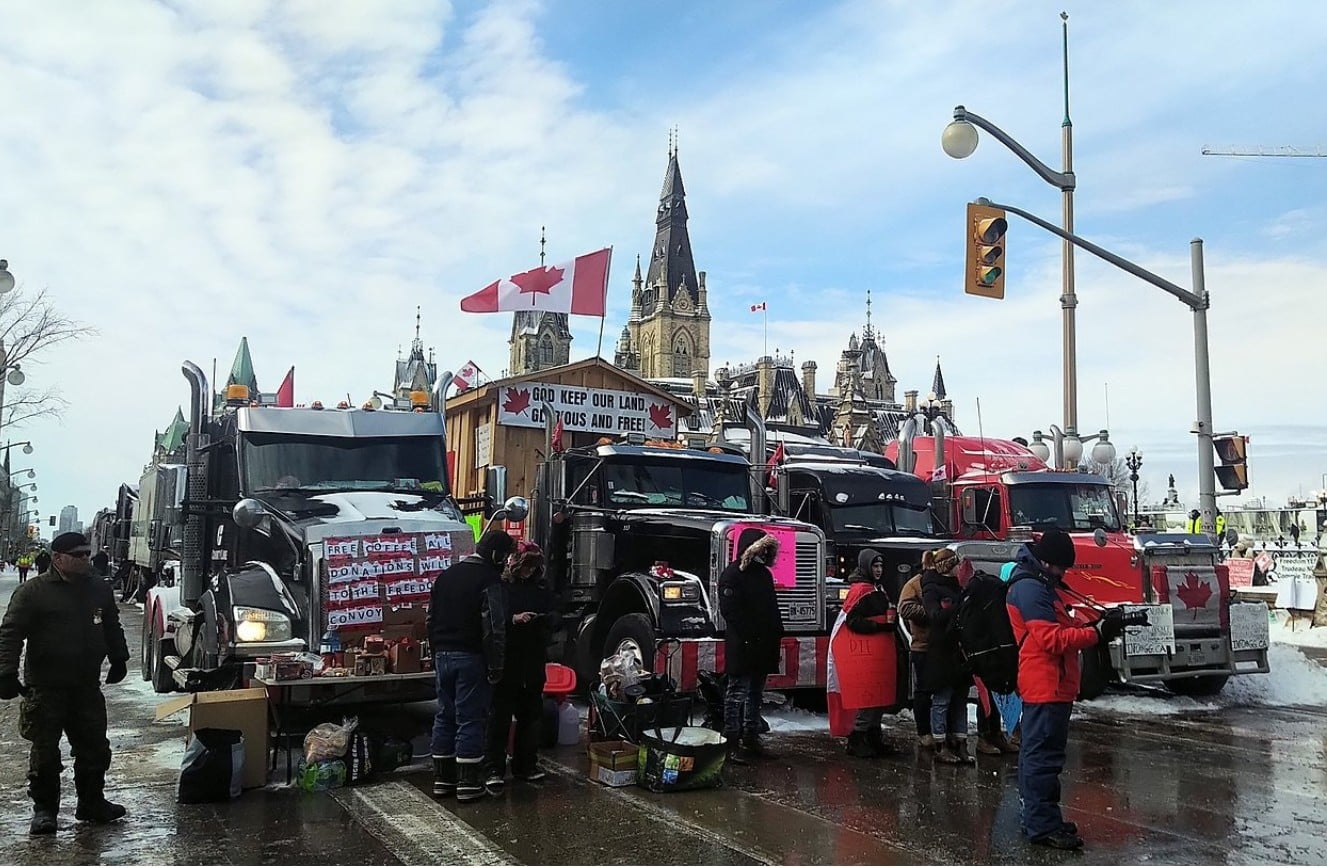 Ottawa, the capital of Canada, is a quaint city of about a million people—a little bigger than Jacksonville, Columbus, and Indianapolis, a little smaller than Dallas, San Diego, and Philadelphia, and about the same size as Austin, Texas. It sits on the southern banks of the Ottawa River, 125 miles from Montreal, 275 miles from Toronto, and just an hour’s drive to New York State.

The nature of those demands, like the contents of the packages in the boxes on some of those trucks, have shifted over time. What began as a quixotic call for the government to dissolve mutated into an insistence that Canada lift its mask and vaccine mandates (which are more stringent than ours . . . which explains why Canada’s covid death rate is so much lower).

None of those things was ever going to happen—they might as well have demanded the dissolution of the NHL or the renunciation of Rush—so the provocateurs did what provocateurs do: they provoked.

They blared their horns round the clock. They kept their big diesel engines idling for days and days without relent. They pissed on the national war memorial. They shat on the porches of houses in Ottawa’s nearby Gay Village. They waved Nazi flags and Confederate flags and Don’t Tread On Me flags. They blasted music. They crashed a homeless shelter, demanding food (!). They have behaved, as the Canadian journalist, author, and attorney Mark Bourrie tells me on today’s PREVAIL podcast, “with the arrogance of dumb people with money.” The Freedom Convoy, he says, is “Mouthbreather Woodstock.”

The provocateurs have created noise pollution. They have created air pollution. They have disturbed the peace of the residents who live in that part of the city—women in battered women shelters, students, homeless people in nearby shelters, residents of the Gay Village, low- and middle-income Canadians innocently living their lives. And for almost two full weeks, the police have done fuck-all to stop them.

This is what Donald Trump and Ted Cruz and Mike Flynn and Ben Shapiro and Elon Musk are supporting: angry, selfish white guys (you’re not gonna believe it, but the Freedom Convoy is mostly white guys) being complete dicks. Tucker Carlson, who called the cops when a small group of peaceful protestors spent 20 minutes outside his house with a single tambourine, is totally fine with truck horns blaring 24/7 for two straight weeks in front of somebody else’s home. This horribleness is what American dark money is underwriting.  Read more…