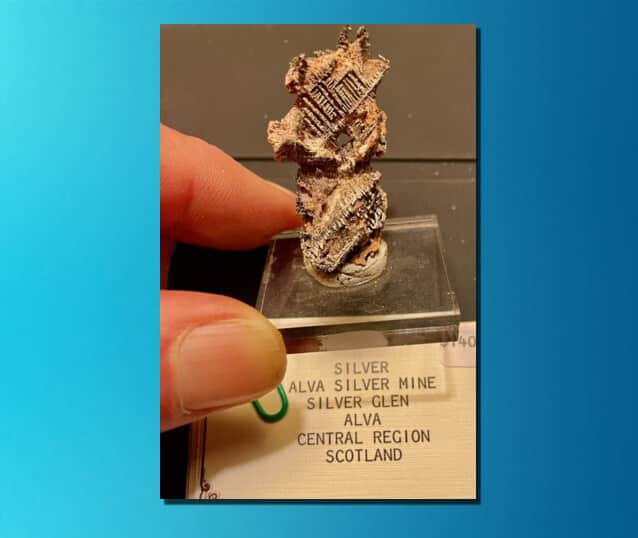 Specimens are more than molecular structures: tying a specimen to history. When I observe a mineral specimen, I first view it through a science prism – how was it formed, what does the particular crystal structure (or lack of) mean in terms of chemistry and thermodynamics, and what must the geologic processes have been that created the environment for the mineral formation?

…The small silver specimen shown here is a perfect example – I can tell from the crystal structure it likely came from a 5 metal deposit, and the small amount of matrix suggests the silver was deposited in a quartz vein in an andesite/rhyolite volcanic pile. But the real Eureka moment is to look at the label and see this is from an incredibly obscure locality that is tied to Scottish history.

The Alva mine was discovered in 1715 not far from Sterling…

… In 1688 the House of Stuart ruled all of England, Scotland and Ireland and James II was king. James was Catholic and ostensibly his ouster was driven by a Protestant elite, and in fact James was the last Catholic British King.

This begat a 100 years of various attempts to restore the House of Stuart by the Jacobites (from the latin name for James). Sir John Erskine was a principal leader of the Jacobite rebellion of 1715 – the very year that the Alva mine was discovered. The silver from this mine helped finance that uprising, although it was unsuccessful. A Mineralogic Record article by Stephen Moreton in 1996 details the history of intrigue of the mine – which is far larger than the actual amount of silver mined.

“This fascinating book tells the little known story of Scotland’s richest ever silver mine, near Alva in Clackmannanshire. Published by the National Museum of Scotland on behalf of the Clackmannanshire Field Studies Society. The research by author Stephen Moreton is based wholly on primary sources, the most relevant of which are reprinted within the book.

“The tale that emerges could have sprung from the imagination of a master story-teller like Robert Louis Stevenson. Silver was discovered at Alva on the lands of Sir John Erskine just as he joined the Jacobite cause in the 1715 uprising. Extraction was then carried on in secret under the direction of Catherine, Lady Erskine with the ore that emerged reburied for safety.

“After the uprising, Sir John Erskine tried to buy his way back into Hanoverian favour by offering to help the Crown exploit the silver mine: though it seems much of the best ore to emerge might have continued to be spirited away secretly under the noses of the Government. Bit part players included the chemist Joseph Black and eminent scientist Sir Isaac Newton.

“As a final twist, efforts to drive tunnels to help drain the mine later in the 1700s led to the discovery of a significant seam of cobalt, which soon became at least as important to the local economy as the silver had been.”