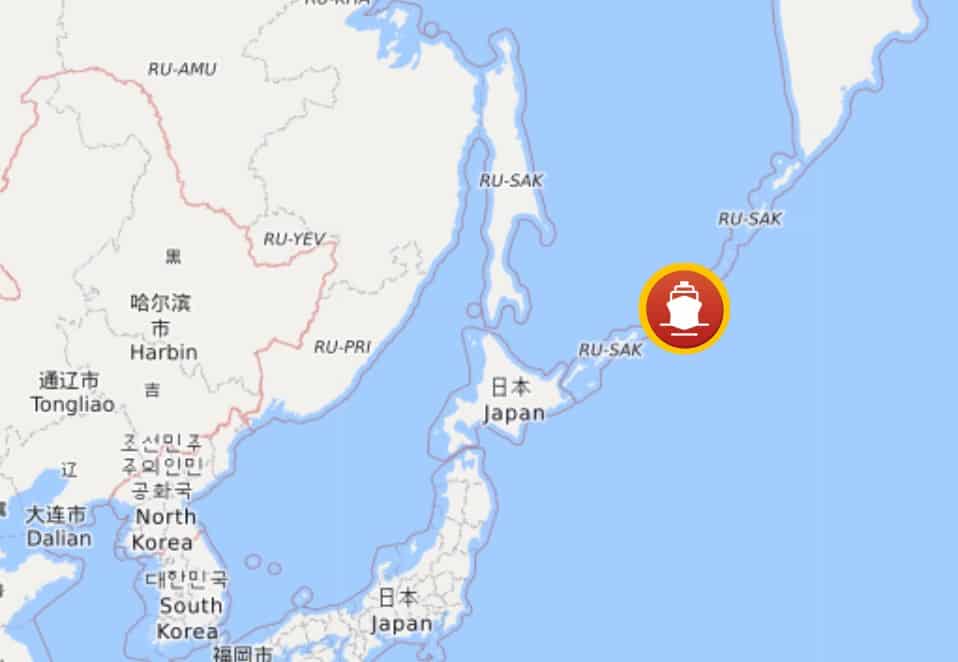 The crew of the submarine was given a message in Russian and English via underwater communication: “You are in the territorial waters of Russia. Surface immediately!”

Russia's defense ministry says it has summoned the US military attache in Moscow to protest a "breach of the Russian border" by a US submarine in the vicinity of the Kuril Islands. https://t.co/JLi1Chcx2c

“In accordance with the guidelines for the protection of the state border of the Russian Federation in the underwater environment, the crew of the Pacific Fleet frigate Marshal Shaposhnikov used appropriate means,” the message says.

The American submarine used a self-propelled simulator to double the target on radar and acoustic control means and left Russian territorial waters at maximum speed.

A Russian anti-submarine destroyer chased off a US submarine near the Kuril Islands to force it to leave the country's territorial waters, Moscow said Saturday, amid raging tensions over Ukraine. https://t.co/alxcXnt722

A detachment of ships of the Pacific Fleet continues exercises and controls the underwater environment to prevent violation of the state border.

In connection with the incident, the Defense Ministry called the military attache at the US Embassy in Moscow.

Russia says the incident occurred at 10:40 Moscow time near one of the Kuril Islands of #Urup. The Virginia-class submarine entered an area where the Russian Pacific Fleet was conducting its scheduled exercises.#US #Submarine #KurilIslands #Sputnik #Breaking #US #Russia pic.twitter.com/eH4zwKKAoI

According to the Avia.pro news agency, an American Virginia-class nuclear submarine was discovered today at 10.40 am Moscow time in the Pacific Fleet exercise area off the Kuril island of Urup. How exactly a foreign submarine managed to successfully pass Russian warships, including those equipped with special equipment, remains to be seen, however, despite the fact that the submarine was found in Russian waters, the latter managed to successfully evade Russian warships.

“On February 2022, 10.40 at XNUMX (Moscow time) in the area of ​​​​the planned exercise of the forces of the Pacific Fleet in the territorial waters of the Russian Federation near the island of Urup of the Kuril ridge, a US Navy submarine of the Virginia type was discovered.

A message was transmitted to the crew of the submarine in Russian and English in the underwater communication mode: “You are in the territorial waters of Russia. Come up immediately!” The demand of the Russian side was ignored. “In accordance with the guidelines for the protection of the state border of the Russian Federation in the underwater environment, the crew of the frigate of the Pacific Fleet “Marshal Shaposhnikov” used appropriate means”, – representatives of the Russian Defense Ministry said.

Sources specify that the American submarine, despite the presence of Russian warships, managed to successfully evade persecution – special equipment was used that made it possible to hide the real direction of movement of the nuclear submarine.

According to the Russian Defence Ministry, the submarine first ignored Russia’s warning but then left the country’s territorial waters.
A US submarine was discovered in Russian territorial waters near the Kuril Islands on Saturday, the Russian Defence Ministry said.
Russia says the incident occurred at 10:40 Moscow time near one of the Kuril Islands of Urup. The Virginia-class submarine entered an area where the Russian Pacific Fleet was conducting its scheduled exercises.
According to the ministry, the submarine was addressed both in Russian and English and was urged to immediately come up to the surface – but the warning was ignored. Then, in line with the guidance about the underwater protection of the borders, the crew of the Russian “Marshall Shaposhnikov” frigate used “relevant methods.” The submarine left the area quickly, the ministry added.
The Russian Defence Ministry has summoned the US military attache.
“A defence attache with the US Embassy in Moscow was summoned to the Russian Defense Ministry because a US Navy submarine has violated a Russian border,” the ministry said in a statement.
The incident comes as tensions threaten to boil over between Moscow and NATO over European security and Western speculation about Russia’s alleged plans to invade Ukraine. Moscow has repeatedly said that it does not plan to attack any country and stressed that the West’s persistence in hyping the “Russian threat” rhetoric only hampers diplomatic efforts to avoid further escalation.