Feature Image: Her Name was Kristina – Mother and baby killed in a Donbas park by random shelling from the US backed Maidan Coup Ukraine forces that killed many innocent civilans with few tears shed here. This photo became famous for its savagery, and the family did not object to its distribution. They wanted people to see it, and I have honored their wishes…JD

War in Eastern Europe: From Hypothesis to Reality

…from Southfront, which some US entities consider to be a Russian tainted platform, possibly similar to some US or Israeli tainted sources

Editor’s Note: This is the best wrapup for the week I have seen on the Ukraine ‘situation’. I don’t really know what else to call it. I can’t remember a more hyped up war since Saddam and Gaddafi. 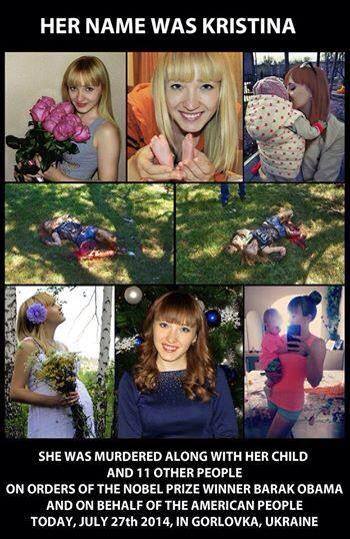 I have not seen a word mentioned in the press as to how many Russian military exercises have been held on the Ukraine border in the last ten years. I suspect some Russians fought in Donbas against the Kiev Coup Ukies, but they might have been from Donbas and had family there.

Cutting to the nitty gritty, if the Minsk Agreement had been followed through, we would not have had the Donbas perimeter being shelled for many years now, with no public admonition from even the Normandy process countries as to Ukraine’s failure to complete the agreement.

That said, why should they? The West kept Ukraine as a convenient scab to scratch to generate some Russia bad press.

US money poured in, feeding the graft there. Weapons, ammo and training prompted killing people in Donbas, not including the steady assassinations of its war heroes.

No “Don’t Cry for Me Donbas” play ever made it to Broadway. The West, Germany and France abandoned their effort to forge a peace. I suspect that did not happen because they preferred to keep Moscow in the doghouse as a scapegoat.

It’s been obvious to anyone who wants to see it that NATO wants to do a slow waltz up to the Russian border at a pace that won’t trigger a full scale war so it can be portrayed as Putin’s fault.

Western media has ignored the obviously true position below that only a Ukrainian attack on Donbas would trigger the Russians going in to protect the ethnic Russian people there. The US might do the same for Americans, but US media will not utter a word about that.

So the Western grandstanding will go on, as the main players love seeing their names in the news all the time. They will be sad when it is over; and if a big mistake is made, Kiev could be the most sad when it is over, and very possibly a victim of its own alleged protectors and poor judgement… Jim W. Dean ]

The weekend February 12-13 marked another escalation in Russian-Western relations amid the Ukrainian crisis. In fact, the U.S. supported by their allies in Europe and worldwide inflamed new wave of hysteria in the media through the same old means. The Anglo-Saxons are doing their best to increase tensions.

The Pentagon also decided to withdraw military instructors who were engaged in the training of the Armed Forces of Ukraine.

The UK resorted to the same appeals, clarifying that no evacuation of citizens who will remain in Ukraine will be organized. Meanwhile, KLM Airline suspended flights to Ukraine.

Dozens of other countries followed the example, including Japan, Israel, Germany, Kuwait, Latvia, Belgium, Finland etc. British military instructors should leave Ukraine on February 12 and 13, the UK Ministry of Defense reported. The Israeli military is on high alert in case it is necessary to evacuate Israelis from Ukraine.

Serbia ordered 10 thousand tons of salt, 1 thousand tons of beans and peas, as well as 30 thousand tons of milk powder, preparing to the Russian invasion of Ukraine, said the President of the republic Alexander Vucic. According to him, the country plans to stock up on petroleum products, but it is necessary to find funds for this.

The diplomatic mission of the “aggressor” Russia continues its work in Ukraine and the Kremlin is in no hurry to evacuate Russian citizens. To enhance the effect, the exact dates of the Russian invasion were distributed by the media.

According to Politico, Biden considers the date of possible Russian aggression to be February 16, he reportedly said it at online talks with European leaders and NATO chief Jens Stoltenberg.

Blinken previously admitted that Russia could invade Ukraine at any time — including before the end of the Olympics in China, which will end on February 20. At the beginning of the year, the invasion was allegedly scheduled for January 20. On February 13, a new date began to appear, February 22, which was announced by some Ukrainian officials.

It turned out that only anonymous sources of Politico know the dates of the alleged invasion, but not the leaders of the countries that will be reportedly involved in war in the coming days.

Vladimir Zelensky claimed: “If you have additional information about the 100% invasion of the Russian Federation into Ukraine starting from the 16th, please share such information with us.”

Spokesperson for the Russian Ministry of Foreign Affairs Zakharova commented on the reports:

“For 2 months, the United States has been claiming Ukraine on a daily basis that Russia is about to attack. The President of Ukraine and representatives of the power bloc of this country have been saying for 2 months that they do not have such information, and now they are also asking those who are not indifferent to share data.

Apart from Bloomberg, Der Spiegel and unnamed American sources, no one has such information. But, apparently, until the ideological inspirers of the Maidan bring Ukraine to a complete collapse, they will not calm down. For 2 months they have been mocking common sense and the Ukrainian people, implementing another global provocative campaign.”

Russia concludes that the U.S. and the U.K. are aware of some military actions being prepared in Ukraine, the Russian Foreign Ministry said, implying possible provocations aimed to draw Russia into the war.

Even the MSM are already lost in their own claims and are reporting quite compromising messages.

Administration officials told CNN the disclosures have been carefully coordinated among the National Security Council, the intelligence community and other national security agencies.

Amid the ongoing hysteria, which is inflated by his own administration, Biden assume the role of “world savior” and calls the “terrible” Putin for talks.

The talks between the two presidents continued for about an hour.

Biden warned Putin that the “continuation of the invasion” (which has not even begun) will result in serious costs for Moscow and a weakening of Russia’s position, the White House said. The US President also called on his Russian counterpart for de-escalation and further diplomatic efforts.

The Kremlin said that very the same request was sent to Washington earlier. Active diplomatic cooperation continues at various levels.

A phone conversation on the Ukrainian crisis between Russian Foreign Minister Sergei Lavrov and his American counterpart, US Secretary of State Anthony Blinken also took place on February 12. Lavrov accused the United States of provoking the Ukrainian authorities to turn to the military solution of the “Donbass problem.” Blinken threatened his counterpart that Russia’s aggression would cause a “transatlantic” response.

Russia is also holding negotiations with other countries besides the United States.

There is no unanimity among the NATO member states. The current crisis widens the gap between the Anglo-Saxon axis and the leading continental powers of the EU

On February 12, Russian President Vladimir Putin and French leader Emmanuel Macron held phone talks. They discussed Russia’s security guarantees, speculation over the alleged invasion of Ukraine and the West’s unwillingness to bring Kiev to the implementation of the Minsk agreements.

The media, quoting French sources in the Champs-Elysees, reported that Paris saw no signs that President Putin was going to offence. Macron made the same statements after his recent visit to Moscow and 6-hour talks with Putin.

Russia disagrees with the claims of the United States and its allies, rejecting any plans of any unmotivated aggression against Ukraine. The Russian Foreign Ministry assured that they do consider a full-scale war between Russia and Ukraine unacceptable. The Secretary of the Security Council, Nikolai Patrushev, called the judgments about the threat to Ukraine “complete nonsense.”

“Russia has never been the first to attack anyone”- he said.

The Kremlin’s position in the negotiation process and its official rhetoric, which is constantly repeated in response to the all the provocations of the West, reveals that Russia is ready for any developments, including a military response to Ukraine and its Anglo-Saxon patrons.

Thus, despite the fact that the preliminary scheduled maneuvers of Russian warships in the Black Sea and joint military exercises in Belorussia became yet another topic in loud headlines in the MSM and yet another reason for accusations against Moscow, Russia demonstrated that no exercises on its territory as well as in its waters are not a sign of the upcoming attack on another state. However, they demonstrate the full combat readiness of the Russian military forces.

Russia may cross the Ukrainian border only in the case of massive aggression against the DPR or LPR, which could lead to numerous victims and the occupation of the republics’ territories in violation of the Minsk agreements.

The beginning of a full-scale war in Eastern Ukraine may benefit only overseas actors. Even in the neo-Ukrainian elite itself, there are few supporters of such a scenario.

At the same time, the influence of the Anglo-Saxon elites on European affairs is very significant. We must pay tribute to them, over the past decades they have managed to provide destructive influence over local political elites through bribery and blackmail.

In the afternoon of February 13, there were already signs of the UAF preparations for the upcoming ground operation in Eastern Ukraine. Ukrainian forces began to clear minefields on the frontlines in the Sakhanka-Kominternovo area, using the UR-77 Meteorit minesweeper systems.

Risks are growing as Zelensky seems to be psychologically unstable, who finds himself in a quite complicated political situation today. While the Anglo-Saxon allies put pressure on him from abroad, there is also pressure that he faces from his political rivals inside the country. For example, from the former President of Ukraine and famous oligarch Mr. Poroshenko, who returned to Kiev a month ago, when tensions began to speed up.

Zelensky, who appeared in public drugged more than once, may succumb to external influence and choose the path of war.

A provocation on the battlefield will cause a direct and large-scale response from Russia. Unfortunately, the armed conflict in Eastern Europe is turning from a hypothetical into a real one.