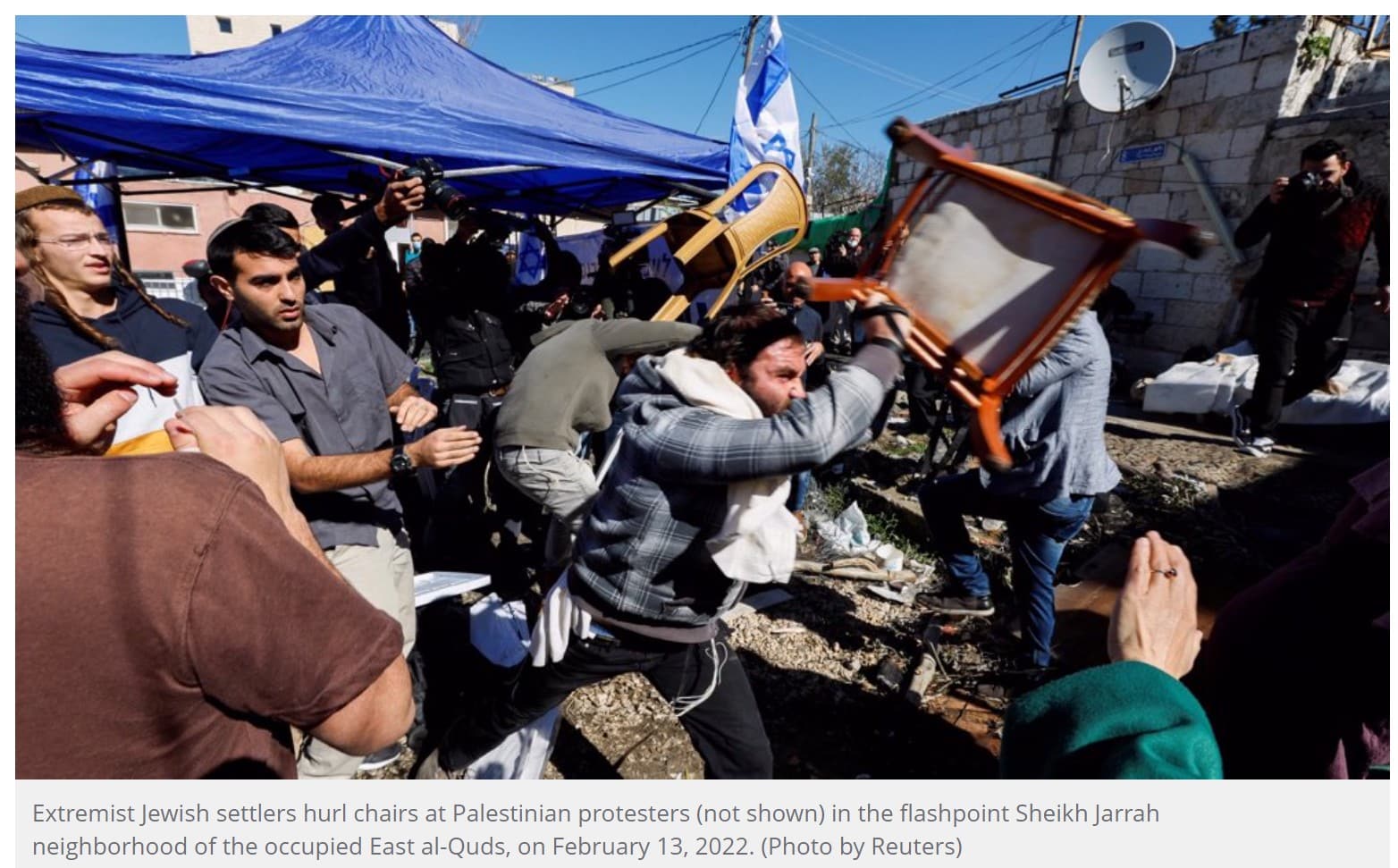 Press TV: The European Union has demanded an end to violent clashes between Israeli military forces and Palestinian residents of the occupied East al-Quds neighborhood of Sheikh Jarrah.

This comes after a controversial far-right Jewish lawmaker opened a parliamentary office there in what was described as an effort to exacerbate the situation in the tense district.

When will the EU finally impose sanctions on #ApartheidIsrael?https://t.co/uCh3yW4i6R

“Concerned about ongoing developments in Sheikh Jarrah, East al-Quds, with violent clashes leading to several injured and arrests. Incidents of settler violence, irresponsible provocations and other escalatory acts in this sensitive area only fuel further tensions & must cease,” the European Union Delegation to the Palestinians wrote in a post published on its Twitter page.

Scuffles broke out on Sunday as Itamar Ben Gvir of the far-right Religious Zionism alliance opened a parliamentary office in Sheikh Jarrah.

The Palestinian Ministry of Foreign Affairs and Expatriates condemned Ben Gvir’s step as a “provocative and escalating move that threatens to ignite violence.”

“What is happening in Sheikh Jarrah neighborhood is an official Israeli attempt to consolidate Judaization of the Holy City [of al-Quds]. It threatens to change the city’s existing historical, legal and demographic status to serve the narratives of the occupying regime and its colonial interests,” the ministry said in a statement.

The Palestinian foreign ministry then held the Israeli regime fully and directly responsible for the escalation in occupied al-Quds, and potentially dire consequences of the Palestinian-Israeli conflict.

It added that the failure of the international community and the UN Security Council to take necessary measures to compel Israel to stop its occupation of al-Quds encourages the occupying power to forge ahead with its colonial Judaization projects in the Holy City.

Earlier, Hamas resistance movement had issued a strongly-worded message of warning to the Israeli regime and settlers after the latter renewed their attacks on Palestinians in Sheikh Jarrah neighborhood.

Mohammed Hamadeh, a spokesman for the Gaza-based movement, said the attack “amounts to a clear violation and is playing with fire”.

“We warn the occupation (regime of Israel) of the consequences of continuing these attacks, which are similar to playing with explosives that will only explode in their own face,” Hamadeh noted.

The Hamas spokesman called on Palestinian people across the entire occupied territories, especially the holy city of al-Quds, to “mobilize” in support of their fellow countrymen in the face of the “savage occupiers” and “cowardly settlers.”

The clashes broke out as Israeli troops raided the village to tear down a home.

#BREAKING| A 17-year-old Palestinian boy has succumbed to his injuries that he sustained in the head by an Israeli gunfire during a violent military raid into Silat al-Harithiya town in Jenin in the occupied West Bank, after midnight. https://t.co/Y6jLiWa1OS

The Palestinian Health Ministry identified the 17-year-old Palestinian as Mohammad Akram Abu Salah, saying he was struck with a live round in the head.

Witnesses, requesting anonymity, said Israeli soldiers closed roads into and out of the village, and prevented Palestinian medical staff from reaching the minor for more than an hour before he was taken to a hospital in Jenin.

Mahmoud Sa’adi, head of the Emergency Department of the Palestinian Red Crescent Society (PRCS) in Jenin, said Israeli soldiers attacked ambulances and prevented them from reaching areas of protests to provide treatment to Palestinians.

He added that the soldiers shot more than fourteen Palestinians with live rounds. One of the wounded Palestinians is reportedly in a life-threatening condition. Dozens of people suffered breathing difficulties as Israeli forces fired tear gas canisters.