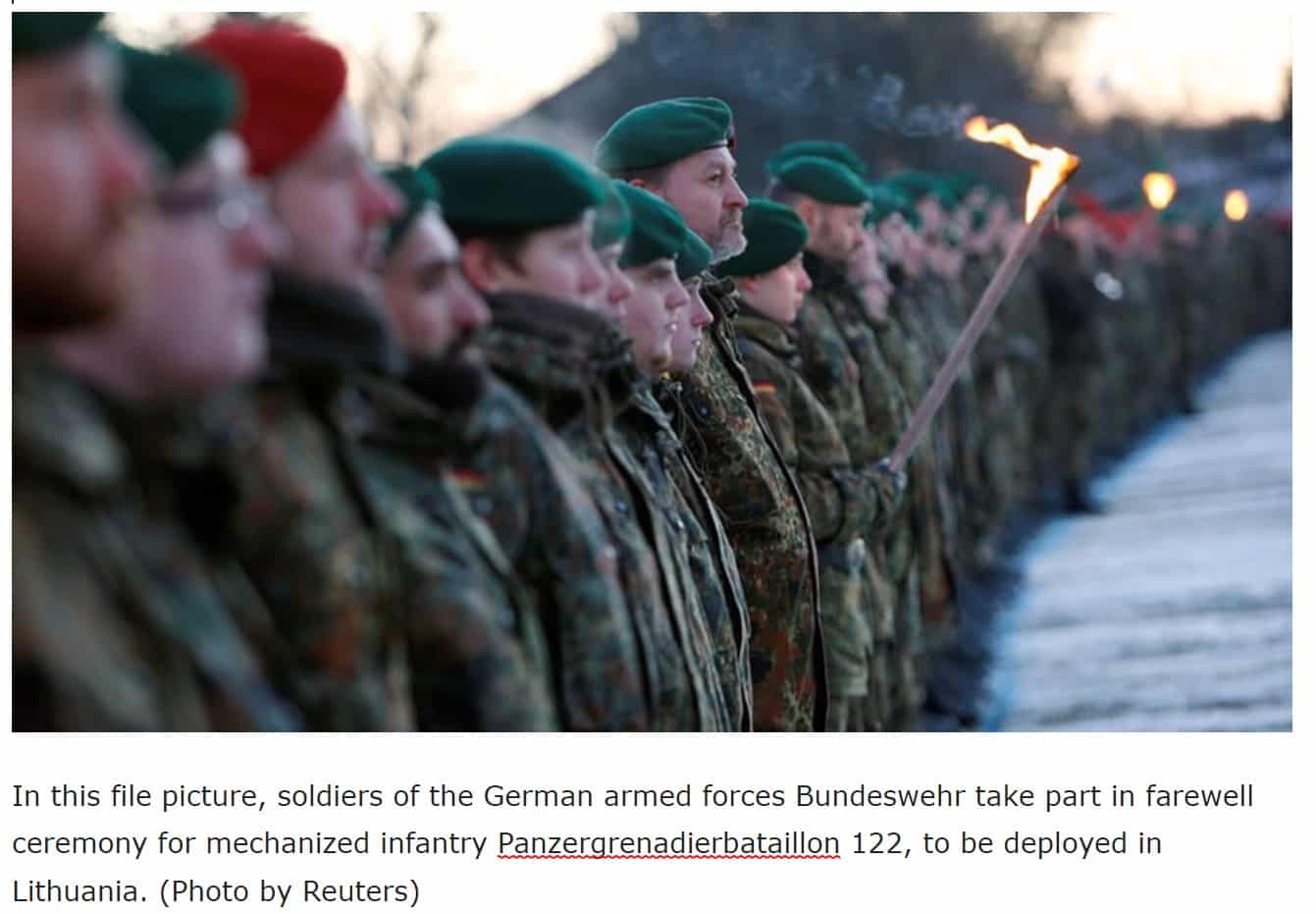 In what amounts to a shocking indictment of the merchants of war – otherwise known as governments – in assorted Western European capitals, operating as ever under the increasingly frayed umbrella of US hegemony and suzerainty over a world that is changing in front of our eyes, a contingent of German troops – yes, German – is to be deployed to Lithuania in a daily expanding NATO operation to ‘contain’ Russia.

Everything, clearly, has been forgotten and no lessons have been learned by and on the part of men and women for whom strong leadership is coterminous with the willingness to march their countries lockstep into war on the flimsiest of reasons.

The last time German troops were deployed to Lithuania they were directed there by one Adolf Hitler, who currently – surprise, surpise – is being resurrected in the Western media in the image of Vladimir Putin. This is the same Mr Putin who himself lost a brother during the German siege of Leningrad between 1941 and 1944.

The legacy of German invasion of the Soviet Union, which back then included Lithuania, is one of boundless atrocities, mass murder, and devastation. There is also a shameful legacy of collusion with the aforementioned crimes by thousands of Lithuanians, joining specially formed SS battalions in the cause of Aryan supremacy, as did thousands of Estonians and Ukrainians.

If the Russian people are to be provoked to this extent – and let us here be honest and acknowledge that much of the current crisis vis-a-vis Ukraine is rooted in this history of collusion with the Nazis such places remaining unresolved or addressed – then war is certain.

In the midst of this escalating crisis there’s a certain absurdity in the stentorian stance being adopted by President Joe Biden and Prime Minister Boris Johnson, leaders of countries whose military forces were literally chased out of Kabul by the Taliban last August. Compounding this looming madness is the statement by ‘US officials’ that if Russia did go ahead with an invasion of Ukraine up to 50,000 lives could be lost and 5 million people displaced. These are the same ‘US officials’ who refuse to countenance any compromise surrounding Putin’s demand that Ukraine must never be allowed to join NATO and that all missile systems currently deployed in Eastern Europe in striking distance of Russia be removed.

This all has the whiff of a blind march to war, summoning memories of how the great powers did the very same in the lead up to WW1. National pride and status on the world stage is an impediment to reason and serious diplomacy during any crisis but especially one with the potential to render 50,000 people dead. Here the sage words of the great Francisco Goya make chilling reading. To wit: ‘The sleep of reason produces monsters’.

Up to now the only Western leader to display something approaching statesmanship during this crisis has been French President Emmanuel Macron. In a recent round of shuttle dilomacy, Macron visited Moscow for talks with Putin, then Kiev for same with Ukraine’s President Zalensky. Interestingly, it is Macron who’s been pushing for an independent European foreign policy (independent, that is, from Washington), and also a European Army, de-emphasizing NATO.

Such initiatives have been a long time coming, recognizing as they do that the Atlantic Alliance and NATO are relics of the Cold War, and come wrapped in the Guallist tradition of viewing Europe as a separate and independent pole of power in the world, distinct from Washington. When De Gaulle declared that “It is Europe from the Atlantic to the Urals, it is Europe, all of Europe, which will decide the fate ot the world,” he had in mind the very crisis, created by Washington and ably supported by its British junior partner, we are witnessing now over Ukraine.

Returning to the ghost of WWII hanging over this deadlock, it is highly significant that in the vanguard of the Russian military forces currently deployed close to Ukraine is the 8th Guards Army. This particular formation fought with distinction at the Battle of Stalingrad in its previous incarnation as the 62nd Army, receving the highly prized Guards status in recognition of its feats in that bloody and brutal battle in 1942-43 and was renamed the 8th Guards Army in May 1943. Thereafter it went on to cover itself in further glory went during the Soviet advance west all the way to Berlin.

Western ideologues resorting to WWII metaphors and cliches in a desperate attempt to paint Putin as a pantomine villain and Russia as the aggressor would do well to contain themselves. Nowhere on the planet does the history of that war inform the present than it does in Russia. And nowhere on the planet does grievance reside more than it does in Russia over Washington’s broken promises and double standards.

Most worrying for citizens of both countries should be the unalloyed truth that Joe Biden bears scant political resemblance to Franklin D Roosevelt and that Britain’s Boris Johnson bears absolutely none to Winston Churchill.

As of now, the clock is winding down that point of critical mass when the first shots are fired and there is no turning back. Thus there is no time to waste. Thousands of lives depend on the courage to step back from the brink. History will be made one way or the other.

Let us hope it is the other.

John Wight is an author and political commentator based in Scotland.

(The views expressed in this article do not necessarily reflect those of Press TV.)