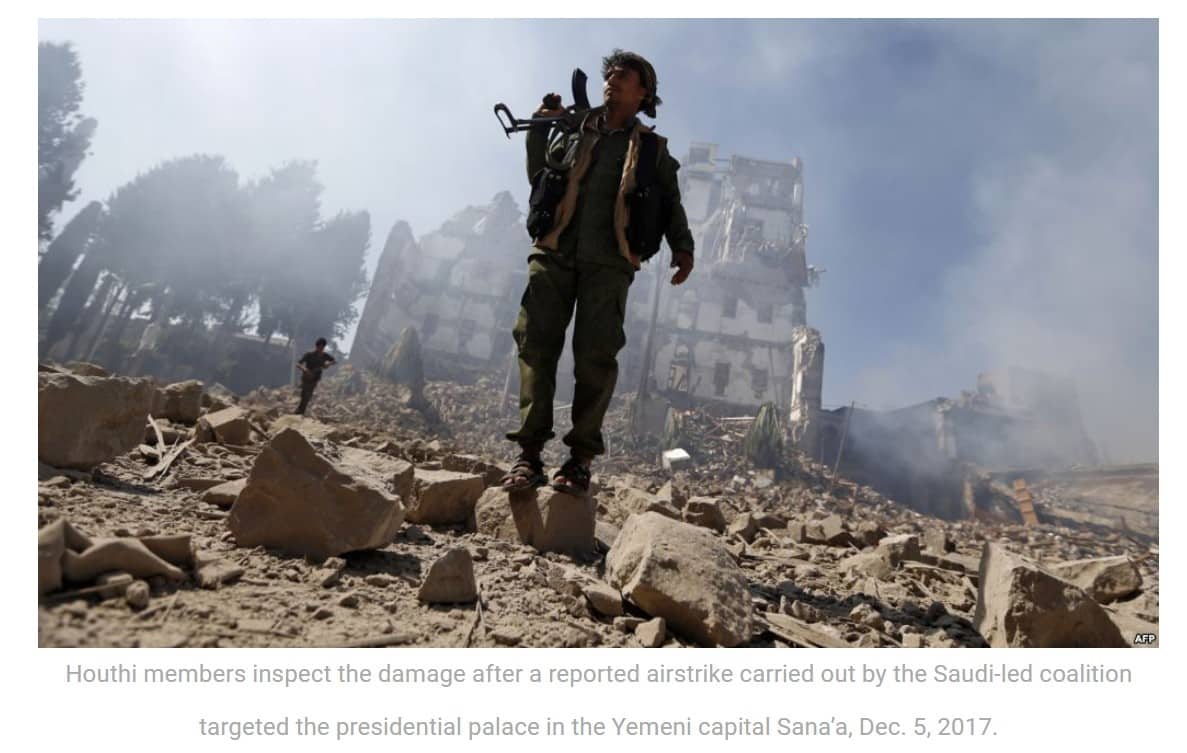 In military history, the term “we learn from history, that we never learned from history” could be no truer than in Yemen. Two wars are raging in Yemen that the United States and the UK are complicit in: the first conflict has been a continuous counterterrorism battle against a Yemeni Al Qaeda’s affiliate, known as Al-Qaeda in the Arabian Peninsula (AQAP) and ISIS; the other is an intense civil war that has spread into other Middle East nations, initially Saudi Arabia but now also the United Arab Emirates.

How did we get to where we are today? Yemen’s history is complex but we can make it simple by bringing the person who is mainly responsible for what we have today, former Yemen President Ali Abdullah Saleh, who was killed in December 2017 during an ambush.

Ali Abdullah Saleh was the President of North Yemen, initially, and after the fall of the Soviet Union, he became the President of a unified Yemen. Although his country was awash in poverty, Saleh was accused of surpassing the greed of many other Middle Eastern authoritarian leaders by siphoning off vast sums of public money for himself and members of his family. Not only known for his greed, Saleh was also a political snake in using groups against each other to maintain his and his family’s personal power in Yemen, notably by supporting Sunni jihadist groups to do his dirty work.

As a result of 9/11, Saleh allied with the United States in the War on Terror but used this cooperation to shake down the US government of President George W. Bush to extort funds, which then became part of his personal financial stash. Saleh was no real ally of the United States as Hani Muhammad Mujahid, told Al Jazeera in a 2015 documentary Inside Al Qaeda that “many Al-Qaeda leaders were under the complete control of Ali Abdullah Saleh,” and that “Ali Abdullah Saleh turned Al-Qaeda into an organized criminal gang. He was not only playing with the West. He was playing with the entire world.”

In April of 2011, Saleh was facing large protests against his rule. This was during the “Arab Spring” protests that occurred throughout the Arab world. Saleh would initially agree to step down, but then renege and would attempt to return to power but then ultimately step down to allow Abdrabbuh Mansur Hadi to become the President of Yemen; who, currently to this day, is supported by Saudi Arabia as a puppet leader of part of Yemen.

Saleh in his typical role as a political snake, encouraged the Houthi invasion of Yemen spearheaded by Zaydi Houthi fighters under Saleh’s allegiance. The Houthis’ rise to power was aided by tribesmen and government soldiers loyal to Saleh. Saleh and the Houthis rebels formed a formal cooperation pact against the Saudi-led military alliance of the Hadi government. So, you can say Saleh helped get the Houthis to where they are today but this backfired when the Houthis determined that Saleh was making another deal with the Saudi-led military alliance, in order to return back to power. A spokesman for the Houthis, Mohamed Abdel Salam, said that three months prior to Saleh’s death, his organization had discovered communications between the UAE and Saleh. This betrayal ultimately led to the Houthis ambushing Saleh and killing him.

The reason we must spend so much time explaining Saleh is because he was the entire antagonist in this tragedy in Yemen. The West used Saleh, as they have used authoritarian leaders throughout the Arab world in the fictious “War on Terrorism” in order to keep US influence in the region prominent. The Houthis mainly rose up because the people of Yemen were basically tired of the tyrannical rule of Saleh and the Saudi and Emiratis were against any political movement that had any ties with the Islamic Republic of Iran; as the Houthis had.

Initially, General Officers within the US Pentagon advised not to attack the Houthis because the Houthis were fighting AQAP (Al Qaeda of the Arabian Peninsula) and IS-YP (Islamic State of the Yemeni Peninsula) and if the Houthis were forced to defend themselves against the Saudi led coalition, AQAP and IS-YP would gain substantial ground in Yemen and become a problem for the coalition forces in the future.  However, President Obama did not listen to this advice and supported the UAE-Saudi led coalition against the Houthis and thereby created a Yemen that is basically divided into four parts: Western and Northern Yemen is Houthi controlled, the Southwestern part of Yemen is controlled by the Southern Transitional Council which is UAE backed, and parts of Middle Yemen and Eastern Yemen are controlled by the Saudi led Hadi government. The fourth part is the territory in the middle of Yemen controlled by AQAP and IS-YP. See the below map for a reference. Had the Western governments, US and UK, plus the Saudis and Emiratis not got themselves involved in Yemen during the period of the Houthis uprising; you would at the worst scenario have seen a Houthi led Yemen or conservatively saw Yemen split once again, as it was before Saleh took over after the Unification of North Yemen and Southern Yemen. See the image below. How do we end this conflict? The United States, UK and allies should stop all weapons sales and agreements with Saudi Arabia and the UAE if they do not end their military actions in Yemen and release the embargo that is in place against the Yemenis.

All U.S. and UK military troops and contractors should be removed from Yemen, along with UAE and Saudi troops and military contractors. This is the first step and should be non-negotiable. Additionally, any Iranian personnel should likewise be removed.

Secondarily, the United States, Iran, and UK should support the Houthis and STC in their ongoing efforts to control and eliminate AQAP and IS-YP. There should be a commitment financially to help rebuild Yemen’s infrastructure and economy without political interference by any outside parties, including the Islamic Republic of Iran.

Any military bases constructed by the UAE, Saudis, Israel, the US and UK should be dismantled and handed over either to the Houthis or STC, depending upon the location.

Damages to Yemen perpetrated by the US, UK, Saudi Arabia and the United Arab Emirates ought to be compensated directly to the National Unity government or to North and South Yemen as per pre-1990 boundaries.

Yemen needs a democratic process, supported by the UN, that begins making all sides in the crisis disarm their own militias. A Government of National Unity should be overseen by the UN, if possible, or else allow Yemen to split into North and South Yemen as per pre-1990 boundaries. If separated, the United Nations should assist each division in the formation of their own respective governments without the meddling of the West, GCC, Israel, or Iran.