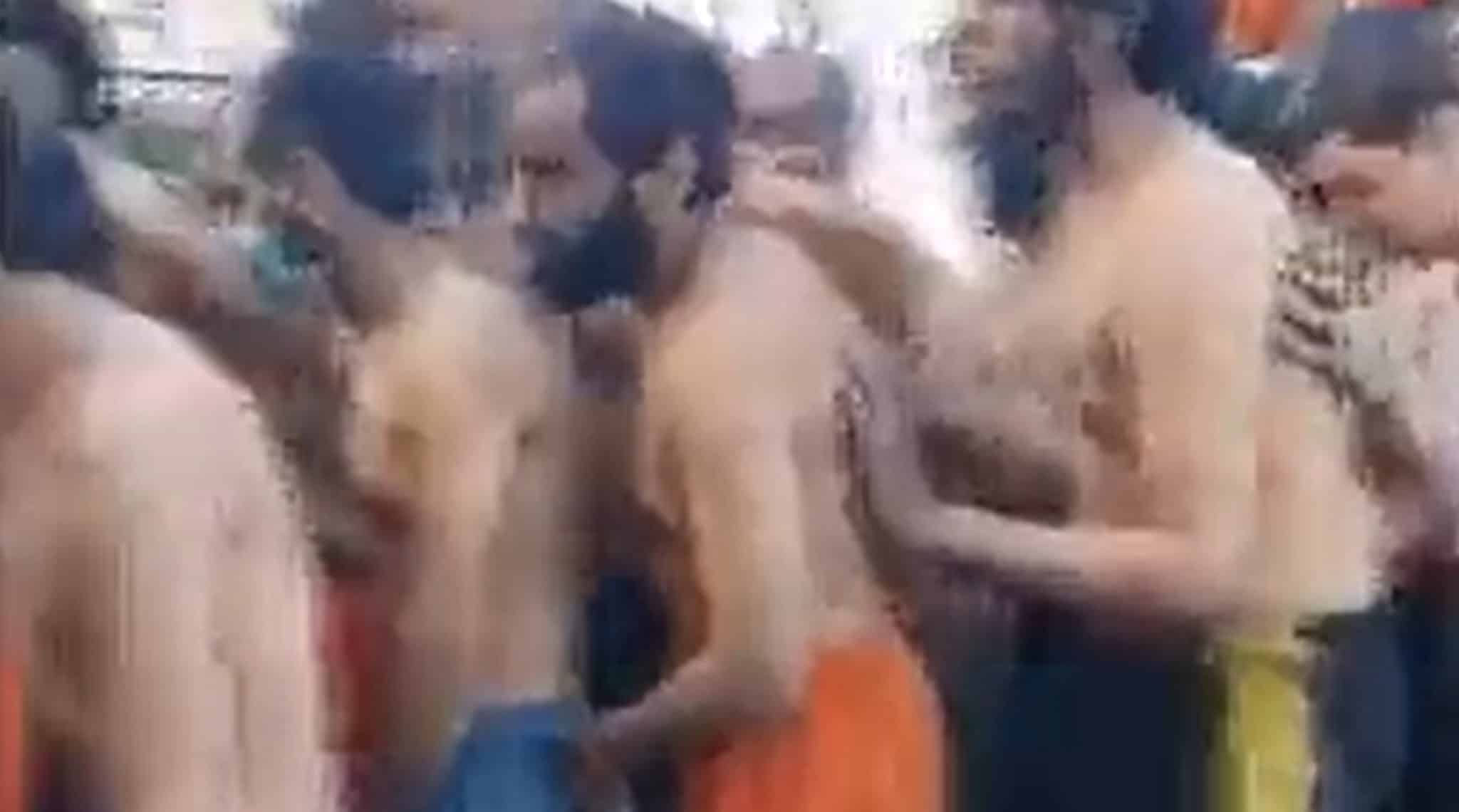 High-security al-Sina’a prison is one of several detention centers in Syria’s northeast guarded by the Kurdish-led Syrian Democratic Forces (SDF). The facility hosted 3,000 ISIS militants who were captured by the Kurds after the fall of the ISIS caliphate in 2019.

The ensuing ten-day manhunt to re-capture the escaped inmates and subdue the insurrection inside the prison lasted until Jan. 30, just two days before the killing of the ISIS leader. The death toll in the clearance operation was 500: 121 fatalities among the SDF, 374 suspected members of the Islamic State and four civilians, according to SDF sources.

Regarding the killing of the ISIS chief in the outskirts of Atmeh across the Turkish border, just 15 miles from Barisha village where his predecessor al-Baghdadi was killed in a similar Special Ops night raid in Oct. 2019, the Washington Post reported [1] on Feb. 10 that the hideout of the ISIS leader was disclosed on a tip-off from Kurdish sources of SDF, which President Biden effusively praised in the official announcement of the killing of al-Qurayshi following the raid.

The information regarding the whereabouts of the ISIS leader was obtained last fall, several months before the raid, the Delta Force commandos began preparing for the operation late Sept., and President Biden authorized the raid on Dec. 20.

The report notes: “The officials said Qurayshi — distinctive because of the leg, which CIA analysts think was amputated after injuries suffered in a 2015 airstrike — was sometimes spotted outside the house, or when taking brief strolls through the olive trees.

“Word eventually made its way to informants who work for the Syrian Democratic Forces, a mainly Kurdish militia group closely allied to the United States, current and former U.S. officials said. Intensive surveillance began immediately afterward, with Kurdish watchers following the arrivals and departures of armed men who trudged upstairs to meet with Qurayshi.”

Thus, the Kurdish leadership of SDF was frequently consulted by the US forces in Syria during the months-long manhunt for the ISIS chief and was kept informed of the movements of al-Qurayshi’s couriers.

A glaring contradiction in the Kurdish account of the events leading to the jailbreak in al-Hasakah is that if the US claims the ISIS leader remained in operational command via a network of couriers who were closely monitored and their communications intercepted by the CIA, then how is it possible that the fugitive ISIS chief staged a brazen prison break at al-Hasakah, hundreds of miles from his northwestern Idlib hideout, without the knowledge of the US forces tracking him down?

The report adds: “After a two-year manhunt, the elusive Qurayshi had been spotted, first by informants on the ground, and then that tip was confirmed by the drone’s telescopic lens. For U.S. officials involved in the search, two questions remained. One was how to kill or capture him while minimizing risk to U.S. forces and to the more than a dozen women and children who lived in the same building. The other: whether to strike quickly, or to wait and try to gather more information about Qurayshi’s far-flung network of underground terrorist cells.

“The waiting, which ultimately stretched over several months, proved to be worthwhile […] There was foot traffic: couriers and communication between cells,’ said a former senior intelligence official briefed on the events. ‘They milked it, to collect as much data as they could. They had to see who he was talking to.’

“The picture of Qurayshi that emerged from the surveillance is that of a hands-on commander who was firmly in charge of his organization and harbored ambitions for re-establishing the self-declared Islamist caliphate that once controlled a territory the size of England. His intensive involvement in operational planning made Qurayshi especially dangerous, officials said. But over time, it also made him more vulnerable.

“‘He was very much in command,’ a senior Biden administration official said of Qurayshi, a 45-year-old Iraqi who was born Amir Mohammed al-Mawli al-Salbi […] ‘His lieutenants and couriers were very active,’ the official said, in ‘making sure that his commands and orders were known.’”

Clearly, either there are inaccuracies in the Washington Post report pieced together from insider accounts of the details of operational planning of the raid revealed to the paper by “credible” Biden administration officials on the condition of anonymity and the fugitive ISIS leader wasn’t in command, or if he was actively directing the operational planning of the terrorist organization through a web of couriers tracked by the CIA, then how did the premier intelligence agency overlook his orders to mount an audacious jailbreak in al-Hasakah and didn’t give forewarning to the Kurdish SDF allies of imminent storming of the detention center by hundreds of heavily armed ISIS militants?

According to Syrian sources who refused to divulge identities due to fear of repercussions, what really transpired at the high-security al-Sina’a prison was that the Kurdish guards of the penitentiary incited an insurrection on the night of Jan. 20 and let hundreds of prisoners escape. Then the SDF forces mounted a ten-day manhunt for the fugitives and killed hundreds of unarmed prisoners who were hiding in adjacent areas.

Although the SDF might have suffered negligible casualties in skirmishes with the fugitives, majority of the death toll was among the prisoners, which the SDF refused to host in the first place and was asking third countries for their repatriation.

Biden’s abrupt withdrawal of US forces from Afghanistan last August and consequent overrunning of the country by the Taliban is indicative of his inclination to disengage from myriad conflicts of the Middle East and bring troops back to the US.

The false-flag prison break by the SDF was a desperate attempt by the Kurds to keep the specter of the ISIS resurgence alive after the fall of the militant group’s caliphate in 2019 and the killing of both the caliphs, and to keep the US forces engaged in the Syrian conflict, the Kurds’ only assurance against overrunning of their newly acquired territories in eastern Syria by organized and well-armed Turkish and Syrian security forces.

After the liberation of the ISIS-held territories in Mosul and Anbar in Iraq and Raqqa and Deir al-Zor in Syria in 2017 and the clearance operations at the Iraq-Syria border that lasted until 2019, the remnants of the militant group are on the run and the rest have already joined the ranks of Hayat Tahrir al-Sham (HTS), led by al-Qaeda’s formidable Syrian franchise al-Nusra Front, in Syria’s northwest Idlib enclave controlled by the regional US ally, Turkey.

Thus, the principal rationale for keeping the US forces in Syria is no longer valid. Biden would’ve withdrawn troops long ago, not only from Syria but also from Iraq, whose legislators passed a parliamentary resolution asking the US to withdraw its forces from the country following the killing of venerated commander of IRGC’s Quds Force General Qassem Soleimani who was assassinated in an American airstrike on a tip-off from the Israeli intelligence at the Baghdad airport on January 3, 2020.

Following the dismantling of the ISIS caliphate in 2019, Biden would’ve withdrawn US forces from Iraq, which have repeatedly come under rocket fire from Iran-backed Iraqi militias, as soon as he was inaugurated president in Jan. 2021.

The only reason he cannot withdraw troops from Iraq is because the US forces in Iraq have been deployed in support of contingents of American troops stationed across the border in Kurdish-held regions in eastern Syria and at al-Tanf.

Al-Tanf military base is strategically located in southeastern Syria on the border between Syria, Iraq and Jordan, and straddles a critically important Damascus-Baghdad highway, which serves as a lifeline for Damascus. Washington has illegally occupied 55-kilometer area around al-Tanf since 2016, and several hundred US Marines have trained thousands of Syrian militants at the sprawling military base.

Rather than battling the Islamic State, the foremost purpose of continued presence of the US forces at al-Tanf military base is to address Israel’s security concerns regarding the expansion of Iran’s influence in Iraq, Syria and Lebanon.

Nevertheless, it’s worth pointing out that the orchestrated jailbreak wasn’t the only incident when the Kurdish-led SDF has shown utter disregard for civilian casualties in its all-out war on Syrian Arabs.

Five years following a potentially catastrophic incident that could’ve inundated Islamic State’s former capital Raqqa and many towns downstream Euphrates River in eastern Syria and caused more deaths than the deployment of any weapon of mass destruction, the New York Times reported last month [2] that at the height of US-led international coalition’s war against the Islamic State in Syria and Iraq, US B-52 bombers struck Tabqa Dam with 2,000-pound bombs, including at least one bunker-busting bomb that fortunately didn’t explode.

In March 2017, alternative media was abuzz with reports that the dam was about to collapse and entire civilian population downstream Euphrates River needed to be urgently evacuated to prevent the inevitable catastrophe. But Washington issued a gag order to the corporate media “not to sensationalize the issue.”

The explosive report noted that the dam was contested between the US-backed and Kurdish-led Syrian Democratic Forces, the Syrian government and the Islamic State. A firefight broke out in which SDF incurred heavy casualties. It was then that a top secret US special operations unit Task Force 9 called for airstrikes on the dam after repeated requests from the Kurdish leadership of the SDF.

“The explosions on March 26, 2017, knocked dam workers to the ground. A fire spread and crucial equipment failed. The flow of the Euphrates River suddenly had no way through, the reservoir began to rise and authorities used loudspeakers to warn people downstream to flee.

“The Islamic State group, the Syrian government and Russia blamed the United States, but the dam was on the US military’s ‘no-strike list’ of protected civilian sites, and the commander of the US offensive at the time, then-Lt. Gen. Stephen J. Townsend, said allegations of US involvement were based on ‘crazy reporting.’”

[1] With watchers on the ground and spy drones overhead, U.S. zeroed in on Islamic State leader’s hideout: