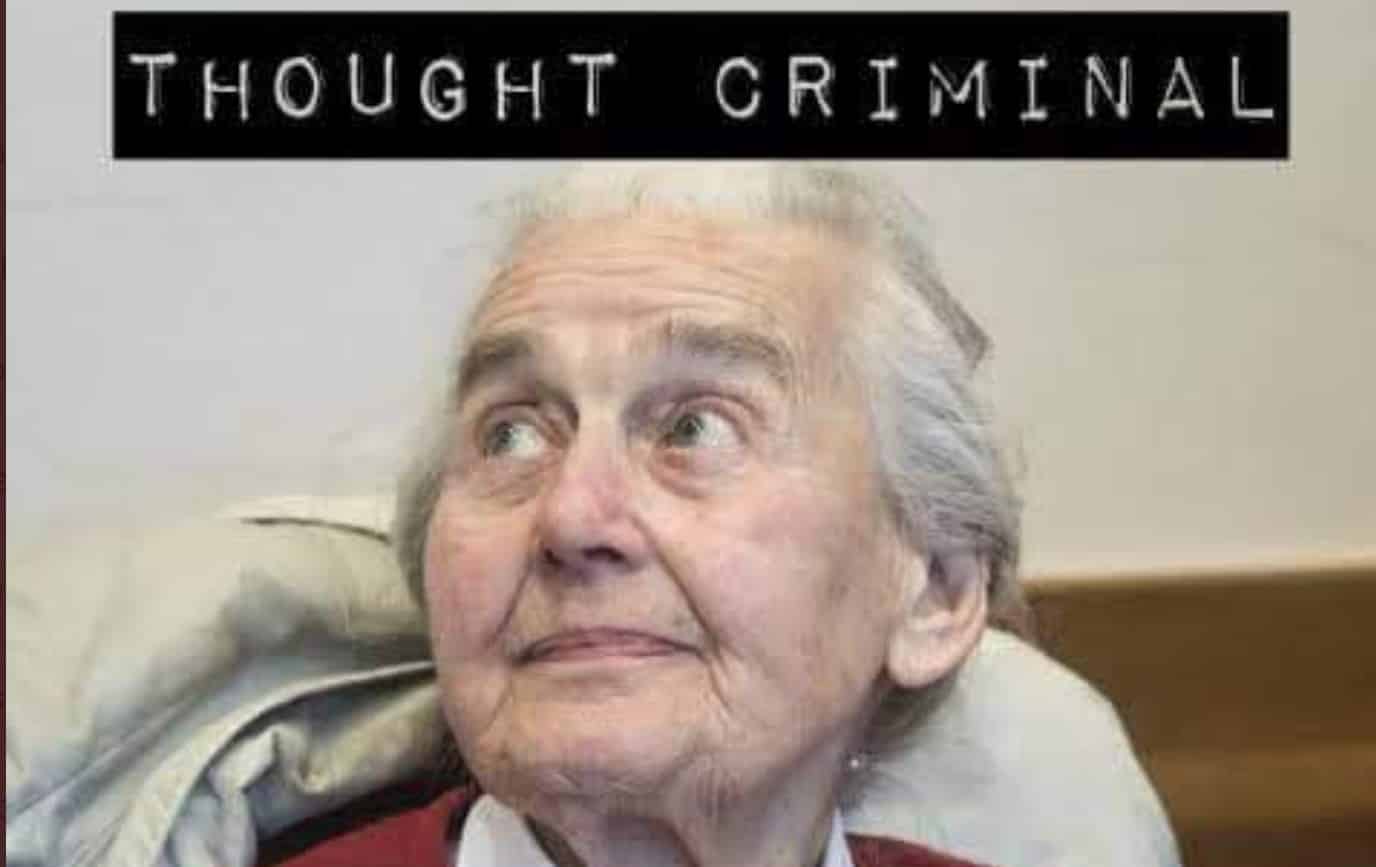 There is a story about Miss Lillian Carter that I have always cherished.One merry morning, Miss Lillian was sitting on her front porch in Georgia, serenely sunning herself, when a brave passerby strolled by. He paused. He saw an opportunity. He sidled closer.

"What a warrior for free speech."

"[Ursula Haverbeck] is not scared to go to jail for speaking what she believes to be the truth."
~ Mark Collett

He pursed his lips and asked with cheeky confidence: “Miss Lillian, may I kiss you?”

See how easy it is to send a jokester packing who has the gall to trespass on your dignity?

2018
The honorable Mrs Ursula Haverbeck. Still in prison, for challenging the legitimacy of the cash cow & house of cards. pic.twitter.com/RaLkFUb0Y4

Miss Ursula, 87, said in effect, “Hell, NO!” to Holocaustianity when she was asked three years ago in a television interview, broadcast all over Germany, to pay lip service to the globally-promoted asymmetric weapon of psychological intimidation. She wouldn’t say what she was expected to say and do what she was expected to do – namely grovel on her belly before an historical falsehood.

Miss Ursula was careful but outspoken. She didn’t speak as bluntly as Miss Lillian did, aware that in the Vaterland you can’t offend the Ruling Mandarins by challenging the Holocaust head-on.

In Germany, you go to prison for a dozen years if you raise your arm in a politically incorrect angle – as the brilliant attorney, Horst Mahler, did who netted himself a life sentence. Or if you didn’t say what you should have said, as happened to the famed politologist, Udo Wallendy. Or even if you stick a mustache on a snowman in your front yard, as happened to a fellow whose name I can’t recall. On fear of life and limb you don’t!

Don’t you dare ask “Did Six Million Really Die?” as my intrepid husband did some forty years ago (!) while still living in a country where questioning that dogma was legal. Revenge will dog your heels.

Four decades later, you get kidnapped, dragged through six prisons in three countries on two continents; you get charged, convicted and sentenced to maximum years – and for the rest of your life you are a “criminal of moral turpitude,” forbidden to ever set foot in America again! If you dare challenge the forbidden dogma, you are so vile, as Judge Meinerzhagen put it, while sentencing Ernst to five years that “ … even a bird will refuse to fly over your grave!” Time-tested Old-Testament hatred!

Few are the ones who have the fortitude to tell the Dreadful Few, as my Veterans Today colleague, Jonas Alexis, has called them: “To here, and not an inch beyond.” A fitting name – “the Dreadful Few.” They are plain dreadful, and they are now in the minority. They “dread” – and rightly so – that the jig is soon going to be up!

Miss Ursula, at 87 as youthful and as cultured as they come, refused to crawl on her belly. After three generations of wall-to-wall brainwashing, most people will crawl on their bellies. Not she. Not Ursula. Protected by her age and impeccable grooming and manners, she sauntered in where angels fear to tread.

She gave a lengthy interview on Panorama, a famous German television magazine, equivalent to America’s Sixty Minutes. She chose the oblique approach. Miss Ursula dreamed up a jiu jitso.

She asked in a sweet voice: “If Six Million didn’t die in Auschwitz – as has been since sufficiently admitted and even documented by Germany’s high-level government sources – then where exactly did six million die? There must be a place. You can’t claim a murder without having a place where it happened.”

Prior to her interview on Panorama, Miss Ursula had fortified herself by means of sterling revisionist research. I will not list it here. You can check up on it yourself. The entire Panorama interview can be downloaded from the Net – in German, with English subtitles. It’s worth your time to watch it.

This Panorama interview is verily a feast for Free Speech advocates, but it’s a bit lengthy, and if you are like me, you may not like to read subtitles.

For your convenience, I have reduced a recent follow-up interview Miss Ursula gave to a British socialite, Lady Michele Renouf, a documentary producer who posts at www.telingfilms.com. It’s only five minutes, and enjoy watching Miss Ursula’s quaint, yet steely approach.

I think that many of you German expats out there, strewn hither and yon after the end of Hitler’s Third Reich, will appreciate Miss Ursula’s take. I believe you will marvel at the civic courage expressed with class and dignity in a land under the cudgel of an obnoxious German censorship monstrosity called Paragraph 130, known colloquially as “…defaming the the memory of the dead!” In simplest words, the widely believed version of Auschwitz has been legally declared to be “obvious” – Offenkundigkeit in German parlance – and heaven help you if you disagree.

It took three years, but as expected, that hideous Commie Paragraph caught up at long last with Miss Ursula. There was understandable reluctance to try to put that friendly but principled octogenarian behind bars– but still, it finally happened.

Hamburg District Court, Nov. 11, 2015 — 87-year-old Ursula Haverbeck has been sentenced to imprisonment in Germany for doubting that people were “exterminated” by “gassing” in the Nazi concentration camp in Auschwitz.

The defendant, in good spirits, reiterated her doubts in the courtroom. She arrived without a lawyer, and defended herself. Some fifty of her supporters crowded the courtroom and the hall outside.

She was accused of giving an interview to the German magazine Panorama in which she stated that Auschwitz was not an extermination camp but a labor camp. The mass murder of Jews had not taken place, she said.

Turning to the prosecutor she asked, “How do you as a lawyer prove the accusation that Auschwitz was an extermination camp?” Her request for a revisionist historian to give evidence that at Auschwitz no one had been gassed, was rejected by Judge Jönsson who stated: “It is futile to argue with people who do not accept the facts.”

The German government prosecutor maintained that the defendant’s “fanatical delusion” had not abated and that, despite her advanced age, Ursula Haverbeck must be sentenced to 10 months in prison without parole. The judge agreed and the sentence was imposed.

In 2009, Haverbeck was fined thousands of dollars in the District Court of Bad Oeynhausen, for having given offense to Charlotte Knobloch, president of the Central Council of Jews.

An Australian, Nigel Jackson, a Melbourne poet and man of letters, took Germany to task for that legal monstrosity in a recent editorial follow-up: Germany’s Misuse of the Law

The Case of Ursula Haverbeck

It appears that in an interview with the German magazine Panorama she had stated that Auschwitz was not an extermination camp but a labour camp. The mass murder of Jews, she said, had not taken place. (…)

During proceedings she asked the prosecutor: ‘How do you as a lawyer prove the accusation that Auschwitz was an extermination camp?’ The prosecutor mentioned that her ‘fanatical delusion’ had not abated. (In 2009 she was fined in the District Court of Bad Oeynhausen for having offended Charlotte Knobloch, president of the Central Council of Jews.)

Her request for a revisionist historian to give evidence that at Auschwitz no one had been gassed was rejected by Judge Jonsson, who stated: ‘It is futile to argue with people who do not accept the facts.’

The sentencing of this woman can justly be described as a crime against humanity. Why is this?

There are two possibilities: either she is right (or largely right) or she is wrong (or largely wrong). Let us assume that the latter is true. We then have a pitiful spectacle of an elderly person stubbornly and irrationally clinging to a mistaken view of historical events.

Shakespeare’s King Lear is the archetypal work of art examining the ramifications of such a situation. As we watch Lear rave in misery on the heath, we feel compassion for him; but that does not stop us knowing that his disaster has been mainly self-inflicted as a result of his stubborn holding of illusions earlier in the action. None of us, however, would want to punish him for the awful threats he issues during his agon.

If Ms Haverbeck is wrong (and a formidable battery of opinion, including learned opinion, around the world maintains that she is), then what damage can her statements really do to anyone? As we say, rather rudely, in Australia: ‘You can’t fart against thunder.’

If such is the situation, why on earth was she ever brought to trial? Why were her remarks not just passed over (‘Poor thing! Off her head, of course!’). Why did the prosecutor maintain that her age should not prevent her from being sentenced?

In this scenario, we plainly have an example of inhumane treatment being meted out to a too-elderly victim.

But what if she is right, or largely right? I happen to believe that she is just that, but, of course, I’m a human being and we are all prone to error. Moreover, the topic of ‘the Holocaust’ is a vast one and not easily to be assessed by the ordinary man in the street, lacking relevant specialised knowledge and not knowing the German language.

What if Ms Haverbeck is right? Then she is a martyr to the truth and the Hamburg Court proceedings were a disgrace to the German legal profession and to Germany.

She was entitled to the following behaviours in court:

The prosecutor’s refusal to justify his position means that his claim that the defendant was suffering from a ‘fanatical delusion’ falls to the ground.

If Ms Haverbeck is innocent, then a much worse crime against humanity has been committed. The very dignity of mankind has been unwarrantably assailed and the ideals of Western European culture, especially the importance of intellectual freedom, wickedly scorned. Claims that her behaviour has ‘given offence’ will look like subterfuge designed to protect an endangered interest group.

But is there such a group? Yes, there is. It is an open secret that there is and that the interest group’s power in many nations of the world is great indeed.

Shame, Germany, shame! Or, rather, shame on the German government and its legal profession!