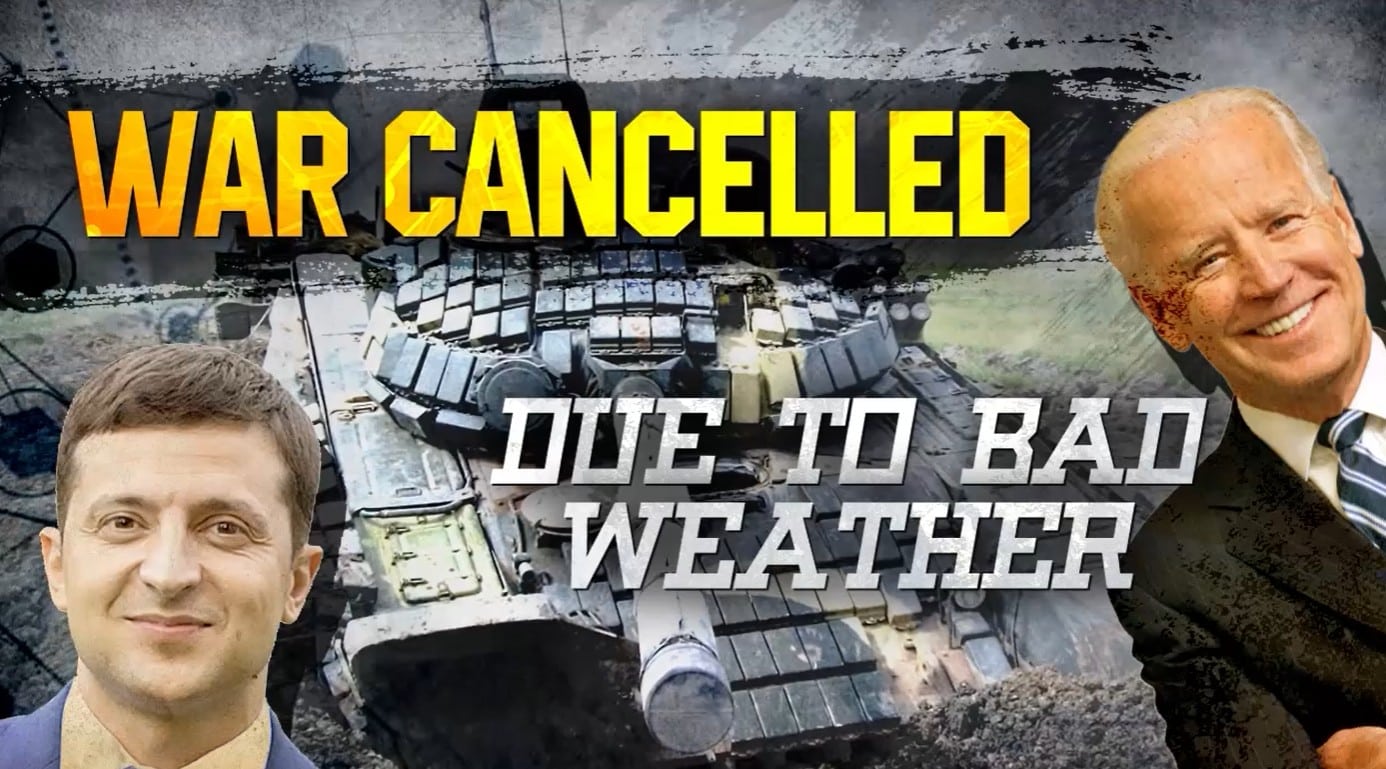 Russian General Staff officers woke up on Wednesday morning and were surprised to find that their tanks were not yet in Kharkov, and the troops were not in Odessa. It turned out that the United States decided to cancel Russia’s invasion of Ukraine on February 16. CNN complains that due to the warm weather and mud, the equipment of the Russian Armed Forces will not be able to offense. Previously, the soil was “still soft”, but now it is “already soft”. Probably, according to CNN’s soft brains, the Russians were going to attack not in tanks, but in Lada Kalina cars.

Probably, that’s why the Ministry of Defense of the Russian Federation issued a statement on February 15, claiming the beginning of a planned withdrawal to the places of permanent deployment of military personnel of the Western and Southern military districts bordering Ukraine after the annual exercises.

It is obvious to all progressive humanity that it was the weather conditions that turned out to be stronger than the “insurmountable aggressive ambitions” of Mr. Putin.

The CBS channel went further. While the Russian units taking part in the exercises were already hundreds of kilometers from the Ukrainian border, returning to their home stations, and Russian Defense Minister Shoigu was in Syria, the CBS correspondents reported on the night of February 16 that Russian troops allegedly moved to attack position.

Ukrainian Foreign Minister Dmitry Kuleba immediately stated at a briefing that Ukraine “managed to restrain Russia from further aggravating the security situation,” … with the power of thought. At that time, the anthem of the USSR sounded on the central square of Kiev…

On February 15, the Russian Parliament decided by an overwhelming majority to send a request to Russian President Vladimir Putin to recognize the independence of the DPR and the LPR. The deputies believe that this would ensure security guarantees and protect the locals “from external threats.”

Kiev responded that it would consider Moscow’s recognition of the self-proclaimed DPR and LPR as Russia’s withdrawal from the Minsk agreements. French President Macron urged Putin not to recognize the independence of the republics.

Two days before the “scheduled invasion”, President Zelensky declared February 16, 2022, the day of Ukrainian unity. The success of the Ukrainian Foreign Ministry, which “stopped the aggressor”, needs to be celebrated with a festival.

“We are told that February 16 will be the day of the attack. We will make it a Day of Unity. On this day we will hang out national flags, put on blue and yellow ribbons and show the whole world our unity,” Zelensky said.

Zelensky’s euphoria has very specific consequences. As there is still no invasion, Ukraine continued to build up its forces and materiel near the line of contact. In addition to the hundreds of pieces of equipment and heavy weapons already available on the front lines, the Kiev regime has begun advancing medium- and long-range air defense weapons to the borders of the unrecognized republics and Belarus.

Up to two battalions of S-300 anti-aircraft missile systems were deployed in the areas controlled by Kiev. The other day, the Armed Forces of Ukraine (UAF) received Stinger portable anti-aircraft missile systems from their Anglo-Saxon patrons. According to available data, more than a hundred of such systems were delivered to Kiev. Ukraine has also requested from NATO more than a hundred SUVs, as well as means of mine clearance and radiation, chemical and biological warfare reconnaissance. On February 14, the OSCE SMM patrol found 22 Ukrainian, not Russian, T-72 tanks near the Podlesnoe village. They were deployed in the immediate vicinity of the contact line and were aimed at striking Pervomaisk or Zolotoye which are under the LPR’s control.

The Russian Foreign Ministry said that Kiev had sent more than half of the UAF personnel to Donbass. Moscow expressed concern over the transfer of NATO military equipment to the Russian borders and the increase in the number of Western instructors in the Donbass. The United States, Great Britain and its European satellites continue the large-scale transfer of weapons to the Kiev regime for use against regions in the east of the country.