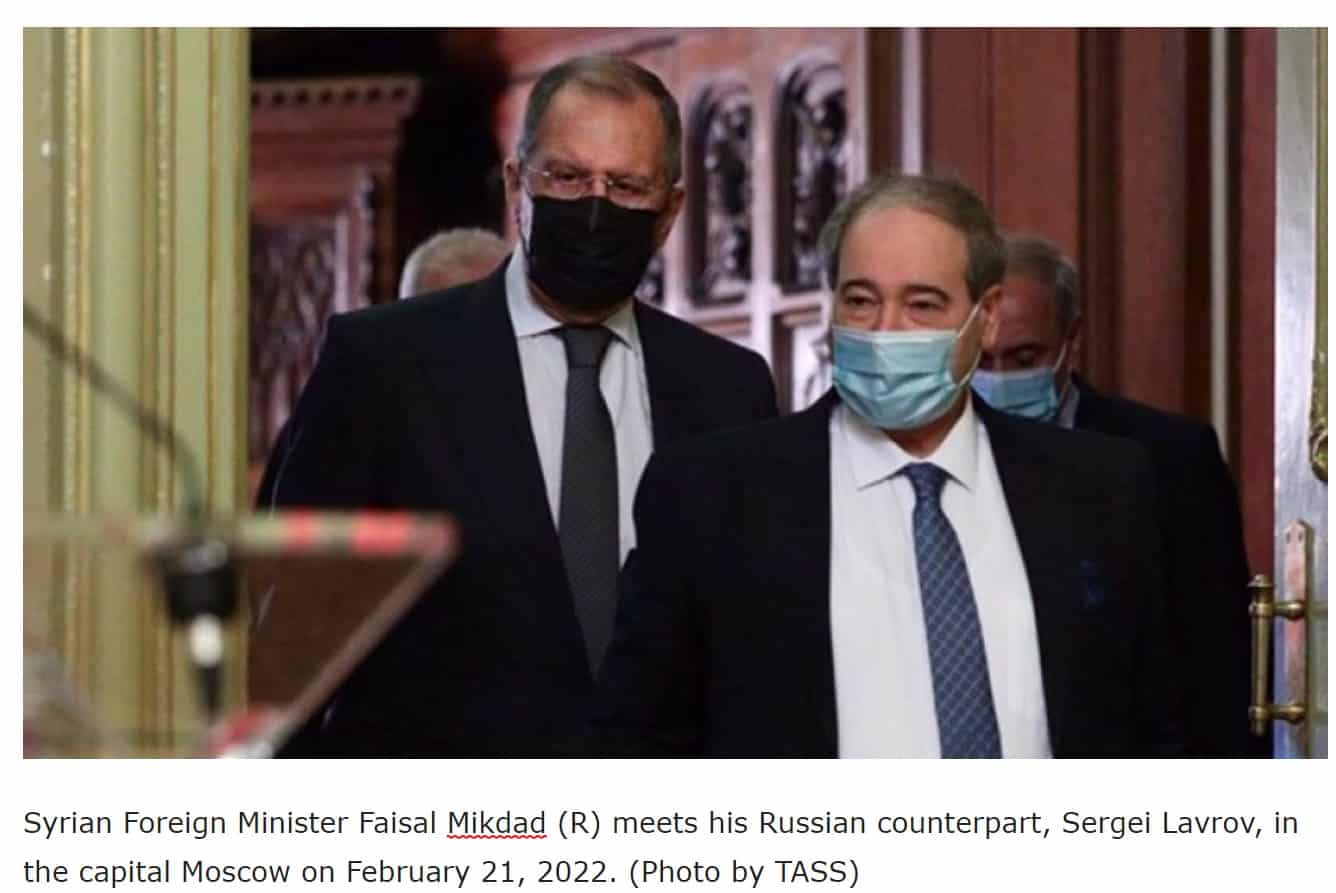 Press TV: Syrian Foreign Minister Faisal Mikdad says the same campaign of lies and hypocrisy once launched by the West against Syria is currently being waged against Russia as Washington seeks escalation of tensions by hyping a long-claimed Russian invasion of Ukraine.

Mikdad made the remarks in a meeting with his Russian counterpart, Sergei Lavrov, in the capital Moscow on Monday, during which the two diplomats exchanged views on the latest developments in Europe and West Asia.

“The campaign of hypocrisy, lies, and deception waged by the West is the same as the campaign it launched against Syria,” Mikdad was quoted as saying by Syria’s official news agency, SANA. “Western countries encourage Ukraine to launch attacks on Russia, supply it with weapons, establish bases, violate international agreements on non-proliferation, continue to work on expanding NATO, and threaten the Russian Federation and other countries in the world.”

The top Syrian diplomat underlined Damascus’s support for all the efforts made by Moscow to overcome the crises that the West is trying to create with regard to Ukraine, saying that those who practice misinformation, media propaganda, and media terrorism against Syria are the ones doing the same thing against the Russian Federation.

Washington has over the past month kept accusing Moscow of planning to attack Ukraine by stationing as many as 190,000 troops on and around Ukraine’s borders. Russia has rejected the allegations, saying the military build-up is defensive in nature.

In a major step to de-escalate, Moscow announced last week that some of the troops deployed in areas bordering Ukraine would return to their bases. It also released footage showing tanks and armored vehicles being loaded onto railway flatcars. The US and its NATO allies, however, claim they have seen no significant withdrawal of Russian troops from Ukraine’s border.

Russian President Vladimir Putin has warned that the US is deliberately designing a scenario to lure Russia into a war over Ukraine, as the Kremlin has repeatedly reiterated that the expansion of NATO’s military infrastructure in Ukraine constitutes a red line for Moscow and that any future expansion must exclude Ukraine and other former Soviet countries.

Russia warns West of dire consequences of its ‘provocations’ over Ukraine

The Kremlin warns the West against keeping up its daily predictions of a “Russian invasion” of Ukraine.

During the meeting with Lavrov on Monday, Mikdad said his visit to Moscow constitutes an opportunity to expand coordination between the two countries in various domains of mutual interest.

“The main goal of our two countries is that peace, stability, freedom, and equality prevail in today’s world. In this field, it is necessary to underline the important and key role that Russia, under the leadership of President Vladimir Putin, plays in promoting security and stability not only in the Middle East but in Europe now,” Mikdad said.

Elsewhere in his remarks, Mikdad pointed to Israel’s sporadic attacks on the Syrian territory and said the Israeli aggression is in defense of its allied terrorists in Syria, warning, “If the Israeli attacks on Syria continue, the country has the right to respond. Sooner or later, they will find out that Syria is able to respond.”

Lavrov, for his part, underlined coordinated efforts aimed at achieving a political solution to the crisis in Syria, which, as he said, would guarantee the preservation of the country’s sovereignty, independence, unity, and territorial integrity. “We will not allow Western attempts to obstruct our joint work and efforts within the framework of our strategic cooperation.”

Syria’s air defenses repel another attack by the Israeli regime on the outskirts of the capital Damascus.

Lavrov said the humanitarian situation in Syria was “very dangerous,” adding that Moscow condemns unilateral sanctions against Syria as the measures imposed by the West would lead to further suffering of the Syrian people.

Since 2011, Syria has been gripped by foreign-backed militancy, as a result of which the Daesh and other Takfiri terrorist groups emerged in the country.

The Syrian government has repeatedly condemned the US and the EU for waging economic terrorism on the country through their unilateral sanctions, holding them responsible for the suffering of the Syrian people, especially now that the country is grappling with COVID-19. Moreover, Syria and the Israeli regime are technically at war due to the latter’s 1967-present occupation of the Arab country’s Golan Heights, which Tel Aviv uses as one of its launchpads for attacks against the Syrian soil.