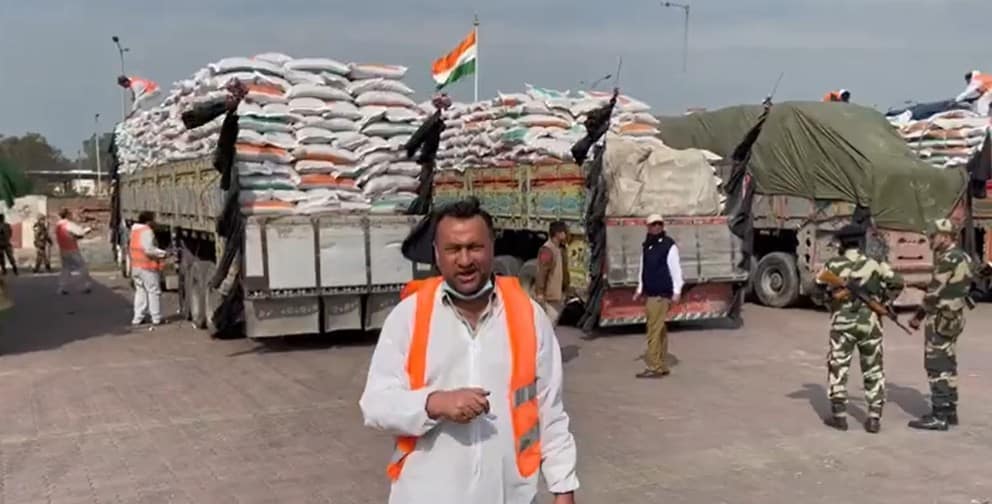 The World Food Programme (WFP) has warned of a humanitarian crisis in Afghanistan after billions of dollars of Kabul’s federal funds were frozen by the US in the wake of last year’s Taliban* takeover. The WFP has said that 95 percent of Afghans don’t have enough to eat and millions of children suffer malnutrition because of an acute food shortage.

For over 40 years hard working farmers of this nation 🇮🇳 have been sending food for the children of these proud Jihadi men, so their children won't starve to death. pic.twitter.com/ZZbntEHdOR

The Indian government on Tuesday dispatched the first tranche of 50,000 tonnes of wheat to Afghanistan, part of its ongoing humanitarian assistance to the central Asian nation, through the land route crossing Pakistan.

The humanitarian assistance convoy was flagged off by Indian Foreign Secretary Harsh Vardhan Shringla from the Wagah-Attari land border between India and Pakistan.

“We are extending our humanitarian assistance to Afghanistan, in the form of 50,000 tonnes of wheat. Today, we are flagging off the first consignment of 2,500 tonnes in 50 Afghan trucks. It’ll be delivered to the UN-backed World Food Programme (WFP) for dissemination in Afghanistan,” Shringla told reporters.

You're welcome. I also join with Afghanistan's Ambassador to thank the great government of India for sending 50,000 metric tons of wheat to Afghanistan.

According to an Indian foreign ministry release, the lorries carrying wheat are bound for the fifth-largest city, Jalalabad in Nangarhar province.

More than four & half months of wait, the first convoy of 50 trucks will start the delivery of 50,000 metric tons of wheat from 🇮🇳 to 🇦🇫 today. I thank the Indian government for the generosity displayed at a time when more than 20million Afghans are facing crisis or the worse 1/2 pic.twitter.com/qjSynbG20q

The Indian government first offered aid to Afghanistan on 7 October last year. The Taliban formally confirmed this after a meeting between Indian officials and the Islamist group’s delegates on the sidelines of the “Moscow Format” talks on 20 October.

The Pakistani government formally agreed to India’s request for free passage on 22 November during the maiden meeting of the newly created Afghanistan Inter-Ministerial Coordination Cell (AICC), a government agency responsible for coordinating humanitarian assistance to Afghanistan.

The Pakistani Foreign Office said at the time that it was allowing the Indian wheat to cross Pakistan only on an “exceptional basis” because of the dire humanitarian situation there.

Trade ties between India and Pakistan have largely remained suspended since 2019, in the wake of New Delhi’s decision to scrap the semi-autonomous status of the erstwhile state of Jammu and Kashmir.

Both India and Pakistan control parts of Jammu and Kashmir but each claims the entire region as its own.

Indian and Pakistani officials have blamed the delay in transportation of humanitarian assistance to a lack of agreement on “modalities”.

For instance, Pakistani officials reportedly told the Indian High Commission in Islamabad in the last week of November that they wouldn’t permit the wheat to be transported in trucks bearing Indian number plates.

The two sides finally settled for Afghan trucks as a means of transporting the aid supply.
However, India has still managed to supply four consignments of humanitarian supplies to Afghanistan, including 13 tonnes of life-saving medicine, 500,000 doses of COVID vaccine as well as winter supplies.

These consignments have been transported to Afghanistan via air, with the last shipment on 29 January.

Since the Taliban stormed to power in Afghanistan in August last year, India has consistently supported calls to provide humanitarian assistance to Afghans.

A joint statement released after a New Delhi-hosted meeting of regional National Security Advisers (NSAs) on 10 November not only repeated previous calls to provide humanitarian assistance to Afghans, but also demanded that it be distributed “in a non-discriminatory manner”.

The India-backed meeting on Afghanistan was attended by NSA-level delegates from Iran, Kazakhstan, the Kyrgyz Republic, Russia, Tajikistan, Turkmenistan, and Uzbekistan.
* An organisation under UN sanctions for terrorist activities.