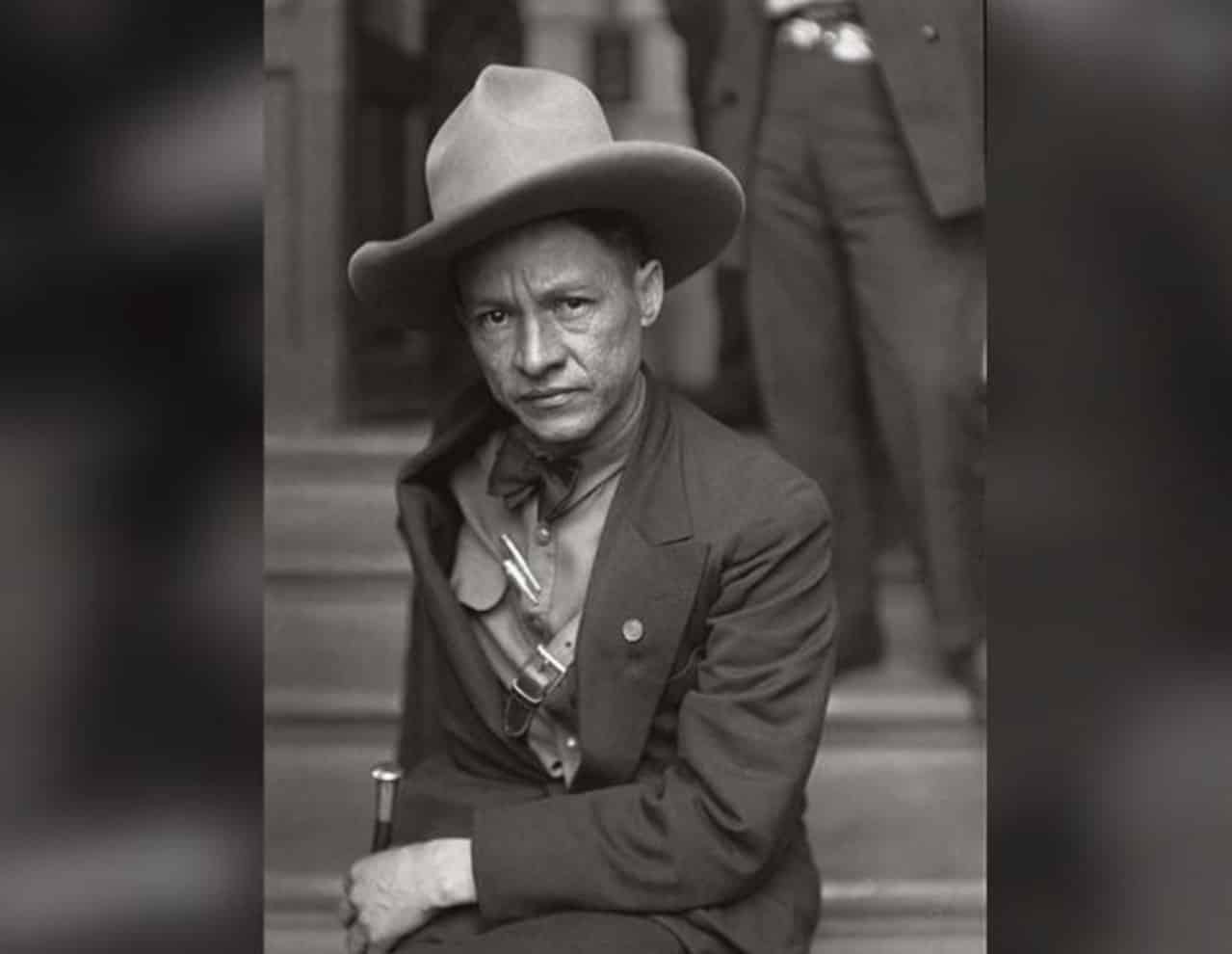 RT: Before Fidel Castro and Che Guevara, before Ho Chi Minh, and before Mao began his Long March, there was Augusto Cesar Sandino.

While Sandino is not a household name in much of the world, as these others are, he was one of the most important and successful guerilla fighters of the 20th century, successfully driving the US Marines out of Nicaragua against nearly impossible odds. His image, with his iconic Tom Mix cowboy hat tilted to one side, continues to be the most ubiquitous symbol in Nicaragua – a country led by the Sandinista Front, named in his honor.

Unlike the aforementioned revolutionaries, Sandino was not an intellectual and he was not a Marxist. Rather, he was a mechanic from a small town outside the town of Masaya, Nicaragua, and a member of Nicaragua’s Liberal Party.

Sandino was not a revolutionary by training or study; he was drawn into the armed struggle in response to the US Marine invasion and occupation of his country which began in 1911 with the goal of ousting Liberal Party President Jose Zelaya.

As the US State Department itself explains, American opposition to Zelaya stemmed from his intention to work with the Japanese government to develop a canal from the Atlantic to the Pacific coast of Nicaragua which would rival the US-controlled Panama Canal. This flew in the face of the Monroe Doctrine of 1823, which holds that the US has sole dominion over the Western Hemisphere and the right to intervene in any country therein to prevent the influence of other nations.

The US was able to put in place a succession of Conservative Party presidents to its liking with the backing of the brutal National Guard. The US was thereby able to ink a deal with the Nicaraguan government which gave the US and US companies significant control over Nicaragua’s treasury, finances, and railroad. However, this did not sit well with the Nicaraguan people who, eventually, revolted.

As the US State Department explains (in an incredible act of understatement), the US’ attempt to “prevent local management of finances … caused considerable nationalist concern in Nicaragua.” To quell the resulting unrest and civil war which broke out between the Liberals and Conservatives, the US, which withdrew the Marines in 1924, sent an even greater Marine force to Nicaragua in 1925.

It was this Marine invasion that sparked the rise of Augusto Cesar Sandino, who led hundreds of mostly peasant guerillas to repel it. As one historian explains, Sandino, who “had become a Liberal general in the civil war, launched his rebellion, sacking the US-owned San Albino gold mine and issuing proclamations against ‘Yankee cowards and criminals’ and the ‘worm-eaten and decadent’ Nicaraguan aristocracy” that served US interests.

Sandino and his forces, though not great in number and certainly not as well-armed as the United States Marine Corps, proved to be a formidable force that could neither be caught nor vanquished. Sandino soon became a legend, and “even China’s Kuomintang carried standards bearing his image.” As the late, great Latin American writer Eduardo Galeano wrote in his acclaimed ‘The Open Veins of Latin America’:

“The epic of Augusto César Sandino stirred the world. The long struggle of Nicaragua’s guerrilla leader was rooted in the angry peasants’ demand for land. His small, ragged army fought for some years against twelve thousand US invaders and the National Guard. Sardine tins filled with stones served as grenades, Springfield rifles were stolen from the enemy, and there were plenty of machetes; the flag flew from any handy stick, and the peasants moved through mountain thickets wearing strips of hide called huaraches instead of boots. The guerrillas sang, to the tune of Adelita: ‘In Nicaragua, gentlemen, the mouse kills the cat.’”

And so, in its desperation to somehow subdue Sandino and his gang of merry men and women, the US increasingly turned to the new form of warfare which it continues to wage today – the aerial bombing of town and country.

Summing up the testimony of those who lived through the US assault, one historian describes the US aerial bombings as “a remorseless faceless enemy inflicting indiscriminate violence against homes, villages, livestock, and people who, regardless of age, gender, physical strength, social status, [and who] lacked any defense except to salvage their belongings.”

According to a fellow combatant of Sandino who lived through the aerial bombing and the sacking of Ocotal, Nicaragua which followed,

“the aviation did much damage to the population between loss of life and loss of property, causing thirty-six deaths in our forces … Sandino’s troops stood to the planes as best they could, downing one enemy plane (a Fokker), and aft this the Sandinista troops withdrew, and that’s when the Yankee troops enter the already destroyed town, causing the greatest destruction, sacking the images and bells from the ruins of the church and throwing them in the river … There were hundreds of deaths here, among them children, women.”

Still, Sandino and his mostly peasant liberation army persisted, and successfully drove the US Marines out of Nicaragua in 1933, but not before the Marines were able to shore up the National Guard under the leadership of Anastasio Somoza. Not able to defeat Sandino on the field of battle, the only method left for Somoza was chicanery.

And so, on the promise of a peace deal, Somoza lured Sandino to Managua where he was assassinated on February 21, 1934. Sandino’s remains disappeared and have never been found. Meanwhile, Somoza – “a son of a bitch, but … our son of a bitch” as FDR would quip – declared himself president of Nicaragua with the backing of the United States and turned quickly to repressing Sandino’s followers and supporters.

Somoza and his son, and then his grandson, ruled Nicaragua with an iron fist (and US military assistance) for the next 45 years. However, Sandino’s example inspired the creation of the Sandinista National Liberation Front (FSLN) in 1962. The FSLN, again a primary peasant movement in a mostly agrarian society, waged a guerilla war against Somoza and his National Guard, culminating in the victory of the FSLN and the ousting of the last Somoza in 1979. But Somoza did not leave without a fight; in the end 50,000 Nicaraguans died, mostly through the aerial bombings of his own cities, reminiscent of the US bombings in the 1920s and early 1930s.

In addition, 100,000 were wounded, 40,000 were orphaned, and 150,000 became refugees. And, when Somoza fled the country, he took its treasury, ensuring that huge swaths of Nicaragua would remain in ruin from his air campaign for years to come.

The FSLN, once victorious, made sure that Sandino’s memory and legacy would be preserved. At the same time, Sandino is one of those historical figures, like Jose Marti in Cuba, which nearly all parties claim in Nicaragua. Indeed, the worst accusation one could level against a leader or activist in the country is that they have somehow betrayed Sandino and his legacy, and this charge is made often.

Indeed, it is now fashionable amongst disgruntled Sandinistas, the mainstream press in and outside Nicaragua, and amongst even the left in the US and Europe, to claim that the current FSLN leadership, including President Daniel Ortega, have abandoned Sandino’s legacy and the Sandinista Revolution. Even the dictator Somoza, before being gunned down while exiled in Paraguay by Argentine revolutionaries in 1980, made such a claim, putting out a book shortly before his death entitled ‘Nicaragua Betrayed. It is now even common in some circles to hear claims that Ortega is in fact “the new Somoza.”

As my good friend S. Brian Willson, a Vietnam veteran turned peace activist who lost his legs protesting an arms shipment from the US to Central America by train in 1987, said to me, the essential promises of Sandino and the Sandinistas have been fulfilled. And these essential promises to the Nicaraguan people were and are…

(1) independence and sovereignty in the face of the US and its attempts to determine Nicaragua’s destiny; and

(2) land reform, education, and a decent life for Nicaragua’s large peasant population. Brian, who has lived in Grenada, Nicaragua for years, knows what he is talking about.

Ortega and the FSLN have largely made good on both these promises, according to a majority of Nicaraguans. And that is why, much to the chagrin of many leftist intellectuals, Ortega remains popular in Nicaragua, particularly among peasants, workers, and the poor. Ortega and the FSLN have given many hectares of land to peasants; instituted free education and health care; put money into affordable housing for the poor; electrified the country and built up the infrastructure; and significantly reduced poverty and extreme poverty, with nearly 100% of the food Nicaraguans eat grown and raised by the peasants themselves.

The Sandinistas also kept Nicaragua free from US interference, most notably by winning the brutal Contra War of the 1980s in which the US financed, trained, and directed former leaders of Somoza’s National Guard to try and violently retake the country. The resulting conflict killed 30,000 and left the country and economy in ruin. Thankfully, Nicaragua has now more than bounced back.

I have been traveling to Nicaragua since 1987. And it was back then that I saw my first images of Sandino and learned of his fight against the US Marines. I even met an old man in Ocotal who fought with Sandino and who proudly sat on his front porch in the old uniform he wore in battle.

I have watched a country with once shocking levels of poverty and underdevelopment become a prosperous and developed society. If Augusto Cesar Sandino, who continues to look upon Nicaragua from statues and paintings, could see his country today, I believe he would be proud.

Daniel Kovalik teaches International Human Rights at the University of Pittsburgh School of Law and is the author of the recently-released No More War: How the West Violates International Law by Using “Humanitarian” Intervention to Advance Economic and Strategic Interests.