JEA: I have said over and over that saying that Russia is invading Ukraine is like saying that the United States is invading California. This recent article gives some good reasons as to why this is the case. 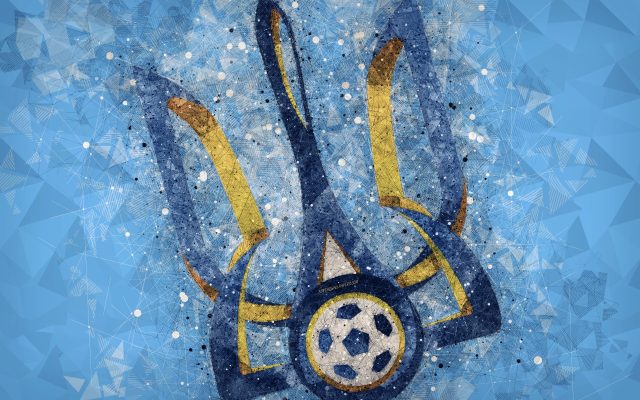 What is Ukraine? This is a difficult question. Russia was born in Kiev.

The first historic Russian empire was Kievan-Rus, which was founded by the Vikings and King Rurik, who sailed from the Baltic Sea through the rivers Daugava and Dnepr down to the Black Sea and Constantinople.

In 882 CE they made Kyiv the capital of the first Russian kingdom. The Mongols put a final end to Kievan-Rus in the 13th century, but the Rurik dynasty then ruled from further north, in what was in the 15th century still just a small principality around another river city called Moscow. Only in 1598 did the ruling Ruriks die out in Moscow where they were succeeded by the Romanovs.

Ukraine did not exist as a country for hundreds of years and was only revived (or created) after the Russian Revolution in 1917, just 105 years ago. Immediately after, Ukraine was absorbed again, by the Soviet Union and only reappeared once as an independent country again nearly by accident only 31 years ago in 1991, when Russia’s Boris Yeltsin got Ukraine’s Leonid Kuchma hooked on the idea of dissolving the Soviet Union in a coup declaring Russia and Ukraine independent.

For hundreds of years, Ukraine was run by Lithuania, Poland, Sweden, the Mongols, Turks Austria-Hungary, and Russia. There are few geographical boundaries in the vast plains in the easternmost parts of Europe, so armies and ravaging hordes have always been able to roam freely for thousands of years. First on horses. Later in tanks.

Most of the armies of Carl Gustav, Peter the Great, Napoleon, and even Hitler and Stalin crossed these enormous distances on foot. In just the last 105 years, Ukraine’s borders, language, and identification have changed several times.

More-often-than-not than marked variations in culture, language, and conscience between the various parts of what at any given time in history was identified as Ukraine. 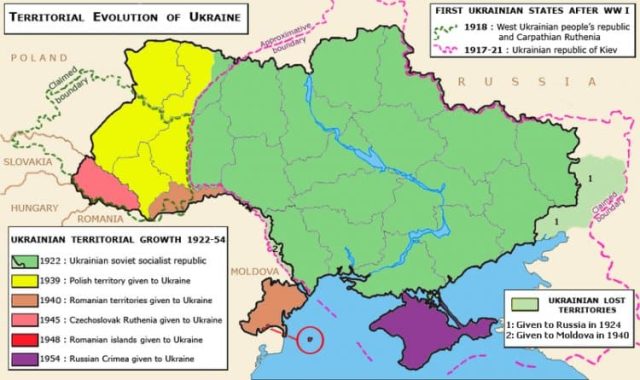 Crimea was part of Russia during Soviet times, and only “transferred” to Ukraine as an autonomous republic in a symbolic gesture as late as 1954. The yellow area on the map fig. 1 in Ukraine’s westernmost part is important also today. The area marked in yellow was until World War I ruled by Austria-Hungary, and its regional capital Lviv then had the German name, Lemberg.

Ultra-fascist Ukrainians influenced by Nazism in Germany in the West killed Poles, Lithuanians, Jews, and Russians who were seen as “un-Ukrainian”. It was also in this western part of Ukraine where Hitler recruited Ukrainian Nazis for SS Division Galizien during World War II. SS-leader Himmler was very careful to make sure that the Ukrainians he recruited for SS were extremely fanatic and loyal to Hitler in their Nazi convictions.

Even as Germany was losing World War II, the Ukrainian SS Nazis kept fighting loyally for Hitler, even on retreat all the way back to Berlin. Only a few weeks before Hitler shot himself in May 1945, did the Ukrainian SS-Nazi soldiers (on paper with SS symbols!) suddenly declare that they were now anti-Communist “freedom fighters” for Ukraine.

The USA probably very soon discovered their potential against Russia, right after World War II, thousands of these SS Ukrainians were discretely sent to Canada, where they formed a community and whitewashed their Nazi past.

The Abuse of Ukraine

After the (re) creation of Ukraine in 1991, Ukraine’s Nazi elements resurfaced as neo-Nazi and extreme right-wing political movements, again in Western Ukraine. I have seen plenty of research on this, and I here refer mainly to the scientific research of Prof. Per Anders Rudling from the University of Lund in Sweden.

As the existence of Ukraine, today is partly a coincidence, and Ukraine never had a unified nationalist movement or identity, these far-right forces have in the past decades been active in efforts to “write”, “design”, and invent a new “old” history of Ukraine, to create a “common” sense of “nation” for all of Ukraine.

Nazis and far-right-wing groups supported by the US and then-Vice President Biden and Victoria Nuland were active as violent stormtroopers during the Maidan coup in Kyiv which in 2014 toppled Ukraine’s democratically elected president Yanukovych. In subsequent “free” elections the political parties which represented eastern Ukraine’s mainly Russian-speaking population were banned or criminalized. 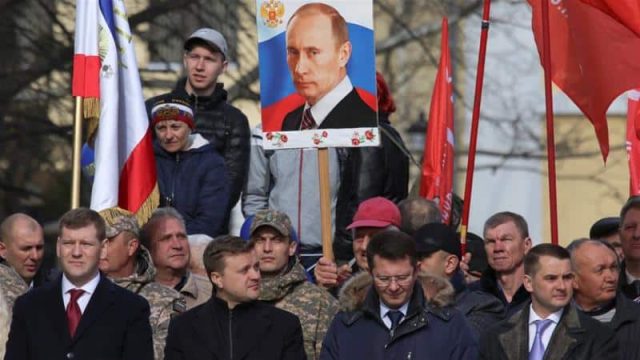 The Abuse of Russia

It was about personal power. Better be number one in an independent country, than number two in a union of countries. The economy collapsed in Russia. Using Maddison Data, I calculated in 2016, that Russia’s living standard in the period under Yeltsin fell by 5.3% every year from 1991 to 1999.

Compared to the time in the Soviet Union, Russian living standards fell by about one-third. Probably millions of people died prematurely of undernourishment, lack of medical care, and alcoholism.

For Russia, the 1990s became a decade with one of the worst declines in living standards for a developed country ever in peacetime. US ultra-liberal economists and the CIA ran Russia. Russian Nazis emerged. Russian Nazis took turns with old-time Communists, as they demonstrated on the Red Square and across Russia.

Meanwhile, because of US-designed privatization policies, oligarchs took over Russia’s biggest companies. The Russian Navy rusted, and army officers were not paid. Meanwhile, the US courted Boris Yeltsin in the White House. As Gorbachev once said: Only when Russia is weak, does the US love Russia.

To make matters worse for Russia, jihadists and other insurgents started a war in Russia’s Caucasus region. This war cost Russia 60,000 lives. Russia also faced several deadly incidents of terrorism including in a school and in a theatre and the destruction of the regional capital Grozny. Terrorist activities inside Russia are easy to support from forces operating in neighboring countries like Ukraine and Georgia.

After the Fall of the Berlin Wall, Russia gained an understanding from the USA that NATO would not expand eastwards, and at any rate, not into parts of the former Soviet Union.

Soon the US forgot that and expanded NATO with the three former Soviet Baltic Republics, with Poland, Hungary, the Czech Republic, Slovakia, Romania, Bulgaria, and so on. After the dissolution of Yugoslavia, Russia was allowed by the West to participate in peacekeeping, but right from the beginning, Russia was marginalized.

Tensions increased. In 2003, Edvard Shevardnadze, who was on working terms with Russia, was democratically re-elected as leader in Georgia. In a US-financed and organized “color revolution”, Shevardnadze was toppled in a coup, and replaced by the US-friendly but deeply corrupt Saakashvili.

This was a further deterioration for Russia. The turning point came for Russia when Saakashvili started a war against the Russian population groups in Georgia while Russia’s President was being treated with champagne by the US President at the Olympic games in far-away Beijing in 2008.

The final disillusionment of Russia with the West came in 2014 with the US-engineered Maidan coup which toppled the democratically elected but Russia-friendly president Yanukovych in Ukraine. Immediately after this, Russian-speaking Ukrainians were targeted by the new government in Kyiv, and Russian-speaking insurgents rose in Ukraine’s eastern Donbass region. 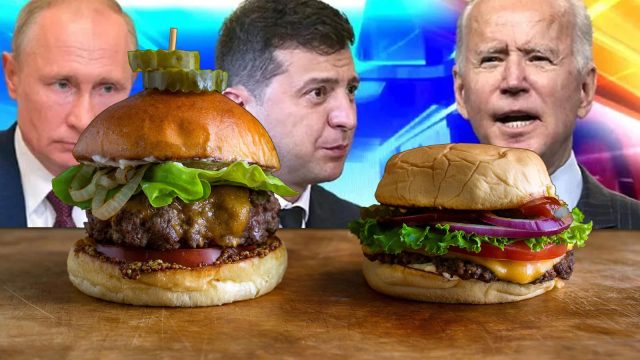 Geopolitically, Ukraine is very sensitive to Russia. From Ukraine, there are only 440 kilometers to Moscow. If Crimea had not voted to become Russian, Russia’s Navy would have lost a foothold in the Black Sea.

From Ukraine, it is very easy to work inside Russia. As mentioned above, after 1991 Russia suffered from internal wars and terrorist attacks – and terrorist activities inside Russia are easy to support from forces operating in neighboring countries like Ukraine and Georgia.

Therefore, it was the last straw for Russia, when NATO decided in 2008 that Ukraine and Georgia should become members of NATO with a NATO Membership Action Plan (MAP). NATO’s decision to give membership to Ukraine and Georgia was reiterated at the NATO summit in 2021. Russia is therefore under hard pressure to act.