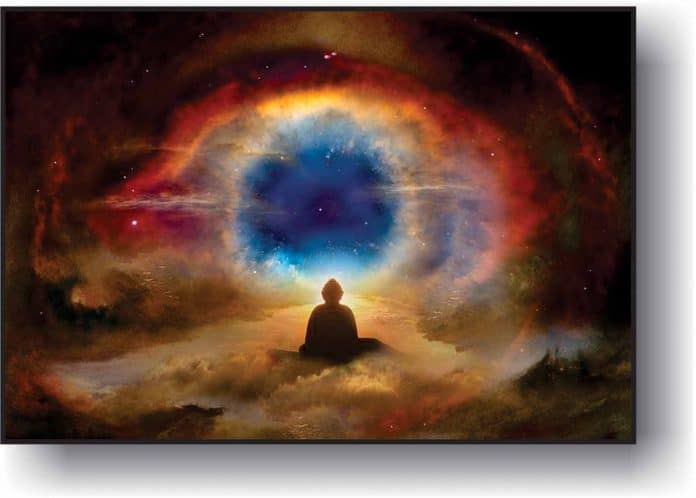 by Mike Kay, with the Jack Heart Blogspot

The purification ritual continued into the night, led by the confident apprentice of Ghost Horse. The inside of the squat, dome-like structure was utterly, completely dark, but for the faint red glow of the heated rocks that filled the central pit. I felt the heat they radiated, and heard, rather than saw the transformation of clear stream water to steam, as the wooden ladle poured its contents over the stones.

The water upon the rocks filled the small structure with stifling heat, rolling across my form like fire. I sank to the bare earthen floor.

The soft chants had gone silent. I felt a change, almost electric. My right arm extended into the heat, a gesture of recognition. They floated there, across the open floor of the box canyon. I saw with eyes beyond the physical as they stood there, perfectly visible in the landscape, outside the structure, which had become transparent to me.

Later in life, I was shown a series of images, from a pictographic panel somewhere close to Dark Canyon, where the Lightning Ones were painted by an anonymous hand so long ago, their ancient images upon the stone.

This is how the maps of the numinous are made, and it is from such maps that genuine religions are informed. This was the essence of Gnosticism, where experiential mysticism built an image of a navigable living cosmos. This was the religion of the Megalith builders, and this informed the reverence of the ancestors for all things divine.

That nothing here is even close to the experience and worldview of today’s modern western religions should be immediately evident. The big three, Judaism, Christianity, and Islam have long ago surrendered whatever immediate contact to the numinous they could claim. Rather, they offer a watered-down version of experience for their faithful, one in which the cognitive worldview held so dear, is never truly challenged, and the wild power of the numinous is never ever allowed free rein…

The Demiurge is in fact the cosmic organizer, a spiritual principle, a liminal power. The Demiurge is the intelligence that weaves the visible world from the echoes of eternity, not from an inner genius, but from one fleetingly perceived.

Thus it is that the hand of the Demiurge is invisible. The cosmic Organizer works according to higher principles, and to the degree, these principles are mimicked, is the degree to which divine beauty is revealed in all of nature. Yet all of the organizers’ architecture is an interpretation, a flawed memory, a lesser reflection…