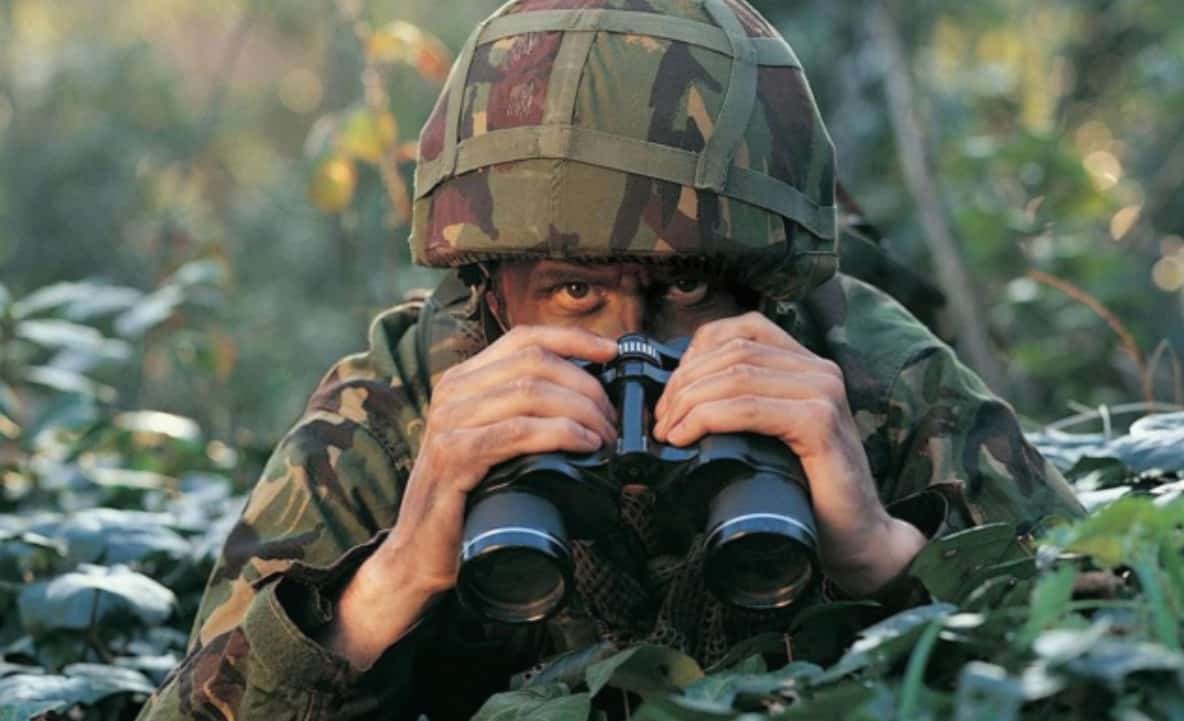 So, my friends, it has begun. This is exactly what both patriots and liberals are now shouting from every soldering iron. Patriots look a little wider and claim that all this “began” eight years ago, and now it must end. Out of habit, their opponents blame everything on the “bloodthirsty” Putin, in principle, without bothering to search for the prerequisites for what is happening.  f.Lomaster

Let’s not “dance” from Adam and Eve. The current phase of actions, which led to tragic events, primarily for Russia, started with Vladimir Putin’s statement to our Western “partners” about the security threat to Russia associated with the creeping expansion of NATO. It was from this attempt to resolve the matter amicably that the “retaliatory actions” of the Westerners began. However, Russia did not expect a positive response to its well-founded demands. But according to an old tradition, she was obliged to announce “I’m going to you”.

But enough of the historical digressions. How events developed further and why I call the war “invisible”.

All media controlled by the West (mind you, I do not say “USA”) launched an information attack, inflating the topic of the imminent “invasion” of Ukraine. At the same time, specific dates were repeatedly called. Where did they come from?

On the night of February 4-5, Bloomberg “erroneously” published an “intrusion” message, later deleted it, and apologized.

Why did a respected agency put such a headline, and YouTube blocked the channels of the DPR and LPR the day before? Where were the correspondents sitting with their cameras turned on at that time?

But let’s move on.

Joe Biden warned of a possible invasion on February 16th. The same date was named by the Spiegel newspaper and specified by the British media The Sun (one in the morning British time) and The Mirror (three in the morning local time).

On February 15, the Russian Ministry of Defense announced the start of the return of troops and equipment from the Western and Southern military districts from the exercises.
There was hope for a peaceful solution to the problem.

February, 15. A terrorist attack was prevented in the center of Lugansk.
February 16th. Around 20:30, residents of the village of Luhanske heard one explosion in the distance.
Then it was reported that something exploded behind the line of demarcation. Question: What didn’t the terrorists bring to Donetsk?

Information is being published about a possible gas attack by the Armed Forces of Ukraine.
On February 18, the evacuation of civilians from the conflict zone begins. Even eight years ago, no one was evacuated. This means that reports of a gas attack were not a “duck”.

But there was no gas attack. Again nothing happened.

Further, the fighting on the part of the Armed Forces of Ukraine is on the rise. Shells fly not only to the territory of the DPR and LPR but also to Russia.
And again, Russia is silent, trying to give time and opportunity to change their minds.

On February 22, Putin, after a long meeting with ministers, decides to recognize the DPR and LPR as sovereign states.

The firing on the demarcation line subsides. Everyone rejoices and celebrates.

But such a simple solution is not in the plans of the puppeteers. The next day everything is back to normal. And the shelling resumes with renewed vigor. Moreover, there was no Russian army on the territory of the Republics, and no. Why? Yes, it’s very simple: it was Russia that gave the last chance to do without war.

But, apparently, intelligence does not console. The West decided to leave Ukraine to Russia but first slam the door loudly.

Look at this map.

It is led and commented by Alexey Zhuravko . 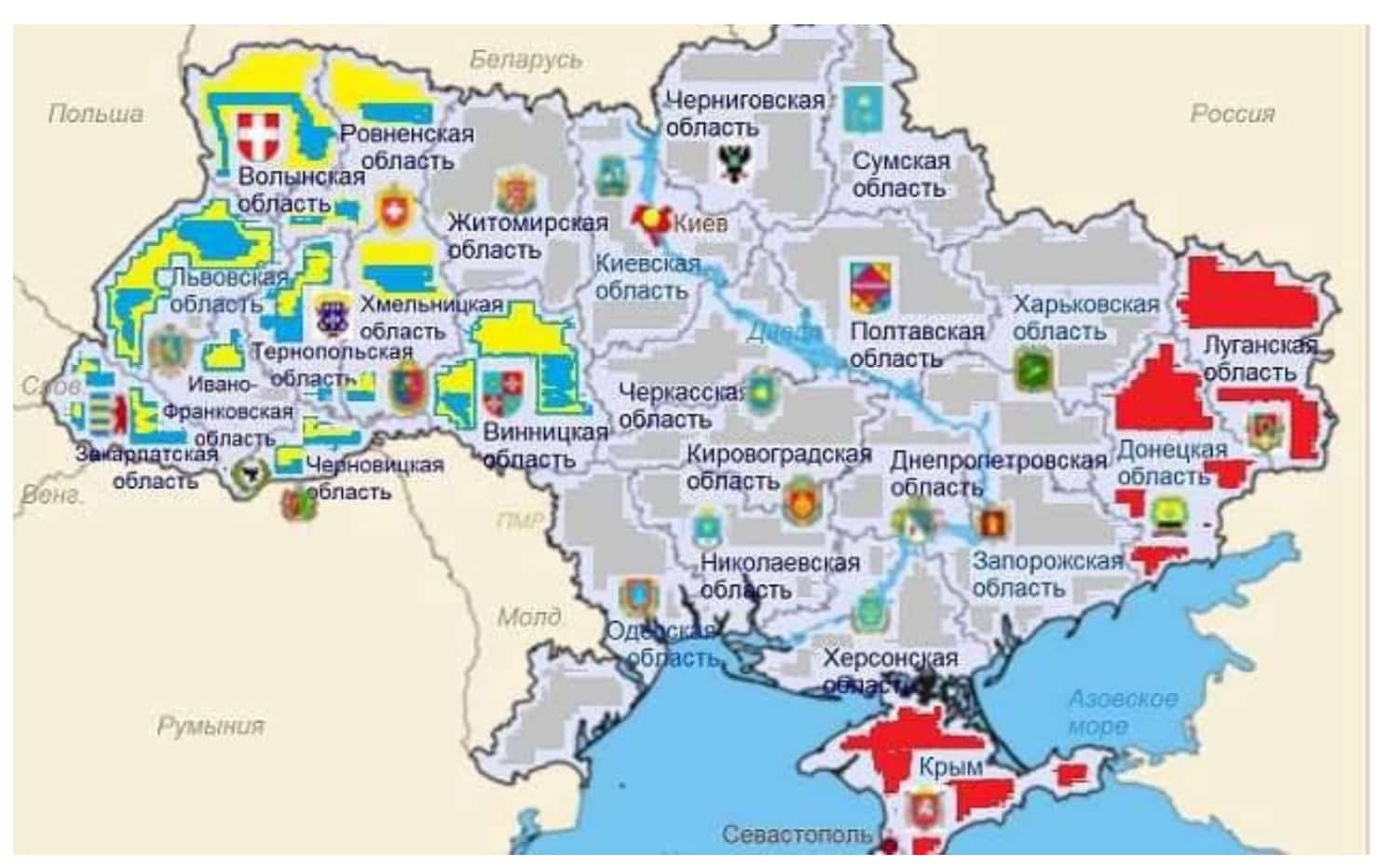 The Ukraine project shrinks down to a few western (and frankly Western) regions. The very ones where the events took place back in January-February 2014. The capital is Lviv.

Marked on the map in blue and yellow.

The gray zone is the territory of “maximum chaos”, stuffed with weapons and detachments named after “Old Man Makhno” – to create maximum problems for the “aggressor”. Neither the Banderlogs nor the United States hopes to keep them, so at least to spoil them as much as possible.
In red, I marked those that have already retreated, or will soon retreat to Russia, in one form or another.

And the last “icing on the cake” of February 23:

The Rada adopted in the first reading bill 5708 on the circulation of weapons, which gives the right to own civilian firearms.

That’s it, the puzzle is complete. Now reports of mining chemical plants are no longer surprising. And, perhaps, Pan Ze, arguing that the Armed Forces of Ukraine are not conducting any military operations in the Donbass, is simply no longer in control of the situation. Western sponsors decided that it was cheaper to fund a hundred different gangs with weapons that would appear to them instantly after such a decree.

Russia has finally responded. And so quickly and precisely that there was no doubt: the scouts worked their best. I would also add: again, something did not happen. And, most likely, this time the account would have gone into the millions. Lives, not dollars, which our Western “friends” love so much.

And that is not all. Look at what objects were occupied by Russian troops among the first. This is a channel to the Crimea and … Chernobyl. In which, for a moment, there are 20 thousand cubic meters of liquid radioactive waste. And let’s remember Ze’s words about “nuclear weapons”. Yes, it can be like that. And a canal carrying millions of tons of water can be easily poisoned with just one test tube.

But nothing happened again.
Let’s say thank you for this.
Someone. Who we don’t see.