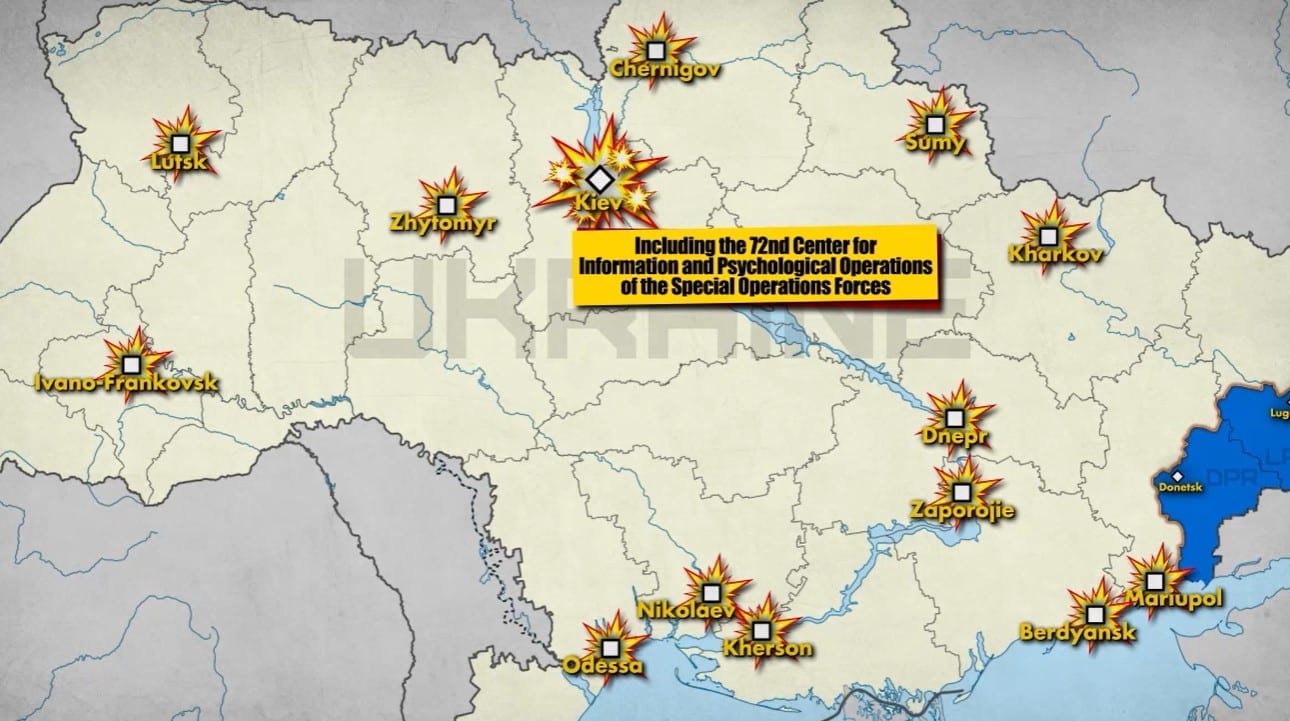 VT has seen evidence that special operations forces of the Kiev regime, aided by Nazi militias, have begun murdering Ukrainian civilians in hopes of getting the West to step in…

They may even seek to deploy the White Helmets….

On February 24, Russia kicked off a peace enforcement operation in Ukraine. The decision was announced in a televised speech by President Vladimir Putin. He emphasized that the main goal is demilitarization and denazification of Ukraine, and protection of civilians from the Kiev regime.

The Russian Armed Forces immediately conducted a massive strike with precision weapons on military and command infrastructure of the regime all across the country. The Ukrainian navy, air force and air defense forces were in fact put out of actions within a few hours.

Some military facilities near Kiev, including the 72nd Center for Information and Psychological Operations of the Special Operations Forces, were also hit. The precise strikes on military infrastructure continue.

At the same time, the Russians launched a ground phase of the operation advancing in the south and north-east of the territory controlled by Kiev. The most active actions took place in Kherson region, where Russian troops took control of Kakhovka Hydroelectric Station and Kharkov region where the Russian troops have started entering the provincial capital after brief clashes with Kiev forces. Additionally, Russian troops were spotted near the town of Putivl in Sumy Region.

The Russian Defense Ministry reported that Ukrainian border guards did not show any resistance and many members of pro-Kiev formations have been laying down arms.

Forces of the Donetsk and Lugansk People’s Republics launched their own advance. Such settlements as Schastye, Stanytsia Luhanska, and Lopaskino have now been liberated. Local sources claim that many UAF military formations have been pushed back from their positions. The staff of the 53rd Brigade is hastily withdrawing from the city of Volnovakha.

Developments on the ground demonstrate that the command structure of Kiev forces were effectively neutralized as Ukrainian troops do not demonstrate effective resistance. In these conditions, the Kiev regime has already turned to the strategy of terrorist attacks on civilian infrastructure.

According to reports, SBU operatives planted bombs in the Adveevka Coke and Chemical Plant. The special service probably plans to blow it up causing an ecological catastrophe in the region with the goal to blame Russia.

In own turn, the Ukrainian Defense Ministry remains spreads own version of reality. It denied almost any setbacks and claimed that it delivered a powerful blow to the Russians. At least six Russian warplanes and two helicopters were downed according to these claims.

The administration of President Zelensky shows little signs of understanding the reality. He claimed that he powerfully negotiates with Western leaders to ‘create an anti-Putin coalition’.

Kiev has broken diplomatic ties with Russia, introduced martial law and declared mass mobilization. Nonetheless, it does not look like it will really help. The Kiev regime is in its final days.