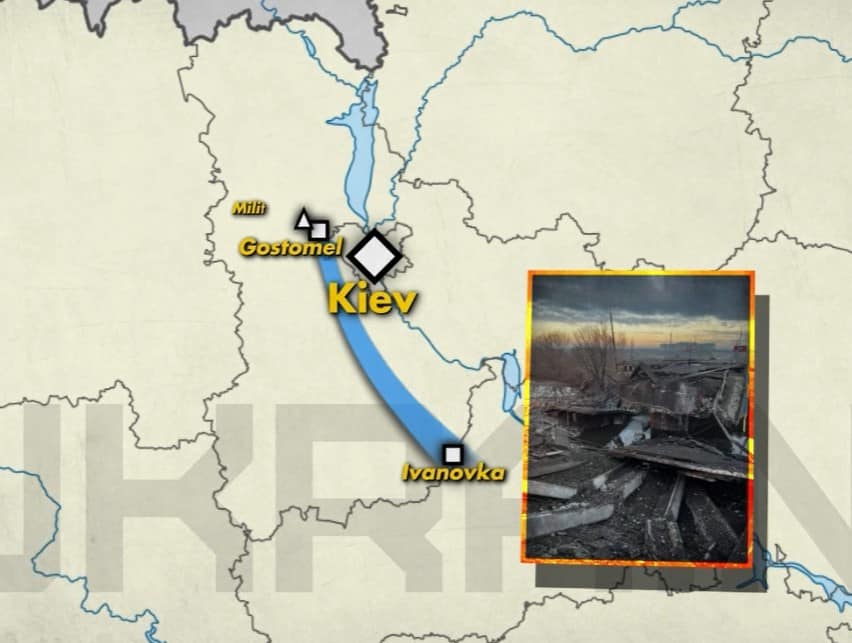 The second day of the Russian peace enforcement operation in Ukraine started with a new round missile strikes on military infrastructure and forces belonging to the Kiev regime. Among other targets, strikes once again hit military objects around Kiev.

The regime officially confirmed that it was blowing up bridges to stop advancing Russian forces. One of these incidents took place near the town of Ivanovka southeast of the capital. The group of forces moving there are likely aiming for the town of Gostomel and its military airport.

Earlier, on February 24, a group of Russian paratroopers supported by military helicopters blocked the work of a military facility after a successful air landing operation. Since then, the paratroopers have been involved in heavy fighting with the superior forces that guard the Ukrainian capital and its surroundings.

Panicking air defense units of the regime even downed an allied Su-27 warplane by mistake. Initially, Ukrainian officials and the MSM tried to present this as a case of ‘defeating the Russian Air Force’ but photos showing vestiges of the plane in Ukrainian camouflage forced them to change the story.

The military situation remains complicated in the east and northeast of the country. Over the last few years, the Kiev regime has been burdening these regions with hardcore Ukrainian nationalist and neo-Nazi elements. These well-armed units put up fierce resistance against the Russian Armed Forces.

As of the morning of February 25, the city of Kharkov remained in the hands of these forces. Kiev’s troops openly deploy their military equipment, including rocket artillery, near civilian targets and use civilians as human shields. Initial reports, that the city was fully blocked by Russian troops have not been confirmed so far.

Intense clashes between the Russians and pro-Kiev radicals were reported in the city of Sumy. Both sides reportedly suffered casualties.

Mariupol also remains in the hands of the Kiev regime. Radicals fortify the city and block civilians from leaving it. There are reports regarding the killing of civilians who tried to leave through check points belonging to pro-Kiev forces. Kiev’s troops create fortifications in the apartments of multi-story buildings and take civilians there as hostages.

In the Donetsk and Lugansk regions, people’s militias of the Donbas are slowly suppressing the multilayer defense created by Kiev in the past few years. Local sources report that they plan to block Mariuplol from the northern and eastern directions.

Meanwhile, the regime’s defenses collapsed in the regions near Crimea. Forward Russian units outflanked Kherson city and are advancing towards Nikolaev. Another group of the Russians took control of Melitopol and is securing the area before further operations.

The fight for the future of people living in the territory of modern Ukraine has reached a milestone. The Russians have come to put an end to the terrorist regime established there. Nonetheless, the criminals backed by NATO are not going to surrender easily.