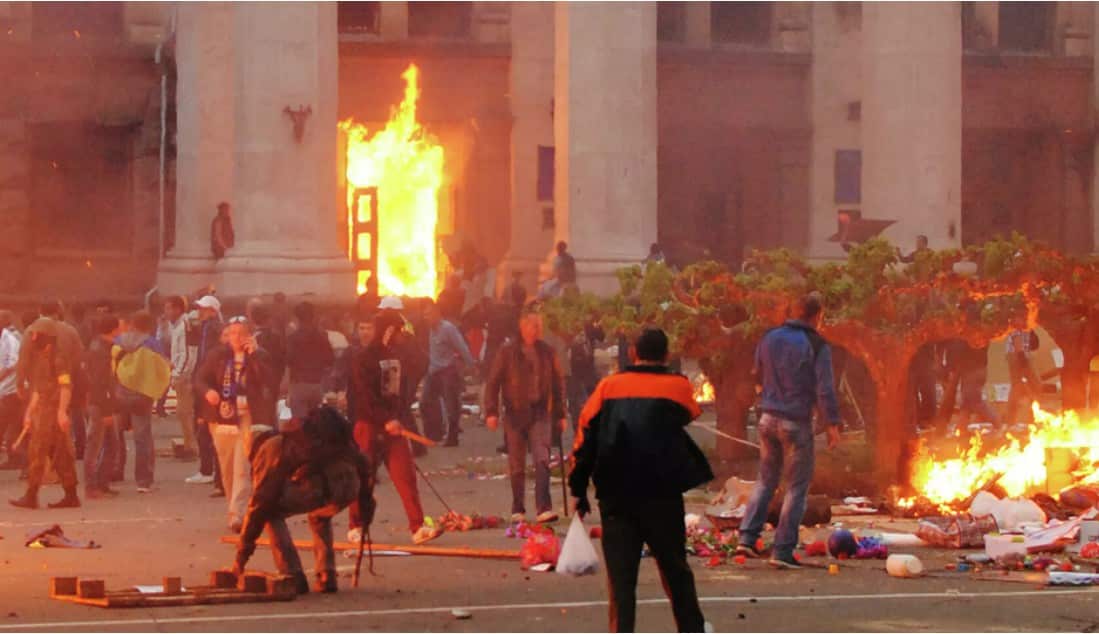 When Russian President Vladimir Putin was announcing the start of a special operation to protect the Donetsk and Lugansk People’s Republics (DPR and LPR) on 24 February, he described the goals as “demilitarising and denazifying” Ukraine. His spokesman later elaborated that “denazifying” means that Russia is planning to free Ukraine from neo-Nazis, their supporters, and their ideology.

Moscow has repeatedly warned foreign nations about neo-Nazis taking control of Ukraine following the West-backed coup in 2014. However, Western nations chose to ignore the human rights violations committed by the Kiev regime.

What were these crimes?

Setting Trade Unions House on Fire…. With People in It

As nationalists and neo-Nazis were illegally seizing power across the country, they faced opposition from the so-called “anti-Maidan” movement, which was against the coup. Clashes between neo-Nazis and anti-Maidan protesters took place across the country, but what happened in Odessa on 2 May 2014 would be remembered as one of the darkest pages in Ukraine’s history.

Following street fighting with neo-Nazis, the anti-Maidan protesters barricaded themselves in a local trade unions house. Their opponents, backed by the new Ukrainian authorities, encircled the building and set it on fire using petrol bombs. When the blaze erupted on the second and third floors of the building, several hundred people trapped inside desperately tried to escape. 10 of them fell to their death. 32 more died suffering from severe burns and suffocating from smoke. 250 others managed to escape the death trap with various injuries as firefighters arrived at the scene an hour after the blaze broke out.

Apart from deploying regular troops to shell the cities of the DPR and LPR, the new Kiev leadership attracted several so-called “volunteer battalions” – ragtag groups of people, often nationalists and ex-convicts, funded and equipped by Ukrainian oligarchs and businessmen with connections to the new government. Their members were often involved in various war crimes – ranging from looting to killing civilians and rape. One such battalion, dubbed “Tornado”, was disbanded in December 2014 by Kiev following numerous reports of its crimes, but its members were never prosecuted, with many of them moving to other battalions.

The crimes of another notorious voluntary battalion, “Aidar”, were investigated, documented, and exposed by the Amnesty International non-profit. Nonetheless, its horrific deeds would remain unpunished. One of the many crimes was uncovered by the DPR militia near the “Kommunar” mine, where they unearthed the bodies of four women and several men – all of them civilians. They had been tied up, tortured, and either executed by gunshot to the head or beheaded. One of the women was believed to have been raped by the battalion’s fighters.

Illegal Persecution, Incarceration, and Killings of Opposition Members and Journalists

The nationalists and neo-Nazis sitting in the government in Kiev also have a rich history of violating human rights and committing crimes – many of them meticulously gathered in an 80-page-long White Book assembled by the Russian Foreign Ministry. By mid-June 2014 – less than five months after seizing power – the new Ukrainian authorities started infringing on people’s rights to express their opinions and on press freedom, conducting searches and detentions of protesters, journalists, and blocking foreign media members from entering the country.

The new Kiev authorities also did not shy away from threatening and kidnapping political opponents – politicians and even lawmakers who opposed the war against the DPR and LPR, and those who objected to the coup. Some of the opposition politicians and independent journalists were also killed, allegedly by the same nationalists and neo-Nazis, with many cases remaining unsolved to this day.

The murder of Oles Buzyna, a Ukrainian journalist known for his pro-Russian views, is among the most prominent cases. Buzyna was shot dead outside his home by unidentified individuals in Kiev just a day after the killing of ex-MP Oleg Kalashnikov in his home. The cases were never solved, but they are believed to have been related to the victims’ involvement with the anti-Maidan movement.

Discrimination Against Anything Russia-Related

In addition to allowing war crimes to go unpunished and hunting down their political opponents, the Ukrainian leadership often appeased and encouraged countrywide discrimination against anything related to Russia or the Russian language.

This policy revealed itself in various forms: from relatively harmless calls to refrain from buying Russian goods to the firing of Russian academics teaching Russian literature, detention of Russian-speaking travellers without legal grounds, official bans on certain Russian products, drawing of swastikas on memorials to the Second Wold War and victims of the holocaust, and allowing neo-Nazi marches featuring calls to “kill Russians” living in Ukraine. The new authorities also banned large categories of Russians, many of whom have relatives in Ukraine, from entering the country, thereby infringing on their freedom of movement and separating families.

This list goes on with many more crimes that were committed by Kiev’s nationalist leaders over the past eight years but are not reflected in the White Book.