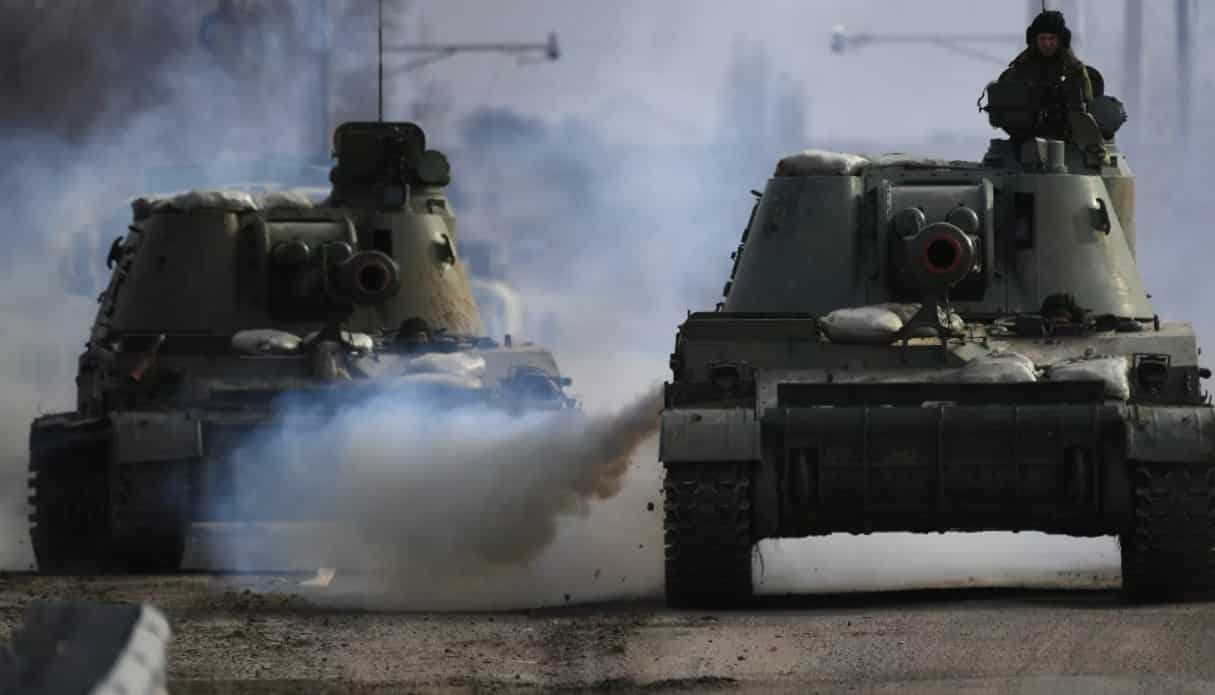 As Russia launched a special military operation in Ukraine in order to protect the Donbass republics and demilitarise the country, which seeks to join NATO, two major Asian powers, China and India, have remained cautious in taking sides. An expert reckons the crisis will send a ripple effect in Europe and shape a new order in the Asia Pacific.

Dr. Zorawar Daulet Singh, a Delhi-based historian, strategist, and author of a recently released book ‘Powershift: India–China Relations in a multi-polar World’ has deliberated about NATO’s future and the ripple effect of the Russia-NATO row over the Indo-Pacific while talking to Sputnik during an interview.

Sputnik: In a broader context, how do you assess the developments in Ukraine, which Russia says is an attempt to prevent a global war?

Dr. Zorawar Daulet Singh: This point has been raised by President [Vladimir] Putin on several occasions recently, when he said the possibility of a major confrontation between Russia and US-NATO would have taken on a very different meaning had Ukraine already been a member state of NATO. Putin even raised the spectre of a nuclear crisis in the hypothetical scenario of Ukraine inside NATO’s tent.

As we have seen from 2014 onward, the US has made a concerted attempt to convert Kiev to a frontline state. By that, I mean a state that builds exclusive military-strategic linkages with the West, undermines Russian security and extends the US sphere of influence right up to Russia’s border.

This worrying development since 2014 led to a counter-reaction by Russia. Firstly, that counter-reaction led to the integration of Crimea after the referendum of its predominantly ethnic Russian population to join mainland Russia.

What Russia has now done through its ongoing military operations is it has preempted the very possibility of Ukraine ever becoming a member state of NATO – by not only carving out territories that will now become independent states but also by positioning formidable military capabilities on Ukraine’s frontiers that can impose extraordinary pressure on the US-NATO should they choose to subsequently respond to this particular military operation in a way that attempts to resuscitate the rump state in Kiev.

In that sense, what Russia has done is it has escalated to de-escalate. It has escalated the crisis to put a permanent halt to NATO’s ambition to keep relentlessly expanding.

In the next few weeks, if not days, the ball will eventually go back into the US court, and Washington will need to make a call on what to do.

Are they going to negotiate with Russia for a new security order, or will they continue the old game of Russian containment? The latter has proven to be a self-defeating policy because it only produced insecurity in the European continent and also led to an erosion of US hegemony in the international system. The past decade makes it clear.

If the US cuts its losses and stabilises the great power competition with Russia, I think everyone will be better-off: in Europe, Washington, Moscow and elsewhere in the world.

Sputnik: The US and its allies like Japan and Australia have imposed sanctions targeting the military and economic sectors. Do you think sanctions are the correct way to deal with the crisis, as Russia has faced multiple sanctions in the past too?

Dr. Zorawar Daulet Singh: Unilateral sanctions are not seen as legitimate by most non-Western states. We often hear the argument that imposing economic costs on Russia will persuade it to take a different course.

Yet, what we have seen is that the containment of Russia, including economic containment, has actually been going on for a lot longer and far before this crisis in Eastern Europe had started playing out.

From the Russian perspective, the Western policy is not actually aimed at changing Russian behaviour in a particular case but it’s part of a more radical containment geo-strategy to keep Russia weak, isolated, and separate from its traditional economic partners in Western Europe like Germany and France.

For example, in the case of the Nord Stream 2 pipeline connecting Russia with Germany, there have been recurring attempts much before the Ukraine crisis to try and block out Russian gas to Germany and replace that with US LNG exports to Europe.

Of course, the US does not possess the production capacity to replace Russia. But there is an element of geo-economic competition playing out there as well.

On the whole, since 2014-2015, Russian policymakers have come to accept that economic sanctions are an acceptable cost to bear when it comes to core security and geopolitical interests. I think they are going to ride it out and they have ridden it out.

Indeed, sections of the Russian elite see sanctions as an opportunity to reorient the Russian economy towards more domestic innovation and rebuilding parts of the industrial economy that has enormous potential given Russia’s human capital in science and technology.

Over time, sanctions could actually have the opposite effect. It leads to a stronger Russia that is more self-reliant, and we hear that specific sectors have already acquired that level.

At any rate, for sanctions to indeed have an impact on any state, the entire world must unite, that is, all the major economies. In this case, China and India are not likely to buy into any sanctions that emerge unilaterally and do not have the sanction of international law.

Even Germany and other economies in Western Europe will not sever all their connections with the Russian economy.

Sputnik: How do you view the responses of China and India? Will western countries buy into the arguments made by the two countries?

Dr. Zorawar Daulet Singh: Ironically, China and India do have similar opinions on the Ukraine crisis. These Asian powers have their own reasons for cultivating and maintaining a deep partnership with Moscow. Both India and China value the strategic partnership with Russia.

For China, it provides strategic depth and stability to counterbalance the US in the Western Pacific and, more broadly, in the international system.

For India, Russia has always played a critical role as a reliable great power friend in an uncertain world – whether to manage China’s rise, offset the old US-Pakistan alliance, insurance against US-China duopoly, and develop India’s military strength.

For Delhi, Moscow is a key pillar in a multi-polar world and, as we have seen, indispensable to any security architecture.

So it is natural that India and China are going to respond to the Ukraine conflict in a measured and restrained way.

Of course, both Delhi and Beijing strongly believe in the concept of sovereignty and territorial integrity but both also see the lead up to this crisis as very much part of a complex history where it was a relentless encroachment by NATO after the end of the Cold War deeper and deeper into Eastern Europe and up to a point where it was poised to acquire a member state literally at Russia’s doorstep.

There does seem to be a degree of empathy and geopolitical understanding that Russia has legitimate security interests, with both Delhi and Beijing recognising the deeper causes and provocations that preceded Russia’s military intervention in Ukraine.

As for western countries, whether they like it or not, these are two important sovereign powers in Asia and they are certainly not going to adopt foreign policies simply to please the West.

India has a different level of relationship with the US and the West than China does. I do not see the US succeeding in using the Ukrainian crisis to diminish Indo-Russian relations or alter them in any significant way. That simply won’t happen.

More broadly, India’s strategic establishment – driven today largely by pragmatic and realistic precepts – understands that great powers will intervene in their peripheries.
Indians have also seen interventions by the US in far-flung regions of the globe that went beyond any normal definition of security and threats.

This idea of getting India to bind by certain principles and adopting an anti-Russia stance will not have much of an impact in New Delhi.

Sputnik: How will this crisis impact the Indo-Pacific region as we see the US forming new alliances such as Quad and AUKUS in this region?

Dr. Zorawar Daulet Singh: What will be the ripple effects and repercussions of the Ukraine crisis in the rest of Eurasia and the Indo-Pacific? This is a significant question and should occupy policymakers in Washington today.

The notion that the US could pursue a policy of containment towards Russia at the same time pivot towards Asia and the Indo-Pacific to manage a rising China and to ensure that Asia does not fall under the sway of a new rising power has been the great delusion.

Such a level of ambition was becoming simply unsustainable because the power gap between the US and the rest has been narrowing over the past decade.

The US should now ask itself whether further confrontation with Russia undermines its broader strategic goals in Asia – the managing of China’s rise.

If the US doesn’t accept the reality that we are now in the multi-polar world order and that the US and Russia shouldn’t engage in this level of confrontation because China ought to be at least taking a far more significant share of US geostrategic attention, in that situation we might see a different balance of power emerging in the Indo-Pacific.

Given the ideological proclivities of policymakers in Washington, in London, in Brussels, it does appear there is a deeper reluctance to change course.

In recent years, the US has been trying to strengthen old alliances and develop new partnerships in the Indo-Pacific that are very much centred on managing China’s rise.

That strategy will certainly face an uphill task if the US-Russia crisis leads Moscow to deepen ties with China further and take positions in the Indo-Pacific that are far more antagonistic to the US.

Russia, so far, has not extended the level of military strategic activities to truly impact US security or the security of US allies in the Indo-Pacific. They have been far more measured, including in their military exercises with China.

But should that become an important part of Russian security policies, it would obviously undermine the US’ grand strategy in the Indo-pacific.