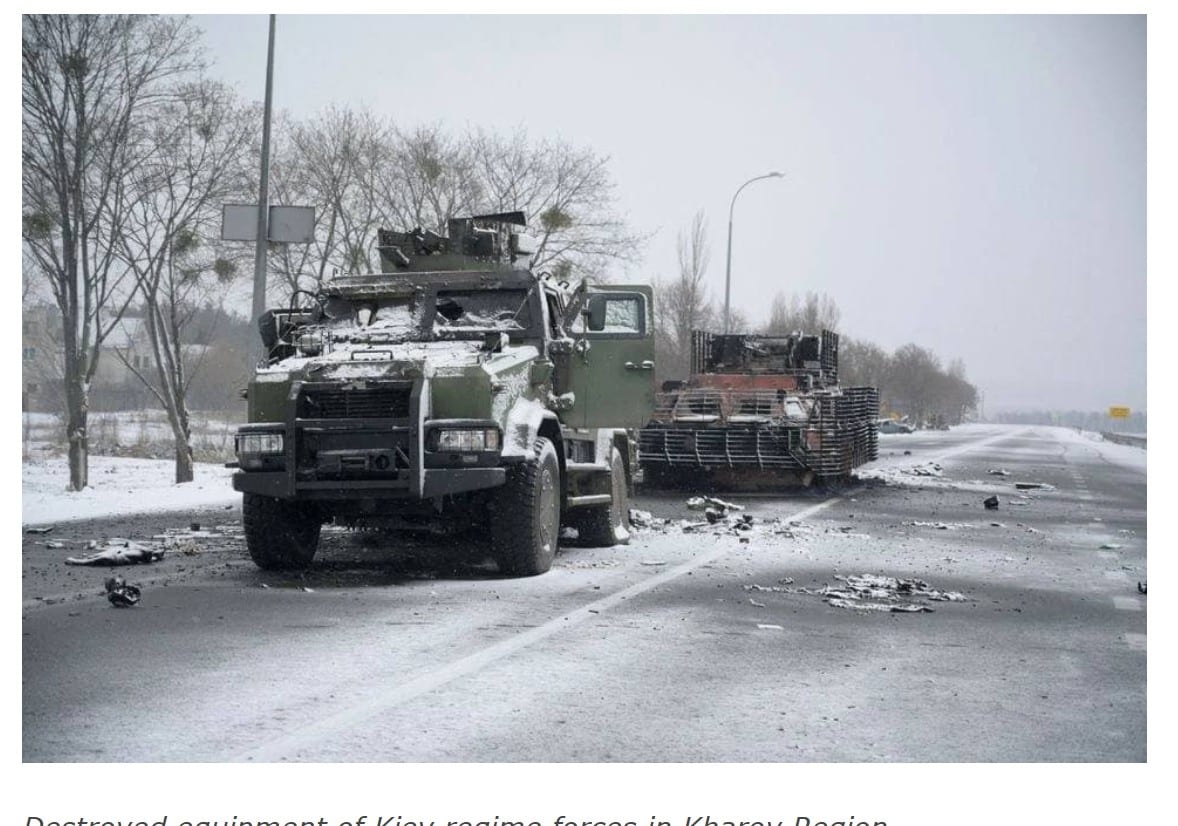 In the morning of February 27, Russian forces launched an operation to take control of Kharkov city. During the first days of the operation, Kiev regime forces showed notable resistance in the area and were able to to destroy some reconnaissance units of the Russians there. Additionally, initial reports about the blocking of the city were not confirmed.

Nonetheless, now it seems that the Russian military is set to really take control of Kharkov and destroy the crucial military logistical infrastructure of the Kiev regime there. This city and its surroundings are among the key defense points of the regime in the northeast of Ukraine.

Actions of Russian troops on the ground also show the readiness to employ direct force against resisting units of formations of radical nationalists that are the core of the pro-Kiev force.

The Russian Army has reached the centre of #Kharkov after a night of fierce fightings.
The second largest Ukrainian city is almost entirely controlled by Russian forces.#Ukraine pic.twitter.com/cFSu32VXgP

Another confirmation of Russian Military in Kharkov — located at Sapernaya Street. Assault group of the Armed Forces of the Russian Federation gets in a firefight with Ukrainians hidden amid civilian houses pic.twitter.com/rLEzDiEWCI

Russian troops are reportedly entering Kharkov from the North pic.twitter.com/SUYeYK4G0p

Russian infantry is also moving in as some parts of Kharkov is captured by Russian forces. During the whole night, the Ukrainian positions in the Kharkov front was obliterated by numerous rocket barrage. pic.twitter.com/DBJyVMwDgf

The advance of Russian forces also continue in the Kiev region. The Russians aim to block the city contrary to Ukrainian claims about the ‘ongoing clashes for it’. The chaos in the Ukrainian capital is created by the loss of coordination of Kiev regime forces and the ‘wise decision’ to give thousands of automatic weapons to civilians (mostly various criminals).

Russian forces enter the town of Bucha in Kiev Region. Pro-Kiev sources claim that there were ‘fierce clashes’ in the area:

BREAKING: We can confirm that the Ukrainian defence line from Gostomel to Kiev has been broken through by Russian Forces — Russian tanks are rolling into Kiev from Gostomel. Filmed 45 mins ago pic.twitter.com/MRP8qVwK4q

Next to the intelligence building in Kiev, a group of Ukrainian soldiers burn paper documents, probably sensitive or confidential texts, to prevent them from ending up in Russian hands. pic.twitter.com/qvprN2voRN

Su-25 hit by a MANPAD in the Kherson region pic.twitter.com/W8mBbogleL

Meanwhile, the Russian Defense Ministry reported that during the past 24 hours Russian forces blocked the cities of Kherson and Berdyansk, the town of Genichevsk and Chernobaevka air base.

The same report said that LPR forces reportedly took control of Novoakhtyrka, Smolyaninovo, Stanichno-Lugansk. Since the beginning of the offensive operation, they have advanced 52 km. DPR forces advanced 12 km in the past day and took control Pavlopol and Pishchevik.

Taking into the account the direction of the advance in the south, the city of Mariupol, a key regime stronghold in Donetsk Region, is under the threat of encirclement.

In Kharkov Region, the Defense Ministry said, the 302nd anti-aircraft missile regiment of the Ukrainian Armed Forces, equipped with Buk M-1 systems, voluntarily laid down its arms, 471 servicemen were detained.

In own turn, the Kiev side insists that its forces inflicted thousands of casualties to the Russians, shot down dozens of aircraft and detained hundreds of ‘Russian spies’. Kiev officials change these numbers change almost every hour and create Twitter victories all around. The apparent media hysteria of the Kiev regime is the sign of the collapse of its defense. Despite this, it is important to note that the Russian really suffered casualties and lost (according to video evidence) at least several reconnaissance units and supply columns as well as advancing columns of military equipment that found themselves too deep inside the territory controlled by the regime. The very soft approach of the Russian military towards troops of Kiev regime forces was among the key reasons of these situations. Now, on the fourth day of the operations, moving Russian troops have likely adapted their approach to deal with aggressive and well armed units of pro-Kiev radicals.

As to the diplomatic process and possible negotiations, the Kiev regime sabotages any Russian attempts in this direction.

In own turn, Ukrainian President Volodymyr Zelensky rejected talks insisting that Kiev is not happy with the proposed place. Earlier, Kiev claimed that it will dictate own terms for negotiations and be fine with talks in some place like Poland.

The case of the Minsk agreements on the conflict in Donbas clearly demonstrated that the Kiev regime is not able and does not want to follow any signed accords. Therefore, the current diplomatic dead end will likely be overcome only when all military infrastructure and forces of the criminal NATO-backed regime established in Ukraine are eliminated.