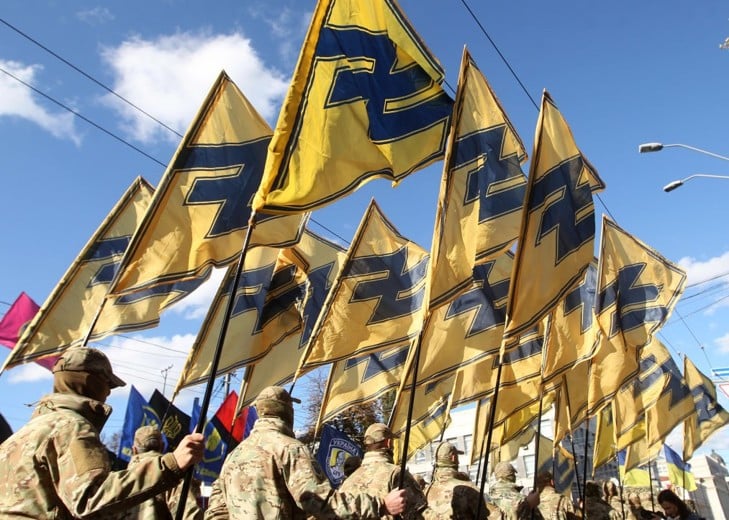 Russian President Putin said his troops will fight the Nazis in Ukraine. Putin said, “Its goal is to protect people who have been subjected to bullying and genocide … for the last eight years. And for this, we will strive for the demilitarization and denazification of Ukraine.” Many western TV reporters scoffed at the idea as nonsense. After all, how could a Jewish President of Ukraine, Volodymr Zelenskiyy, allow Nazis to support the government?

Ever since 2015 [1], the CIA has been running a training camp for Nazis in Ukraine, to act as a military deterrent to Russia. The US Congress passed a bill to fund the program which is connected to the Pentagon.

Remember that it was the CIA program in Afghanistan that funded Osama bin Laden, and others following Radical Islam, to fight the Russians.  That group became Al Qaeda and attacked NYC on 9/11, which in turn created the US war on Afghanistan and Iraq.

The CIA program ‘Timber Sycamore’ [2] trained and funded Radical Islamic terrorists, that Washington called “Freedom Fighters”, in Syria until 2017 when President Trump cut the program off.

The Nazi party of Hitler’s Germany in WW2 was anti-Semitic. But, the political ideology was fascist.  The Neo-Nazi groups in Ukraine are fascists, white supremacists, and Anti-Russian.  This allows the Ukrainian Nazis to partner with the Jewish President who is fighting Russia.

When the pro-Russian President of Ukraine was ousted, it was Nazis who fought to create a new Ukraine [3], devoid of Russian influence.  One of the first directives of the new Ukraine was to discharge all soldiers in the Ukrainian Army who was ethnically Russian.  Suddenly, ethnic Russians in Ukraine were targeted as the enemy.  Only the ‘pure’ Ukrainians deserved peace and prosperity in Ukraine.  Those residents living in the far Eastern regions on the border with Russia, who were ethnically Russian and spoke Russian, were targeted by the Nazi groups.  Fighting broke out in a civil war, as the Russian speakers fought to defend themselves and their homes.

There is a second cause of the conflict which is the refusal of Ukraine and its US-NATO partners to consider the national security issues facing Russia after the NATO build-up in Eastern Europe brought NATO and its missiles pointing at Moscow literally on the border of Russia.

“Ukraine really does have a far-right problem, and it’s not a fiction of Kremlin propaganda. And it’s well past time to talk about it,” explained journalist and expert on the Ukrainian far-right, Michael Colborne [4], who wrote a book on the Azov movement. The Azov Regiment dates back to early 2014 and is now an official unit of the Ukrainian National Guard, and its political wing the National Corps political party participated in the vote in the parliamentary elections in 2019. Colborne added, “The Azov movement tries to be a one-stop-shop for all things far-right. There’s also a bevy of loosely affiliated but more extreme subgroups under its umbrella as well, including open neo-Nazis who praise and promote violence.”

Ukraine is home to several nationalist paramilitary groups, such as the Azov movement, and Right Sector, which espouses neo-Nazi ideology. Svoboda is a far-right party that holds a seat in parliament.

At the UN Security Council, Ukrainian Ambassador Sergiy Kyslytsya requested a moment of silence to pray for those killed, while Russian Ambassador Vassily Nebenzia said that the remembrance should include people who have died in eastern Ukraine’s Donbas region, referring to the ethnic Russians that live there and have been under almost constant attack since 2014 from the Nazi paramilitary.  Putin has accused the Ukrainians of genocide against the ethnic Russians in the Donbas.  2016 report by the Office of the United Nations High Commissioner for Human Rights found that Azov soldiers had raped and tortured civilians during Russia’s 2014 invasion of Ukraine [5].

In response to the current conflict in Ukraine, Facebook [6] will allow its billions of users to praise the Azov Battalion, which had previously been banned from being freely discussed under the company’s Dangerous Individuals and Organizations policy. The armed militia is known for its hardcore right-wing ultra-nationalism and neoNazi ideology. Azov soldiers march and train wearing uniforms bearing icons of the Third Reich, and in 2010, the battalion’s first commander and a former Ukrainian parliamentarian, Andriy Biletsky, stated that Ukraine’s national purpose was to “lead the white races of the world in a final crusade … against Semite-led Untermenschen [subhumans].”

Facebook had categorized the Azov Battalion alongside the Islamic State and the Ku Klux Klan because of their propensity for “serious offline harms” and “violence against civilians.” The Facebook memo provides two examples of posts that would not be allowed under the new policy: “Goebbels, the Fuhrer, and Azov, all are great models for national sacrifices and heroism” and “Well done Azov for protecting Ukraine and its white nationalist heritage.”

European far-right militia leaders have been busy on the internet over the past few days asking for funds, recruiting fighters, and planning for travel to the front lines in Ukraine to fight the Russians.  Militia leaders in France, Finland, and Ukraine have urged their supporters to join the fight according to the SITE Intelligence Group, a private organization that specializes in tracking extremist groups.

Rita Katz [6], the director of SITE, said that numerous far-right white nationalist and neo-Nazi groups throughout Europe and America had shown support for Ukraine, and were seeking to join paramilitary units in battling Russia. She said these fighters wanted combat training and were ideologically driven.  French far-right groups were mobilizing as well.

A 2020 report from the West Point US Military Academy’s Combating Terrorism Center said, “US-based individuals have spoken or written about how the training available in Ukraine might assist them and others in their paramilitary-style activities at home.”  A 2018 FBI affidavit said that Azov “is believed to have participated in training and radicalizing United States-based white supremacy organizations,” including members of the white supremacist Rise Above Movement, prosecuted for the Charlottesville “Unite the Right” rally.

Washington has been assisting Nazis in Ukraine through Obama, Trump, and Biden administrations because they are seen as a threat to Russia.

In late 2021, only the United States and Ukraine voted against a UN draft resolution “combating glorification of Nazism, neo-Nazism and other practices that contribute to fueling contemporary forms of racism.” Both countries have consistently voted against this resolution every year since 2014, which coincides with the anti-Russian Nazi militias formed in Ukraine, and supported by the US.