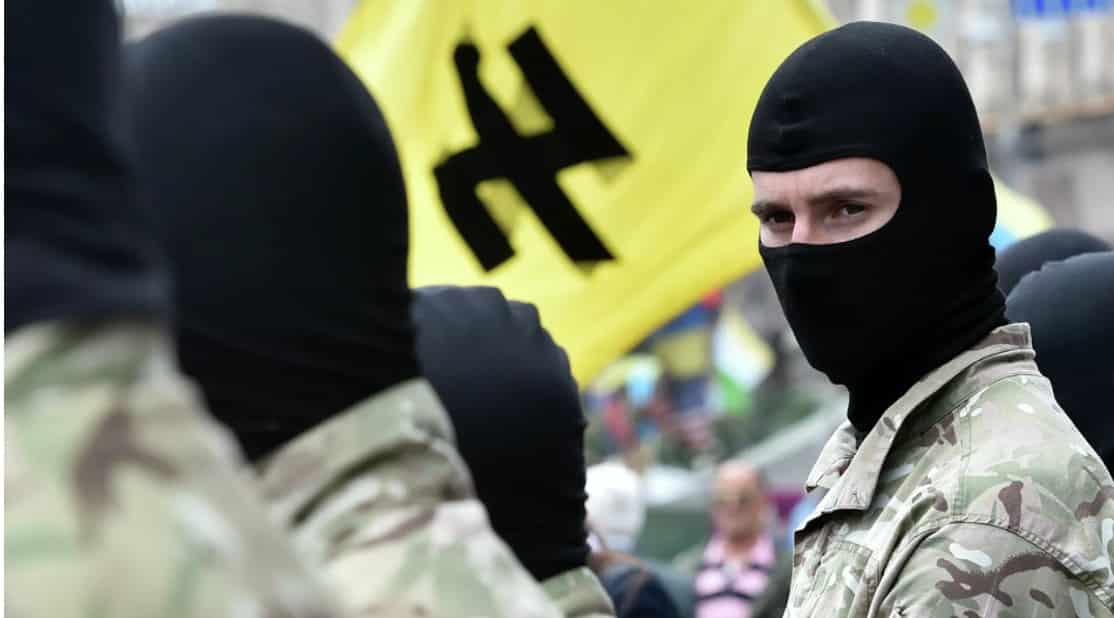 Russia has been conducting its “special operation” to protect the Donetsk and Lugansk People’s Republics (DPR and LPR) to a chorus of Western mainstream media persistently slamming its actions as “an invasion.” However, the latter for years turned a blind eye to crimes committed by the Ukrainian military with support from neo-Nazi militias.

The Azov Regiment, an openly neo-Nazi unit operating within Ukraine’s National Guard that adopts Swastika-style runic insignia, along with the Right Sector*, a hardline nationalist paramilitary union notorious for its atrocities, are accused of being complicit in crimes committed in Donbass, Eastern Ukraine, according to a recent statement by the Investigative Committee of the Russian Federation.

In total, the ICR is hoping to bring to court over 400 criminal cases pertaining to the events in Donbass, where the eight years of conflict have witnessed over 2,600 civilians killed, and some 5,500 more injured.

Since the Western-backed coup in Kiev in 2014, political organisations associated with neo-Nazis infiltrated Ukrainian mainstream politics as the Ukrainian government sent troops to try to crush the Donbass uprisings by force.

As Ukraine waged war against breakaway forces in the Donetsk and Lugansk People’s Republics, the Neo-Nazi Groups in Ukraine gained notoriety for their belligerent rhetoric towards the population of the country’s east, as well as for eagerly participating in the civil war.

The Azov Batallion was originally a volunteer militia formed in May 2014 shortly after the coup in Kiev.

The unit’s first commander was right-wing nationalist Andriy Biletsky, who led the paramilitary national socialist group called “Patriot of Ukraine” and was the founder of a neo-Nazi group, the Social-National Assembly (SNA) in 2008. New volunteers for the Ukrainian interior ministry’s “Azov” battalion line up after taking part in an exam before heading to the frontlines in eastern Ukraine, at the battalion’s training centre in Kiev, Ukraine, June 13, 2015

In 2010, Biletsky, a former parliamentarian, apparently said that Ukraine was meant to “lead the white races of the world in a final crusade … against Semite-led Untermenschen (subhumans)”by reports in a spate of Western mainstream outlets.

Azov readily entered the fray as nationalists and neo-Nazis began illegally seizing power across Ukraine, clashing with opposing forces of the so-called “anti-Maidan” movement.
Events in Odessa on 2 May 2014 became one of the definitive moments of that period, as street fighting between neo-Nazis and anti-Maidan protesters prompted the latter to barricade themselves in a local trade unions house.

With backing from the new Ukrainian authorities, the encircled building was set ablaze with petrol bombs. Almost 50 people were killed, either burned alive or while jumping to their deaths from windows to escape the flames. Some 250 other protesters were injured in the horrific events.

Azov took part in subsequent hostilities in Donbass and was incorporated into the National Guard of Ukraine in November 2014, although its members continued to wear neo-Nazi and SS-like symbols and regalia and openly express neo-Nazi views.

Their logo echoes the Wolfsangel, one of the original symbols used by the 2nd SS Panzer Division Das Reich. Representatives of the Azov Battalion, however, have claimed their symbol is an abbreviation for the slogan “National Idea” in Ukrainian.

Ukrainian authorities did not bother to conceal the fact that in 2014, Azov comprised neo-Nazi-leaning volunteers from countries such as Sweden, Italy, Russia, France, Belarus, Canada, and Slovenia.

Despite the adoption of the 2015 Minsk Accords that were aimed at ending the civil war by reintegrating the Donbass into Ukraine in exchange for constitutionally-guaranteed autonomy, Kiev refused to implement a peace deal. Azov members took an active part in Donbass hostilities.

Russia’s Spec Op: Why Kiev & Its Western Backers Had Failed to Implement Minsk Accords for 8 Years

In 2016, the Office of the UN High Commissioner for Human Rights (OHCHR) accused the Azov Battalion, officially upgraded to a regiment in January 2015, of committing war crimes such as mass looting, unlawful detention, and torture. Currently, the Azov “Special Operations Detachment” is engaged in the Ukrainian army’s counter-reconnaissance and special weapons operations.

The Russian Investigative Committee has opened a criminal case against a number of fighters from Azov units for crimes such as kidnapping, torture, use of prohibited means, and methods of warfare.

Another infamous group is the Right Sector*, originally set up as an alliance between Ukraine’s nationalist groups in November 2013. It subsequently announced that they had formed a special “Donbass” battalion for its paramilitary operations in the breakaway region. Tyres are set on fire during a rally held by members of the far-right radical group Right Sector, representatives of the Ukrainian volunteer corps and their supporters in central Kiev, Ukraine

The group-turned-political party says it wants to help build a “nationalist Ukrainian state and stage a nationalist revolution” in the county. Supporters of the Right Sector radical movement during a people’s veche (assembly) on Independence Square.

Ex-Right Sector leader Dmytro Yarosh described himself as a follower of the notorious Nazi collaborator Stepan Bandera. The group has vehemently advocated a forceful settlement of the Donbass crisis, rejecting a negotiated approach.

It took a similar stance regarding Crimea, which became part of Russia in a referendum held in March 2014 in which nearly 96 percent of Crimeans voted to rejoin the country.

Moscow has repeatedly stated that the decision made by the Crimean people was conducted in full compliance with international law and the UN Charter.

*The Right Sector is an extremist group outlawed in Russia